With local, national and global impacts, climate change has become a worldwide priority. Like many other countries, Canada is committed to protecting the environment and acting on climate change. As an example, during the 2015 Conference of the Parties, also known as the COP 21 Paris Agreement, Canada and 194 other countries ratified an ambitious agreement to fight and balance climate change. Some of the commitments Canada has taken are to limit the temperature rise below 2°C and preferably below 1.5°C by the year 2100 and to reduce its greenhouse gas emissions of about 30% below 2005 levels by 2030. Other Canadian commitments include for instance a $2.65 billion investment for emissions-reduction projects for developing countries.

These ambitious commitments will therefore require Canadians to adopt new behaviours and it will require Canadian businesses and researchers to develop technological and breakthrough innovations in the Climate Change Mitigation Technology (CCMT) sector.

The Canadian Intellectual Property Office (CIPO) has recently published a comprehensive report providing a broad worldwide and Canadian view of the patenting activity in the CCMT sector.

This article summarizes the first portion of that report and its principal findings specifically focused on the global Canadian perspective. A series of subsequent articles relating to other portions of that report, namely Transport, Renewable Energy, Buildings, Traditional Energy, Clean Energy Enablers, Smart Grids and Carbon Capture will be published in the future.

The present article first discusses the data that was used in CIPO’s report, it then focuses on the methodology for analyzing the data and then provides insight on the overall Canadian patenting activity in the CCMT sector with a focus on a major difference between Canadian researchers and Canadian businesses.

In order to evaluate the patenting activity in Canada relating to the CCMT sector, CIPO used tagging schemes which specifically target Climate Change and Mitigation Technologies and which were developed by the United Nations Environment Program (UNEP) and by the European Patent Office (EPO). The data used in CIPO’s report has therefore been extracted from the European Patent Office Worldwide Patent Statistical Database (PATSTAT) which gathers over 100 million patent documents. The data used in this report provides trend analyzis in patenting activity from the Canadian researchers perspective and from the Canadian businesses perspective from the beginning of 2008 to the end of 2012 in the following categories of the CCMT sector: Transport, Renewable Energy, Buildings, Traditional Energy, Clean Energy Enablers, Smart Grids and Carbon Capture. As stated previously, each category will be analyzed in further articles.

The term “patent family” refers to at least two patent applications relating to the same invention and the term “high-value invention” relates to patent families filed in more than one jurisdiction.

The analyzis of the data regarding the patenting activity in the CCMT sector provided by CIPO, focuses on patent families which include patent applications filed in at least two jurisdictions.

In order to provide a comprehensive comparison between Canada and countries such as China, South Korea, Australia, Denmark or G7 countries, CIPO used an index, named the Revealed Technological Advantage (RTA) that was developed by the OECD. This index computes Canada’s innovative strength in the CCMT sector and informs on the patenting activity of countries of different sizes on a relative basis. This index is therefore capable of providing an indication whether or not Canadian researchers and businesses have a technological advantage over foreign researchers and businesses. If the RTA is greater than one, a certain technological advantage exists while if the RTA is below 1, no technological advantage seems to exist.

III. Canadian Patenting Activity in the CCMT sector - A major difference between researchers and businesses.

Canadian researchers are known worldwide for their contributions to highly innovative work. In fact, according to the report, a study published in Canada and commissioned by Innovation, Science, and Economic Development (ISED) suggests that the presence of Canadian researchers as co-inventor on a US patent increases the importance of that patent by about 13% while foreign co-inventors tend to reduce it.[1]

Between 2008 and 2012, worldwide patenting activity in the CCMT sector has grown 29% with an annual growth rate of about 7%. However, the patenting activity for Canadian researchers fell about 8% during that five year period mainly due to a decrease of about 30% in patent fillings in 2012.

As shown in Figure 1, Canadian researchers tend to have a technological advantage globally in the CCMT sector relative to other countries. For instance, this graph shows a predominance of European countries, especially Denmark, France and Germany, in the CCMT sector while countries such as the US, Great Britain or Australia tend not to have any technological advantage in this sector. 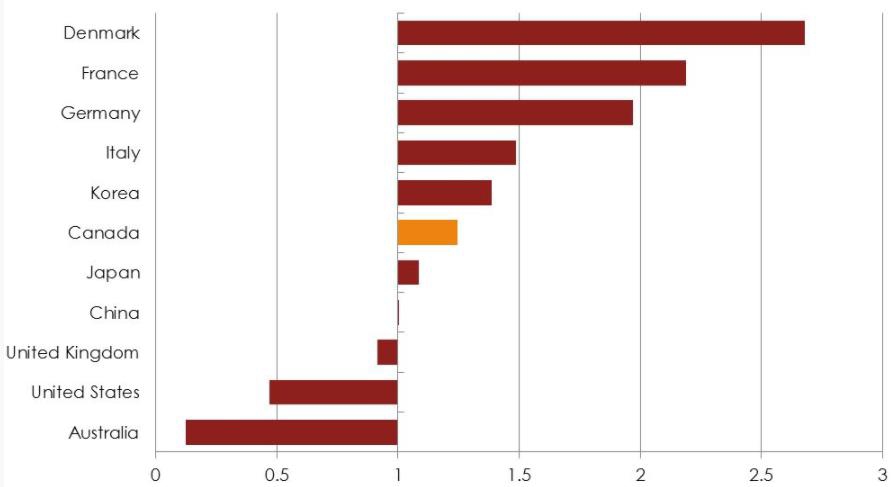 Figure 2, below, further reveals that Canadian researchers tend to be more specialized in categories such as Smart grids or Buildings while less specialized in the Transport category. 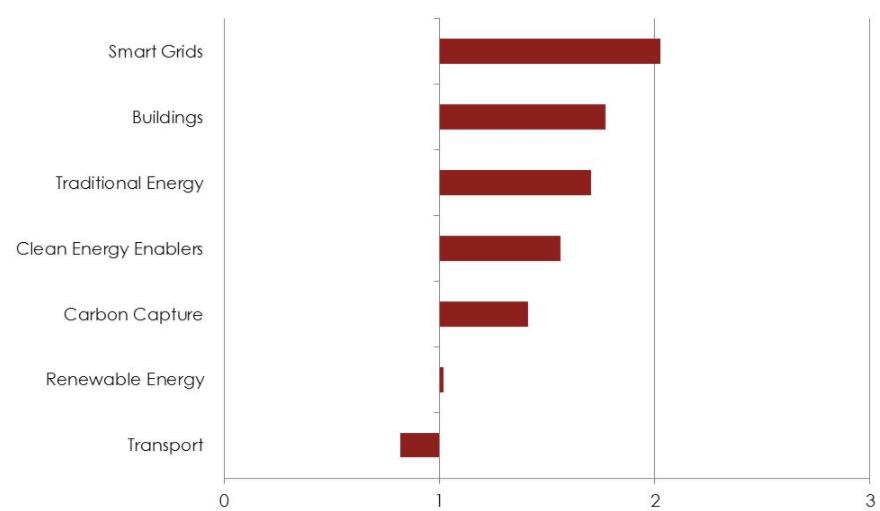 Although not shown herein, the report also reveals that top Canadian researchers working in the CCMT sector are working for companies from Canada, such as Blackberry Limited (CA), Hydro-Quebec (CA) and from other countries, principally companies such as Philips (NL), Société BIC (FR) or Intelligent Energy Limited (GB).

With reference to Figure 3, it is disappointing to see that Canadian businesses appear not to have any technological advantage overall in the CCMT sector compared to other countries and that they are ranked last among the G7 countries. Meanwhile, businesses from Denmark, Germany and France tend to have a Technological Advantage in the CCMT sector. 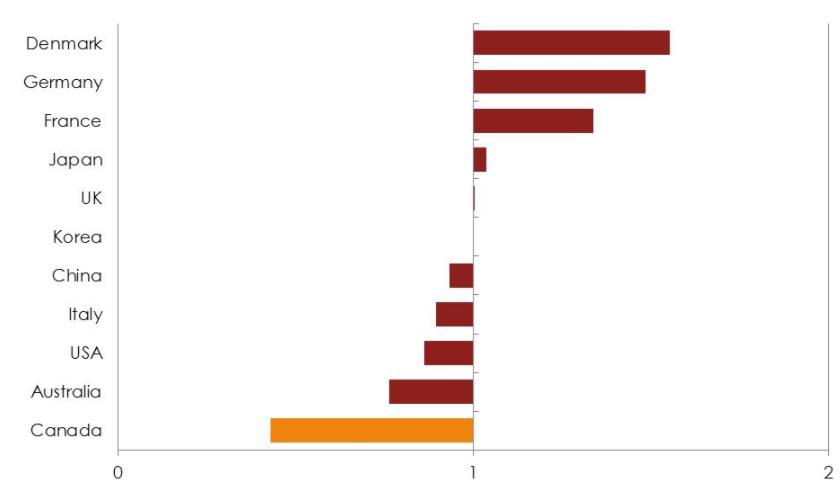 Nevertheless, Canadian businesses tend to have a slight technological advantage in the Carbon capture category of the CCMT sector (see Figure 4 below). 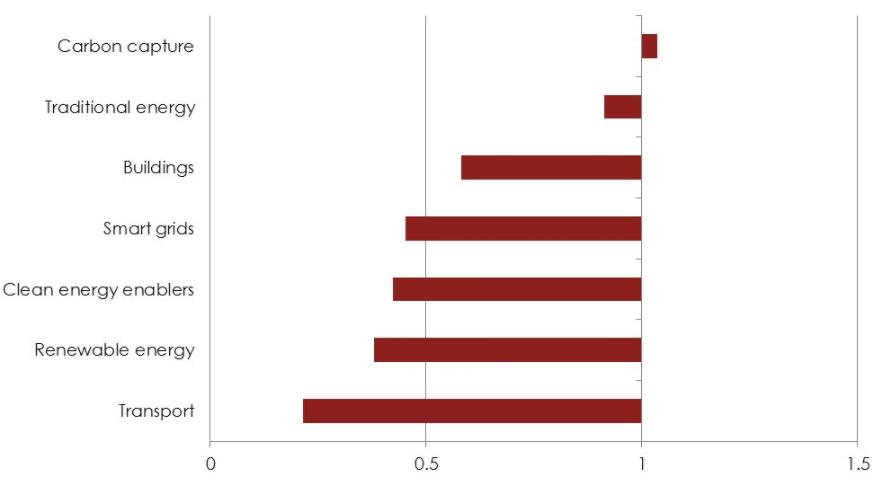 Therefore the data in the report seems to suggest that the innovation work of Canadian researchers benefits mainly foreign companies. Indeed, the top 25 international businesses in the CCMT sector include mainly US and Asian companies such as Samsung Electronics (KR), General Electric (US), GM Global Technology Operations Incorporated (US) and Panasonic (JP). Disappointingly, there are no Canadian companies in this ranking. Nevertheless, the report teaches that a few Canadian businesses appear to patent heavily in the Transport and Clean Energy categories of the CCMT sector. These companies include Bombardier Inc., Pratt and Whitney Canada Corp., Westport Power Inc. and the University of British Columbia.

Climate change is a global issue that all countries around the world are facing. The CCMT sector is a very important market in which countries worldwide have increasing needs and in which they are going to heavily invest.

The report provided by CIPO shows that, although Canadian researchers have a technological advantage globally in the CCMT sector, Canadian businesses do not. This suggests that Canada has the “brain power” to address the technical challenges associated with climate change but that inventions made by Canadians mostly benefits companies outside Canada. It would therefore be in the best interest of Canada that Canadian businesses use the national expertise to innovate more in the CCMT sector and that they secure their innovations by patenting.

Innovation in the CCMT sector is highly favorable because it will not only help Canada in reaching the Climate Resolutions taken at the COP21 Paris Agreement, it will also attract investments in Canada and stimulate our economy.

To view all formatting for this article (eg, tables, footnotes), please access the original here.
Fasken - Serge Lapointe and Bryan Parahy
﻿
Back Forward