PRC Civil Code Amends the Rule on Change of Circumstances

The Civil Code of the People's Republic of China (《中华人民共和国民法典》, hereinafter referred to as the "PRC Civil Code"), which took five years to compile, was published on May 28th this year and will be put into force on January 1st 2021. It has attracted wide attention from various circles of society, and experts and scholars have in turn analysed and interpreted its various provisions. This article will offer an analysis of the amendment to the "Rule on Change of Circumstances" based on the current laws and judicial interpretation and the 19th Section of the book Application and Judicial Practice of the Civil Code (《<民法典>适用与司法实务》)1.

Based on Article 26 of the Supreme People's Court's Interpretation of Several Issues Concerning the Application of PRC Contract Law (II) (《最高人民法院关于适用<中华人民共和国合同法>若干问题的解释（二）》, hereinafter referred to as "Judicial Interpretation II of PRC Contract Law"), Article 533 of the PRC Civil Code has revised the definition of Change of Circumstances and the remedies available to the parties affected by it.

1. Deleting the restrictive provisions of "not caused by force majeure" and "unable to achieve the purpose of the contract"

Firstly, the differences and connections between "Change of Circumstances" and "Force Majeure" can be summed up as follows: 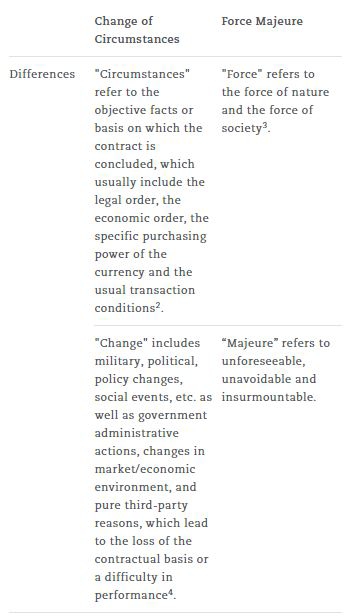 Article 533 of the PRC Civil Code addresses such a situation and provides a possible solution for the party affected by force majeure under the above circumstance by deleting the restrictive wording "not caused by force majeure" and "unable to fulfil the purpose of the contract" from Article 26 of the Judicial Interpretation II of PRC Contract Law.

2. Adding a pre-set negotiation procedure and arbitration as an alternative method of dispute resolution

Firstly, Article 533 of the PRC Civil Code adds that "the party adversely affected may renegotiate with the other party". The word "may" here seems to give the affected party the right to choose, either to negotiate with the other party or not. However, combined with the content of the second half of the clause - "if negotiation fails within a reasonable period of time, the parties may request the Court or the arbitration institution to change or terminate the contract" -it appears that the newly added wording of this clause provides a pre-set negotiation procedure for the party adversely affected by the change of circumstance by seeking a remedy from the Court or arbitration institution. On the one hand, it encourages the continued performance of the contract, yet, on the other, if the party affected by the force majeure does not negotiate with its counterpart, it may, in practice, encounter some obstacles when seeking relief from the Court or arbitration institution.

Attached is a comparison between the provisions of "Change of Circumstances" in the Judicial Interpretation II of PRC Contract Law and the PRC Civil Code: 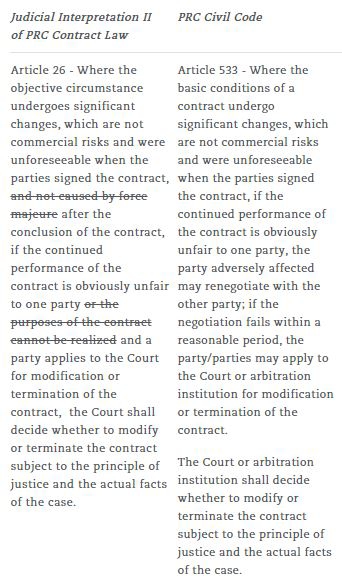