In this decision, one board of appeal confirmed that concepts for persisting database objects are technical. Here are the practical takeaways of the decision T 0731/17 (Object persistence/MICROSOFT TECHNOLOGY LICENSING) of 15.1.2020 of Technical Board of Appeal 3.5.07:

This European patent application relates to persisting objects in a data store. The background section explains that Microsoft SQL SERVER, which integrates the Microsoft Windows .NET Framework Common Language Runtime (CLR), allows creating a “user defined type” (UDT) class, instances of which can then be persisted in the database store.

UDTs extend the scalar type system of the database and can be used in the same contexts as a system type, such as in column definitions, variables, parameters, function results, cursors, triggers, and replication. The class that defines a UDT can include methods that implement specific behaviours on objects of that type.

The invention aims to reduce the processing overhead associated with allocating memory for storing the full object at runtime, deserialising and populating all parts of the object, essentially by providing metadata that allows “direct structural access” to the field values in the serialised representation of the persisted object. 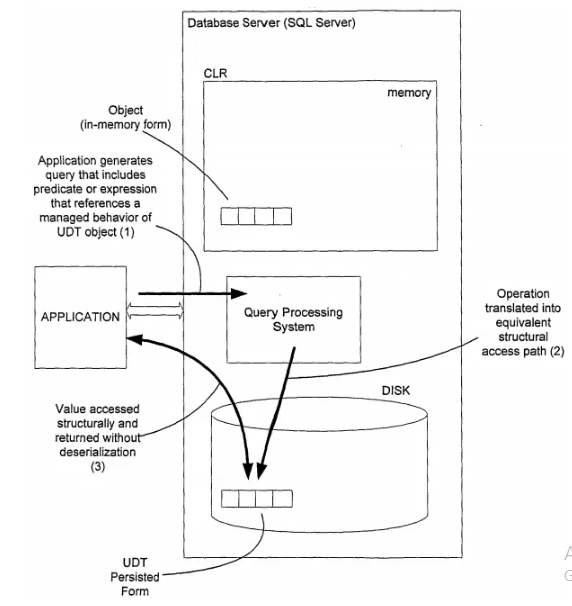 Here is how the invention is defined in claim 1:

In the first instance decision, the examining division had argued that the only technical features of then claim 1 were “system”, “database store”, “server” and “persisted values” and that all other claim features, when taken in isolation, were non-technical because they were directed to a “non-technical rationale for providing ‘more efficient storage and retrieval of objects persisted in a database store'”.

The examining division then cited decision T 1954/08, arguiing that the non-technical features did not interact with the technical features to make a technical contribution because “effects stemming from the algorithmi[c] definition of a method do not define a technical character of the corresponding features”. Consequently, claim 1 was found to lack an inventive step over a “notoriously known distributed computing environment comprising general purpose computers and a network”.

The board, however, held that this reasoning is flawed:

According to decision T 1954/08 of 6 March 2013, reasons 6.2, “the sole processing speed” of a computer-implemented algorithm and “the sole amount of memory” it requires are not suitable criteria for determining whether a method step contributes to the solution of a technical problem.

The board also found that the inventive-step reasoning itself as provided by the examining division was not convincing:

In the present case, any attempt to properly formulate a problem that potentially would have led the skilled person from a network of general-purpose computers to the subject-matter claimed should have confronted the Examining Division with the fact that the claim, not analysed as a collection of disconnected terms but as a whole, contains various technical concepts.

For example, the claimed method involves the concept of accessing information contained in a database store via a database server. Such technical functionality is not disclosed by a network of general-purpose computers. The Board is aware that database management systems were well known at the priority date of the application (see document D1, column 1, lines 27 to 30), but that does not mean that an inventive-step reasoning can silently ignore the concept.

6.5 The separate section of the decision discussing documents D1 and D2 contains no detailed analysis. If the Examining Division was of the view that document D1, in column 3, lines 56 to 62, discloses direct access to object attributes “without de-serialization” because the cited passage does not positively state that serialisation takes place, the Board observes that no disclosure of serialisation is not a disclosure of no serialisation.