On 12 November 2020, the Australian Prudential Regulation Authority (APRA) released a revised draft Prudential Standard CPS 511 Remuneration for consultation (Revised Draft CPS 511). The revised standard has moved away from the prescriptive requirements of the initial consultation draft, towards a ‘principles-based approach’, giving banks, superannuation funds and insurers greater latitude to determine and tailor their own remuneration thresholds.

The key takeaways – What does this mean for APRA-regulated entities?

What are the proposed changes in Revised Draft CPS 511? 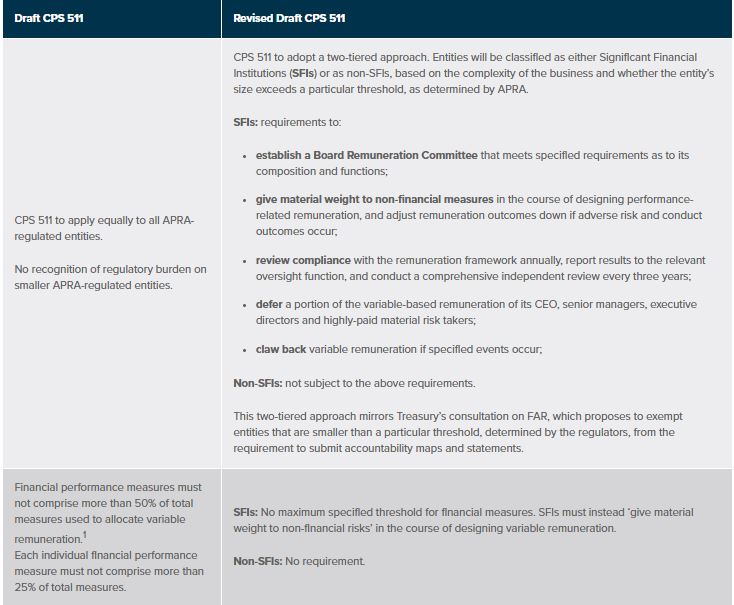 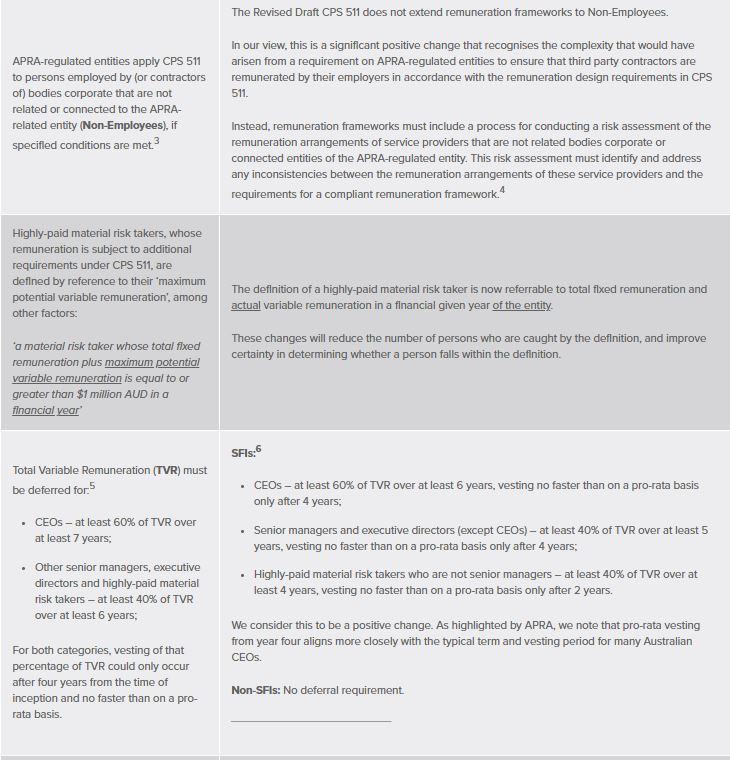 “from the executive suite to the front line, staff were measured and rewarded with reference to profits and sales”, leading to “the pursuit of short term profit at the expense of basic standards of honesty.”

As recommended by Commissioner Hayne,11 APRA’s approach to the supervision of remuneration through CPS 511 in many ways appears to draw on the Principles for Sound Compensation Practices published by the Financial Stability Board in 2009,12 which (among other principles) recommended that the Board of financial services businesses must actively oversee the design and operation the compensation system of their organisation.

While CPS 511 focuses on personnel that have a key-decision-making role in APRA-regulated entities, such as senior managers and risk and financial control personnel, CPS 511 does not deal with the remuneration arrangements for frontline sales staff, which was a focus of the Retail Banking Remuneration Review report released by Steven Sedgwick AO in April 2017. However, it is important to remember that CPS 511 can still have an impact on the remuneration of management personnel who supervise distribution and frontline sales teams.

How can APRA-regulated entities move forward with CPS 511 and FAR?

In its 2020–2024 Corporate Plan released on 31 August 2020, APRA highlighted the implementation of both CPS 511 and FAR as outcomes that it will seek achieve as part of its work to ‘transform governance, culture, remuneration and accountability across all regulated entities’. Both regimes will be closely intertwined.

As APRA Deputy Chairman Helen Rowell explained in a speech to the Australian Institute of Company Directors on 20 February:

APRA-regulated entities looking to effectively implement CPS 511 should consider performing their review of remuneration frameworks in conjunction with a review of possible accountable persons in preparation for FAR, and develop an implementation project plan that will ultimately deliver compliance with both regimes. This will allow APRA-regulated entities to escape the need to perform two separate reviews with respect to two regulatory regimes covering many of the same persons within an organisation.

As Helen Rowell’s speech makes clear, both regimes will go hand in hand, and in that regard it makes sense that a cohesive approach to implementing CPS 511 and FAR together will be more effective than commencing two separate implementation projects.

Finally, a cohesive implementation approach will allow APRA-regulated entities to need to reconsider the terms (i.e. the accountabilities and remuneration) of their senior executive only once, and make a single round of required revisions to their governance arrangements.

In developing these requirements, we believe it would be helpful for APRA to articulate how it considers that public disclosure at a greater level than that currently in place would lift standards of practice and promote market discipline. We note that many of the obligations proposed in the Revised Draft CPS 511 already address concerns around remuneration practices.

What is the context of this 2nd consultation on CPS 511?

In July 2019, APRA released Draft CPS 511 and a consultation paper that attracted rigorous feedback from industry and other stakeholders, including 79 formal submissions. As a result, nearly every aspect of the Draft CPS 511 has been reconsidered in the Revised Draft CPS 511.

In our submission to APRA on the Draft CPS 511, we highlighted that one of the potential unintended consequences of the stronger regulations in the Draft CPS 511 was that APRA-regulated entities will be at a disadvantage in recruiting talent, particularly talent that can work in other sectors outside the financial services sector or in other jurisdictions outside Australia.

APRA appears to have responded to much of this kind of feedback from stakeholders. In its consultation paper (Second Consultation Paper) accompanying the Revised Draft CPS 511, APRA claims that the Revised Draft CPS 511 delivers a more principles-based approach, giving boards ‘more flexibility to strengthen remuneration practices in a way that is appropriate to their business model and particular risks’.

CPS 511 was originally intended to commence from 1 July this year. But given the significant changes that have been proposed, APRA has commenced a fresh round of consultation on the Revised Draft CPS 511, with a request for feedback by 12 February 2021.