March was a big month for the LIBOR endgame. There were several big announcements, some important (but technical) developments, and new deadlines. Simply put, the March developments matter to the fund finance community because they provide certainty to market participants as to the date by which credit agreements that reference USD LIBOR will transition to an alternative reference rate and a date by which new credit agreements may not use USD LIBOR. Note that while there were other developments in March that impact a variety of financial products, this article will cover the developments that matter most to the fund finance market.

Here we will break it down for you and put it in context to help you make sense of it all, and make sure you look great in front of your boss.

Bullet 1: On March 5th the IBA and FCA made announcements regarding the dates when the publication of LIBOR will cease as well as the non-representativeness of various settings of LIBOR.

The FCA issued its own announcement on March 5, 2021. In its announcement, the FCA confirmed that the IBA had notified it of its intent to cease publishing all LIBOR settings and that all 35 LIBOR settings will cease to be provided by any administrator or will no longer be representative. It too left open the possibility of establishing new powers where it could require IBA to produce certain LIBOR tenors on a synthetic basis. 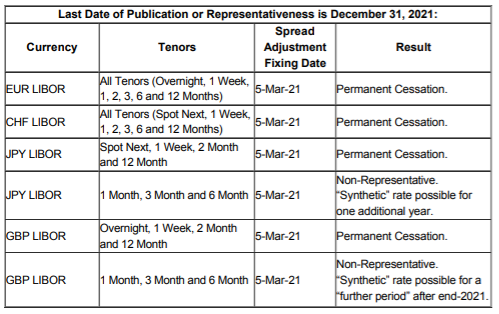 The IBA engaged multiple constituents, including market participants, panel banks, the FCA and others, regarding the potential for continuing certain widely used LIBOR settings after December 2021. In December 2020, following discussions with the FCA and others, the IBA published a consultation of its intention to cease publication of certain LIBOR settings by certain dates, subject to the rights FCA has to compel the IBA to continue publishing LIBOR. Respondents to the consultation had until late January 2021 to provide feedback to the IBA. The announcements were the result of that feedback it received.

Bullet 3: The March 5th announcements are a “Trigger Event” under the terms of your credit agreement – but do not require immediate transition.

Almost every credit agreement in the fund finance market for a LIBOR-based deal contains contractual fallback provisions recommended by the Alternative Reference Rates Committee (“ARRC”) with respect to USD LIBOR.

The impact of this “trigger” event on your loan agreement depends on whether the credit agreement uses the hardwired approach or the amendment approach. For credit agreements that include the ARRC hardwired fallback language (which is the current recommended approach), the occurrence of this trigger event (called a “Benchmark Transition Event” in the drafting) does not mean anything changes other than potentially a notice requirement from the lender in a bilateral deal or the agent in a syndicated deal to the borrower. The actual transition will occur when LIBOR actually ceases or the FCA declares it non-representative at the end of June 2023 (this will be the “Benchmark Replacement Date” in your credit agreement).

If your credit agreement contains the ARRC or another variation of the amendment fallback language, the occurrence of a trigger event may require notice of the event from the lender in a bilateral deal or the agent in a syndicated deal to the borrower, and this notice would allow an amendment process to begin. In the case of the ARRC language, the effective date of such an amendment would not occur until the 90-day window (or another number of days agreed by the parties) begins starting on April 1, 2023, leading up to the cessation date in June 2023.

Note that under either approach the drafting in the credit agreement typically contemplates an “Early Opt-In” concept which allows the parties to elect an earlier transition.

Both forms of the ARRC fallback language contemplate a spread adjustment to account for the economic difference between LIBOR and the risk-free rates. The ISDA Spread Adjustments published by Bloomberg were also set on March 5, 2021, giving market participants economic certainty for the transition. ARRC has said that it will match ISDA’s spread adjustment values for products such as business loan agreements.

Bullet 5: “Synthetic” LIBOR could really be a “thing.”

The IBA and FCA each noted in their announcements that if the UK Benchmark Regulation is amended in accordance with proposed amendments, the FCA would have the power to require the IBA to continue publishing certain LIBOR settings for certain limited purposes on a “synthetic” basis. The FCA has made clear that these synthetic LIBOR settings will no longer be deemed “representative of the underlying market and economic reality the setting is intended to measure.” It would also be calculated using a different methodology.

The proposed powers are intended to be of limited use, intended to assist parties to “tough legacy” contracts that do not have appropriate LIBOR alternatives and cannot practically be amended. The table below sets out the LIBOR settings that FCA may require IBA to publish on a synthetic basis. The FCA has indicated that it does not intend to use its proposed expanded powers to require the IBA to continue publishing any other LIBOR setting beyond the intended cessation dates.

Bonus Bullets: What else happened in March?

The events of March 5th allowed for this simplified language because the existing ARRC language contemplates multiple trigger events for replacement of USD LIBOR. The March 5th announcements are seen as that event, so the language can be streamlined there. The spread adjustment was also set on March 5th, which simplifies the drafting.