The structuring options include a Common Contractual Fund (CCF), an Irish Collective Assetmanagement Vehicle (ICAV), a Variable Capital Company (VCC), a Unit Trust and an Investment Limited Partnership (ILP). This series takes a look at each of these options.

What is a CCF?

A `common contractual fund' is defined in the European Communities (Undertakings for Collective Investment in Transferable Securities) Regulations 2011 (UCITS Regulations) as a `collective investment undertaking being an unincorporated body established by a management company under which the participants by contractual arrangement participate and share in the property of the collective investment undertaking as co-owners'.

Many multi-national pension schemes seek to achieve economies of scale and efficiency of operation by pooling pension fund assets into one entity. For such pooling to successfully take place it is imperative that the pooling vehicle is tax transparent (i.e. that the income and gains of such vehicle are treated as arising or occurring to the investors and not to the vehicle itself) in order to ensure that the tax status of the pension schemes is not prejudiced and that the efficiencies of a pooling vehicle are not negatived by detrimental tax treatment. CCFs are, under Irish law, tax transparent vehicles which may be established for such purpose.

CCFs are also used for asset pooling where investors are not pension funds but are institutions or other structures pooling their assets into a single fund vehicle.

How is a CCF created?

A CCF is formed by a contractual deed between the manager and the depositary whereby investors participate and share the property of the fund as co-owners of the assets of the fund. Each investor holds an undivided co-ownership interest as a tenant in common with the other investors. The deed of constitution may be drafted to provide that income is distributed on an annual basis so as not to prejudice the tax transparency of the vehicle in certain jurisdictions. The depositary will be a party to the deed of constitution to specifically acknowledge its terms and the obligations at law of a depositary. The depositary is not a trustee and its obligations will be more precisely defined in a separate depositary agreement.

CCFs are tax transparent, meaning that income and gains are treated as accruing directly to each investor, as if the income or gains had never passed through the fund. On that basis, double taxation treaty reliefs between the investor's home jurisdiction and the jurisdiction in which the underlying investments are based should be available.

How is a CCF structured?

The CCF is an unincorporated body established by a management company under a contractual deed whereby the investors participate as co-owners of the assets of the fund. Its characteristics are closely aligned to that of a unit Trust. The CCF is available to institutional investors only.

The CCF is an unincorporated entity without a separate legal personality. It cannot assume liabilities so the manager and the depositary contract on its behalf. 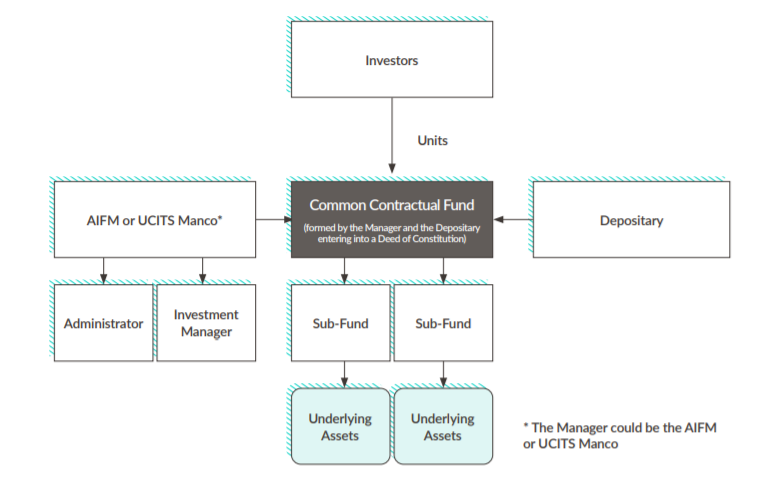 A CCF may be established as a UCITS (in which case it must be open-ended). UCITS are subject to the UCITS regime (which includes the Central Bank of Ireland's UCITS Regulations) and the provisions of the Investment Funds, Companies and Miscellaneous Provisions Act, 2005.

A Retail Investor AIF (RIAIF) which may be marketed to retail investors.

Both RIAIFs and QIAIFs are subject to the AIFMD regime (which includes the Central Bank of Ireland's AIF Rulebook) and the provisions of the Investment Funds, Companies and Miscellaneous Provisions Act, 2005.

CCFs must be open ended.

CCFs may be single fund structure or an umbrella fund with multiple sub-funds and with segregated liability between sub-funds.

What do investors hold?

Participants (otherwise known as unitholders) in CCFs hold co-ownership rights in the property and assets of the CCF represented by units. The liability of unitholders shall be limited to the amount contributed or agreed to be contributed for units.

The income and gains of a CCF are treated as accruing directly to the investors. Therefore, there is no exposure to Irish tax for investors who are otherwise outside the scope of Irish tax. A CCF is tax transparent under Irish law so as to facilitate the CCF investor in obtaining relief under the terms of a double tax treaty between their home jurisdiction and the jurisdiction where the withholding is suffered, effectively ignoring the existence of the CCF.