The Draft Ruling has been updated to account for key technological changes that have taken place within the software industry over the last three decades, and includes examples covering packaged software by way of physical media, digital downloaded software, and cloud based software-as-a-service (SAAS).

The Draft Ruling focuses on three key activities (software licensing, software distribution, and software services). The conclusions reached in the Draft Ruling are summarised in the table below. 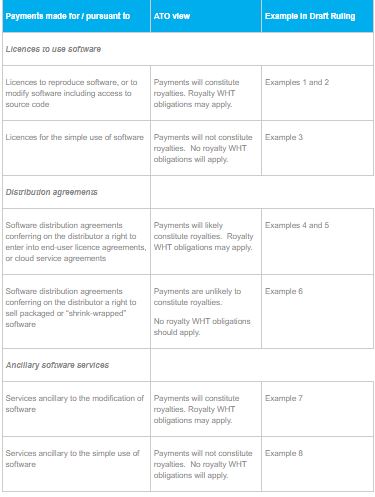 Of particular note is the increased interaction between copyright law and taxation law in determining whether a “royalty” arises.

The release of the Draft Ruling is welcome in that it provides the ATO guidance on a range of different software arrangements that are more closely aligned with what is currently seen in the market, as opposed to the types of arrangements formerly addressed in TR 93/12. For example, the Draft Ruling addresses digital and SAAS methods of distribution.

The Draft Ruling was issued on the basis that interested parties can comment and make submissions, however only a short period is allowed for the making of the submissions. We understand that some industry consultation was undertaken by the ATO prior to the release of the Draft Ruling.

Once the final ruling is issued, the ATO has proposed that it will apply both before and after the date of issue.

Impacted businesses should review the Draft Ruling to determine whether both historical and future positions taken regarding royalty WHT are consistent with the ATO’s position, or whether there are refinements that could be made to these arrangements to support the position adopted. This may include businesses that distribute software through cloud services, or where parties to a licensing agreement have provided for a software or source code escrow arrangement.

The Draft Ruling places greater emphasis on the technical aspects of Australian copyright law and its interaction with Australian tax law. The ATO considers an amount to be a royalty to the extent that it is consideration for the grant of a right to do something that is the exclusive right of the copyright owner. By reference to the Copyright Act, the ATO considers that in respect of software (a literary work), these rights will relevantly include the right to reproduce the work in a material form; the right to make an adaptation of the work; and the right to communicate the work to the public.

“Simple use” of software is defined as the process of using software for the purpose for which it was designed or intended to be used. In these circumstances, any use of copyright necessary to facilitate the use of software as a functional product, is merely incidental and therefore associated payments are not royalties.

Examples 4 and 5 consider software distribution agreements which confer upon the distributor the right to enter into agreements with customers or end-users. In a departure from the previous TR 93/12, the ATO now takes the view that despite customers or end-users ultimately receiving a license for simple use only, a distinction should now be drawn between transactions where the software is acquired pursuant to a sub-licensing arrangement, and transactions where the software is acquired by the customers/end-users directly. In the former situation, the payments made from distributor to copyright owner for the right to distribute software by way of sub-licensing will constitute a royalty.

In contrast, Example 6 deals with the distribution of shrink-wrapped software. In this case, because these distributions do not relevantly entail the use of copyright by the distributor the associated payments will not be treated as a royalty.