On April 30, 2021, Sepblac published data on the activities carried out in 2020, in the exercise of its powers as the Financial Intelligence Unit (FIU), as supervisory authority and as the body entrusted with maintaining the Centralized Banking Account Register.

From this information, it is worth noting, within its supervisory work, that fewer inspections had been conducted in the year (a 10% drop), but there were more inspections on real estate regulated entities, law firms and tax and accounting advisors. As part of its FIU work, it handled significantly more suspicious transactions reports (with banks filing the bulk of these reports), as well as requests for information exchanged with foreign national authorities.

In 2020, Sepblac carried out 13 inspections on real estate companies, 10 inspections on law firms, and conducted 10 more inspections on audit and accounting firms and tax advisors. These figures were considerably higher than the ones of the previous year, reflecting a closer monitoring of anti-money laundering and counter-terrorist financing (AML/CFT) compliance by these operators by the regulatory body. The greater scrutiny placed on this group of obliged entities meant that fewer inspections were conducted on payment entities (87 inspections in the previous two years). 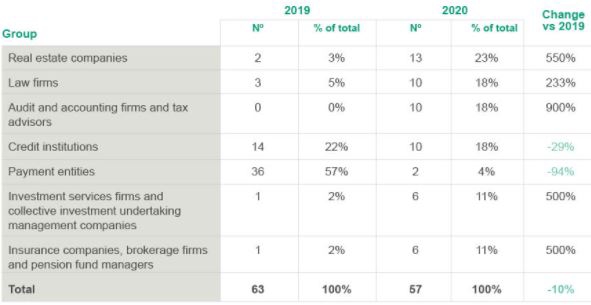 One such specific action was the questionnaire sent to credit institutions in July 2020, with nearly 190 entities responding.

Suspicious transaction reports sent to Sepblac increased by 70.49% over 2019

A total of 12,401 transactions were reported as suspicious, reflecting a year-on-year increase of 70%. The bulk of these reports (12,100) were made by obliged entities themselves. This evidences the important effort undertaken by these operators to comply with the provisions of the Law 10/2010, of April 28 on the prevention of money laundering and terrorism financing, and its implementing regulations.

By segments, the reports of suspicious transactions of financial-sector obliged entities were once again the more numerous: 10,550. Within these, banks were responsible for 7,293 reports. This represents an increase of 54% with respect to 2019 and consolidates a growing trend seen in recent years.

Among non-financial sector obliged entities, notaries and registrars once again made the highest number of reports (962), cementing their key role in preventing money laundering and terrorist financing. Lawyers made 36% more reports in the year to reach 30, but were outpaced by auditors, accountants and/or tax advisors, reaching 33 reports (up 230% in the year).

The majority of suspicious transaction reports were made to central government law enforcement agencies: 4,569 to the National Police and 3,755 to the Civil Guard. In a somewhat distant second place were those made to bodies reporting to the Spanish Tax Agency (AEAT), such as the National Anti-Fraud Office (ONIF) and the Customs Department (total of 1,781).

Mandatory reports on the creation of financial institutions decreased 40% over the past year, from 203 in 2019 to only 122 in 2020. Among them, 64% relate to the creation of institutions supervised by the Bank of Spain, and 35% to securities institutions. The slowdown was somewhat less acute for mandatory reports on structural modifications (down 33%, to 14). All this highlights the deceleration in the corporate activity of obliged entities in 2020, most likely due to the pandemic.