On June 24, the U.S. government imposed sanctions against the leader of the U.S.-Mexico border of Iran, Ayatollah Ali Khamenei, and against eight Iranian military commanders. The news came as an alternative to the original retaliation to be carried out by the U.S. following the downing of a U.S. drone in the vicinity of Iran last week. The sanctions, approved by an executive order from the White House, directly affect Iranian leaders: from freezing any assets belonging to those sanctioned to a general ban on facilitating significant operations in other countries' financial institutions. In addition to this battery of sanctions, there is the total ban on the purchase of Iranian oil, decided in April, and the punishment in May of the industrial metals sector, which is the second largest source of export income after crude oil.

The recent news highlights the dynamism and constant changes in international sanctions. Other recent cases are the lifting of sanctions imposed on the Maldives by the European Union, as reported by the Council when considering an improvement in the political situation and respect for human rights, and the lifting of sanctions by the UN on Eritrea. Imposed since 2009, these sanctions were lifted because no conclusive evidence was found that this government supports terrorist groups and the sanctions were seen to be strangling the region's economy, stagnating the economies of the Horn of Africa and further weakening the region. Following the UN, the EU also lifted its sanctions on Eritrea.

Restrictions on exports, the immediate objective of which is to limit the scope of the capacity for internal repression or external aggression of a State.

Restrictions on imports, the most frequent being the prohibition of acquiring certain goods and goods whose export is essential for the sanctioned country, insofar as they provide a significant part of its income.

Organisms that impose UN Sanctions: can act by imposing sanctions in case of threats to peace, infringement of the same or acts of aggression, in accordance with Chapter VII of the Charter of the United Nations. In Article 41 of the Charter of the United Nations, the UN establishes that the Council of Security may decide on measures which do not involve the use of force and points out that these measures may include the total or partial interruption of economic relations and means of communication. The obligation to fully implement the compulsory measures approved by the Council of Security is the responsibility of the Member States of the United Nations. Thus, really, the sanctions are implemented through legislative, administrative and judicial action of States and other international entities, such as the European Union.

EU sanctions: the procedure for their application adoption begins at the proposal of the high EU representative for Foreign Affairs, and Security Policy. The EU often imposes several of the following types of restrictions: related with armament and repression, export of goods, export of computer equipment, travel restrictions, financial sanctions and the consistent rejection of claims and other types of claims in EU countries. EU sanctions are applied by the authorities of the Member States which, in each of them has competence through the adoption and implementation of the corresponding national measures.

Sanctions of the United States of America: The North American system responds to the particularities of its conception of the separation of powers and also of its peculiar administration. There are a number of laws by which Congress delegates the power to impose embargoes to the President, for example: the International Emergency Economic Powers Act of 1977 or the Export Administration Act of 1979. 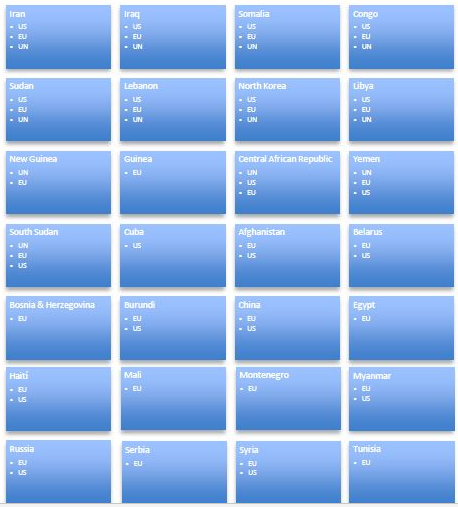 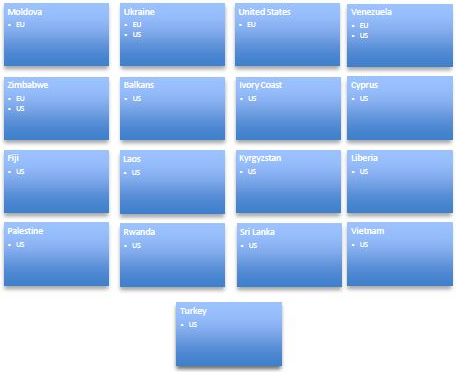 Currently, the best known is the Helms-Burton Act 1996, which allows former national landowners of the United States to claim compensation for damages and losses to those who "traffic" goods, properties and assets confiscated as of 1 January of 1959. For more information on the Helms-Burton Act click on the following link: https://bit.ly/2xqoHwO

Additionally, last 13th June, the Office of the Controller of the Foreign Assets (OFAC) of the United States announced that there were closed agreements with three travel companies (Expedia Group, Hotelbeds USA and Cubasphere) for the payment of fines for his alleged participation in the booking of trips to Cuba. These last cases demonstrate the importance of compliance programs with respect to sanctions.