In December 2019, the Ministry of Interior publicly announced timeline extensions to the Land and Building Tax Act (the "Act"), in order to give relevant authorities more time to collect data and make accurate tax assessments. The key extension is to extend the tax payment deadline from April 2020 to August 2020.

The government has also postponed other key parts of the Act's timeline, which are summarized below. 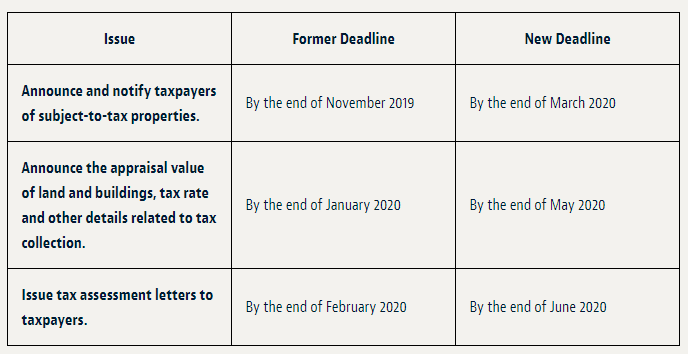 2) Ministerial regulation regarding installment payments of the land and building tax.

These recently-announced regulations set out clear examples on how vacant properties are defined and installment payments can be made. More details are provided below.

According to the Act, one of the four property categories subject to the land and building tax covers land or a building that is either: (i) left vacant; or (ii) not properly used or reasonably used ("Vacant Property").

The ministerial regulation regarding the definition of Vacant Property further explains that land is considered Vacant Property if it meets either of the following criteria:

A building is considered Vacant Property if it meets either of the following criteria:

The ministerial regulation regarding the definitions of Vacant Property also makes clear that the following are not classified as Vacant Property for the purpose of the Act:

1) land that is being prepared for use;

2) buildings that are under construction;

3) land or buildings that a law or court order has forbidden from being used; and

4) land or buildings that are under a court's review for contentious matters involving legal title or possessory rights.

Only a taxpayer who has at least Baht 3,000 of tax due will be eligible to pay in installments. A permitted taxpayer who desires to settle the land and building tax in installments must submit a request letter to the local sub-district administrative organization (SAO) by April each year. Installment payments must be paid in three equal rounds, in April, May and June. However, for fiscal year 2020, due to the extended deadlines, submit the request letter by August 2020 and make the installment payments in August, September and October 2020.

According to the Act, failure to settle the tax within the timeline will be considered default; a defaulting taxpayer is required to pay all outstanding tax to the authorities with an applicable surcharge at 1 percent of tax arrears per month or fraction thereof.