In August, the Korean Supreme Court decided on case 2018Hu10848, an appeal from the Patent Court in a trial to confirm the scope of trademark rights. The ruling confirmed the scope of comparison permitted in such a trial, and may be interesting to anybody not familiar with such a subject matter.

What is a trial to confirm the scope of rights, and what purpose does it serve?

The Korean Trademark Act provides for a trademark right holder, exclusive licensee or interested party to request a trial to confirm the scope of rights in a registered trademark (hereafter “scope confirmation trial”). This is an inter-partes administrative trial used to determine whether the use of a specific mark on specific goods falls under the scope of — and would thus potentially infringe — a registered trademark. Scope confirmation trials are heard at first instance by the IP Trial & Appeal Board (“IPTAB”), an administrative tribunal organized under the Korean IP Office. The initial IPTAB decision can be appealed to the Patent Court, and subsequently to the Supreme Court.

In the case that the mark for comparison includes any portion against which trademark rights would not have effect, the comparison with the registered trademark should be made on the basis of whether the mark excluding such portion(s) would cause confusion as to the origin of the goods. Portions which would be excluded are those prescribed under Article 90 of the Trademark Act, for example the bona fide use of a personal name, common name/quality/shape etc. of the relevant goods, well-known geographical place names, etc.

An unregistered mark which comes under Article 99 of the Trademark Act (relating to the right of continuous use of an unregistered mark based on fair prior use, where the mark had a source-indicating function at the time the registered trademark was applied for) may not be subject to a scope confirmation trial.

Registered trademarks are assumed to be valid if used on their designated goods. Accordingly, the subject matter for comparison in a positive scope confirmation trial may not be another registered trademark which is used on its designated goods — in such a situation, the claim would be that the mark was incorrectly registered, and an invalidation trial would be a more suitable action.

Party A applied for the “

” marks also covering class 3 goods, but the applications were finally refused based on prior mark citations, including Party A’s mark. Party B appealed the refusal decisions to the IPTAB and shortly afterwards also filed a negative scope confirmation trial to compare a different version of their mark — “

” — with Party A’s prior registration in relation to “body soaps”.

”. In the decision, the IPTAB compared the marks in terms of the text portions, stating that “Saboo” and “sobia” are dissimilar overall, as well as the device portions, ruling that they were sufficiently different given the large number of similar flower devices registered in class 3, meaning that any similarity had to be judged within a very narrow range.

Party A appealed this decision to the Patent Court, and a decision to uphold the appeal and cancel the earlier IPTAB ruling was rendered in May 2018.

In its decision, the Patent Court considered the text portions of the two marks in detail, discussing the similar pronunciation and similarity in appearance (both 5 letters long; first and third letters identical), and also commenting that the device portions of the marks could intuitively be considered as similar. The decision went on to make a detailed comparison of the packaging styles being utilized by both parties at the time (product wrapped with a black-edged green band with three rows of type in white capital letters, etc.), and also explained the history of the business relationship and conflict between the parties. 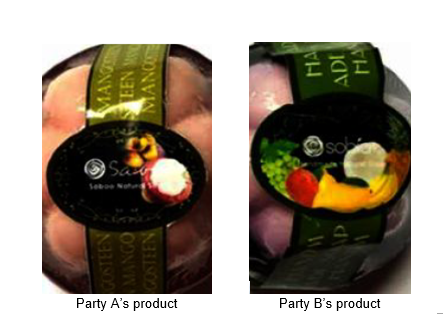 Party B appealed the decision to the Supreme Court in May 2018.

On August 14, 2019, the Supreme Court decision was rendered, overturning the earlier ruling and remanding the case to the Patent Court for reconsideration.

In its decision, the Supreme Court affirmed that when judging similarity in a scope confirmation trial, if there is actual use on the goods it is proper to give general and broad consideration to matters relevant to commerce (such as the degree to which a mark is well-known and its relation to the goods, as well as consumer recognition), but ruled that the Patent Court had erred in giving excessive weight to features which are commonly subject to change in commerce — in this case specifically, the detailed shape or form of the goods and their packaging — overlooking the differences in appearance and designation.

The decision reinforces the relatively limited scope of comparison permitted in scope confirmation trials, stating that the Patent Court went too far in its comparison of specific characteristics of the actual goods and their packaging. A revised Patent Court decision reflecting the Supreme Court ruling can now be expected in due course.