China has set a national target to achieve carbon peaking by 2030 and carbon neutrality by 2060, prompting an active push by the country's mining sector to pursue industry transition and achieve a low-carbon production plan.

At the same time, a drive to ensure the continued supply of critical metals for the next stage of China's development continues unabated.

In March 2021, China rolled out its 14th Five-Year Plan (FYP) (2021–2025) for National Economic and Social Development and the Long-Range Objectives Through the Year 2035. The 14th FYP affirms the national targets of carbon peaking by 2030 and carbon neutralization by 2060, as announced by President Xi Jinping at a UN summit on climate change in December 2020.

To achieve the goal, the 14th FYP calls for greater development of clean energy including wind power, photovoltaic, hydropower and nuclear power, structural reform and elimination of outdated capacity in high-energy-consuming industries such as steel, petrochemical and chemical. The 14th FYP also asks key industries and key enterprises to take the lead in reaching carbon peaking.

“Green metals,” including copper, nickel, lithium, cobalt and rare earth metals, will be in high demand in China’s push to meet carbon-neutrality targets

In April 2021, the China Nonferrous Metals Industry Association (CNMIA) released a draft carbon peaking implementation plan for the nonferrous industry for comments. The plan targets 2025 for carbon peaking for the industry, five years earlier than the national target.

CNMIA anticipates the reduction from aluminum and steel-making sectors will underpin the meeting of the targets. The Aluminium Corporation of China (Chinalco), which is the second-largest alumina producer and third-largest aluminum producer globally, announced a plan to reduce carbon emissions by 40 percent by 2035 and reach peak emissions before 2025.

Baowu Steel, one of the world's largest steel producers, is aiming for carbon peaking in 2023 and carbon neutrality by 2050.

Across the mining sector, energy structure optimization through increasing the usage of renewable energy is a growing trend. According to Chinalco, approximately 50 percent of its total electrolytic aluminum products in 2020 were already produced with green energy.

Chinalco is also intensifying an effort to shut down aged production lines and reduce pollutant emission and waste disposal across its plants in China, having achieved an annual decrease of 10.92 percent and 67.06 percent respectively in terms of sulphur dioxide and nitrogen oxide emissions.

As part of the overall effort in meeting the national target and rebalancing the economy from the impact of COVID-19, in the first five months of 2021, China raised green bonds with a total value of US$26.1 billion to support clean and renewable energy projects. This was more than double the value of the same period in 2020, according to financial data provider Refinitiv.

Chinese miners are taking full advantage. In April, Zijin Mining Group issued the first carbon neutralization bond among China's precious metal miners and pledged to use the US$46 million in proceeds on photovoltaic power facilities.

Increasing the recycling and utilization of scrap metal is another key focus. According to CNMIA, China has consumed 700 million tons of non-ferrous metal since the 1950s, and metal scrapping has now entered a peak period.

It is widely expected that the aluminum smelting and steel sectors will be included in the national carbon emissions trading scheme (ETS) in the 14th FYP period, further improving the implementation and tracking of the emission reduction efforts in these sectors.

The Chinese ETS was officially rolled out in July 2021 and currently targets power generation as the "breakthrough sector". According to the Ministry of Ecology and Environment, the power plants admitted in the scheme emit more than 40 billion tons of carbon dioxide in aggregate, making the Chinese ETS the largest carbon-trading market in the world by volume. 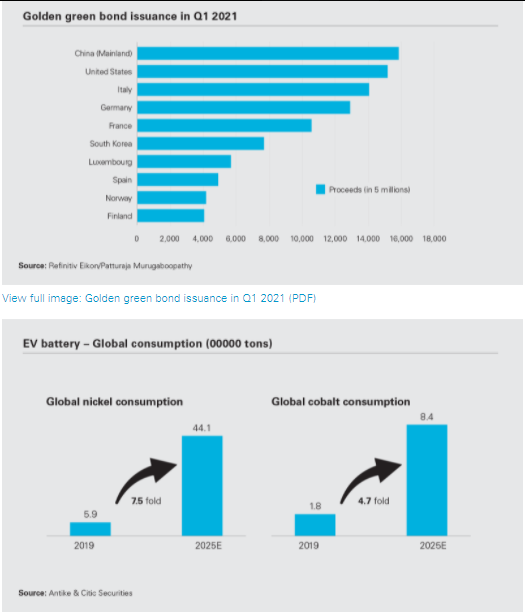 ​​​China raised green bonds with a total value of US$26.1 billion in the first five months of 2021 to support clean and renewable energy projects​​​

In October 2020, China's State Council published a development plan for the new energy vehicle industry (2021–2035), targeting a 20 percent market share for new energy vehicles by 2025, and for electric vehicles to account for the majority of new sales by 2035.

As with the trend globally, "green metals," including copper, nickel, lithium, cobalt and rare earth metals, will be in high demand in China's push to meet carbon-neutrality targets and the rapid development in sectors such as new energy vehicle, photovoltaics and wind power.

Other than rare earth, China's demand for imports of other critical metals in the next decade remains high and will be increasingly met by production in the countries that Chinese mining companies invest in, particularly those that are part of the "Belt and Road" infrastructure development strategy. 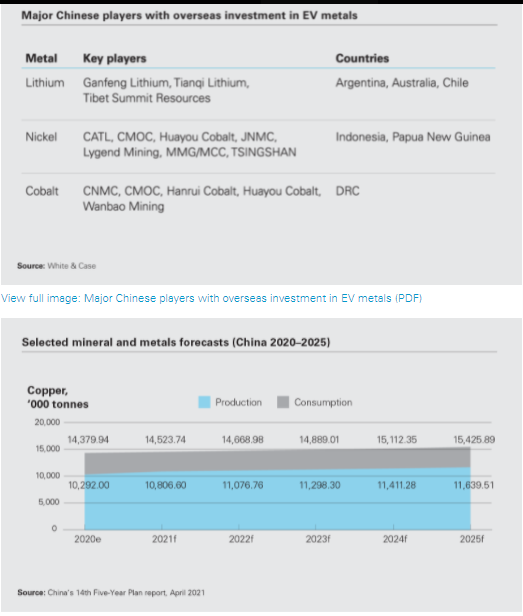 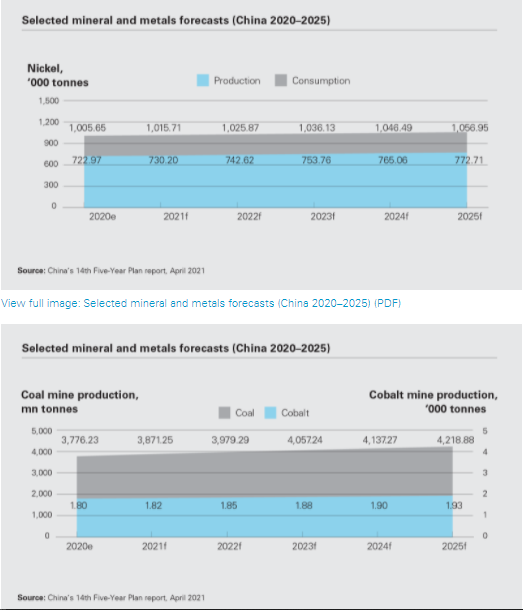 At a time when low carbon is the codeword for sustainable mining practice and green metals are in high demand, the new generation of Chinese miners are making an effort to stay ahead of the curve.

In May 2021, the world-class Kamoa-Kakula copper mine in the DRC achieved the first production with the backing of Chinese and Canadian shareholders including Zijin Mining, Ivanhoe Mines and Citic Metals. Kamoa-Kakula will be the second-largest copper mine globally at its peak production (800,000 tons of copper metal-equivalent per year).

With the operation being powered by hydro-generated electricity and the proposed introduction of mining equipment supported by electric batteries, Kamoa-Kakula is expected to be one of the lowest-carbon emitters among the top-tier copper mines in the world.

Also in May, Lygend Mining began the trial operation of its OBI integrated nickel operation in Indonesia—with a nameplate capacity of 60,000 tons of nickel metal-equivalent. The operation uses the high-pressure acid leaching technology (HPAL) that was first applied by a Chinese company at Ramu nickel mine in Papua New Guinea.

The Ramu mine has been in operation since 2012 and achieved the lowest greenhouse gas intensity compared to other global HPAL operations and nickel laeterite refining operations, according to the results from a recent third-party certification.

As another testament to Chinese companies' growth ambitions, CMOC recently announced the expansion of the Tenke Fungurume copper and cobalt mine in the Democratic Republic of the Congo, which, coupled with the development of the adjacent Kisanfu cobalt asset, would significantly increase its cobalt output and potentially make CMOC the biggest cobalt producer globally.

These moves by some of the biggest players in the Chinese metals market could prove crucial to China's aims of achieving carbon neutrality, and send a strong message to the wider global industry about what can be done in this sector to cut emissions.