Connected and autonomous vehicles: a guide to road testing rules in China

In this e-bulletin, we compare the key features of the various major municipal and national road testing rules issued to date.

The Shanghai government was the first to follow Beijing’s lead with its issue of the Administrative Measures on Road Testing for Intelligent Connected Vehicles (ICV) on 22 February 2018 (Shanghai Rules). Although Shanghai lost to Beijing in the battle to be the first city in China to publish road testing rules for autonomous vehicles, it was the first to issue test permits. On 1 March 2018, the Shanghai government issued three test permits to SAIC Motor and NIO, both Shanghai-based car manufacturers and later another two permits to BMW on 14 May 2018, which becomes the first foreign-invested company to obtain testing permit. Beijing was quick to follow suit and granted its first five test permits to Baidu on 22 March 2018 and later one permit to NIO and BAIC each on 25 April 2018.

Changchun, where First Automobile Works (FAW) is based, became the latest city to publish road testing rules (Changchun Rules) on 16 April 2018, and later awarded its first batch of test permits to FAW. Even Changsha, the provincial capital of Hunan, issued road testing rules on 13 April 2018.

I. Scope of testing vehicles

i. Level of automation

According to the Guidelines on Standards for Connected Vehicles Industry (Standards Guidelines) proposed in China, autonomous vehicles are divided into two categories, namely “assisted control” and “automated control” and consist of five levels of automation. Given the way testing vehicles are defined in the various road testing rules, only vehicles in three levels of the automated control category are subject to road testing rules. China has yet to officially define each level in its national standards guidelines for autonomous vehicles, but according to the previous draft of the Standards Guidelines, the automated control category is equivalent to driving automation level 3 and above as defined by the Society of Automotive Engineers, namely: conditional automation (level 3), high automation (level 4) and full automation (level 5).

Currently, the National Rules and the Shanghai Rules only permit passenger vehicles and commercial vehicles to be tested, and exclude low-speed vehicles and motorcycles. However, the Beijing Rules and the Chongqing Rules permit road testing for all vehicles meeting the GB7258 safety standards for vehicle operation.

It is now clear that the MIIT, MPS and MOT and their local counterparts (Administrative Authorities) will be responsible for regulating road testing for autonomous vehicles across China.

The functions of the Authorized Institution include:

(i) accepting and reviewing applications filed by applicants (Testing Entities) for road testing of autonomous vehicles;

The following Authorised Institutions have been appointed: 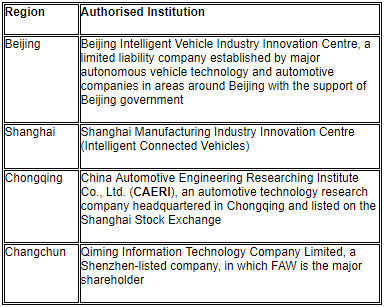 The other cities are yet to announce which Authorized Institution will be appointed.

The various road testing rules set out a series of safety measures to ensure that road tests can be conducted safely. These measures include:

(i) report the incident to the Authorized Institution within 24 hours, together with data recorded at the time of the accident (save that under the National Rules and the Changchun Rules, data is only required for serious accidents); and

(ii) submit a formal report on the accident to the Authorized Institution within a certain period covering the liability, causes and analysis of the accident.

The Authorized Institution may suspend road testing of the test vehicle involved in an accident. Under the Beijing Rules and the Chongqing Rules, following serious accidents, road testing of all autonomous vehicles of a Testing Entity must be suspended. The Testing Entity must apply to the Authorized Institution to restore its testing qualification.

Under the various road testing rules (except the Chongqing Rules), the Testing Entity must be an independent body corporate registered within the territory of China. A foreign company wishing to test autonomous vehicles in China must, therefore, do so via a Chinese subsidiary or a Chinese partner.

I. A consistent legal framework with nuances

As we anticipated in our previous e-bulletin, the recent road testing rules have followed the framework established by the Beijing Rules with certain nuances. Interestingly, the National Rules are substantially more similar to the Shanghai Rules, which were published earlier than the National Rules, in their form and contents, and notably both use the term intelligent and connected vehicles.

Another open question is whether each city will recognize the test results obtained by Testing Entities in other cities. So far, the National Rules are silent on this issue.

While the various road testing rules follow a similar regulatory framework, the nuances between the rules and the approaches taken by the local governments could significantly influence the choice of testing locations in China. Testing Entities should pay particular attention to the following points:

(i) Scope of vehicles

So far, only Chongqing does not require the Testing Entity to be incorporated in China. A foreign investor that does not wish to incorporate a company in China should consider Chongqing as their first choice of testing location, although it remains to be seen whether in practice Chongqing will grant a license to a foreign company without a local presence. In addition, Pingtan, which is located close to Taiwan, allows body corporate registered in Taiwan to conduct road testing,

The Authorized Institutions appointed in Beijing and Changchun are companies controlled or partly owned by local car manufactures or autonomous driving technology developers and, perhaps unsurprisingly, the first batch of permits have been issued to local companies.

Testing Entities should also consider whether the testing subjects and the relevant facilities and road conditions will meet their test purposes. In particular, given the requirements for closed-area testing, Testing Entities should be familiar with the regional testing subjects and standards for closed-area testing to ensure that their autonomous vehicles can pass the tests.

Moreover, the test roads in each city are also different in terms of the geographic conditions and testing scenarios and facilities (for example the availability of ‘V2X’ facilities), which may or may not meet the test purposes of the Testing Entities and could create difficulties for certain test vehicles. For instance, testing roads in Chongqing are likely to be hilly and may contain more complex road conditions, whilst Beijing has the longest testing roads (105 km in total) so far.

The recent municipal and national road testing rules have laid the foundation for Testing Entities to test their autonomous driving systems in China. We expect to see intensive testing activities in major cities in China in the coming months and more test permits being granted. In choosing the right location for road testing, Testing Entities should ensure they are aware of the applicable regulatory regime, the nuances of the relevant road testing rules and the approach taken by local governments and Authorized Institutions in implementing those rules. The regulatory landscape in China is still developing and requires carefully navigation if companies are to be able to successfully test their vehicles.