The NSW Government has unveiled plans to implement ratings systems for professionals in the building industry and new powers enabling the NSW Building Commissioner to prevent occupation certificates from being issued on suspect developments.

Intended to improve transparency, accountability and quality of work within the NSW building industry, the Six Reform Pillars are the first publicly-released outline of the NSW Building Commissioner's work plan to overhaul the State's building and construction industry. However, before they can be formally introduced, the Six Reform Pillars require NSW Parliament to pass the Design and Building Practitioners Bill.

The Six Pillar Reforms are specifically targeted to prevent repeats of the Opal and Mascot towers cracking controversies but have been criticised by NSW Labor and Green for being "too soft".

Combined with the Design and Building Practitioners Bill (currently before the NSW Upper House), the Six Reform Pillars form part of the NSW Government's response to the Shergold-Weir Report released in April 2018. The Shergold-Weir Report considered the effectiveness of compliance and enforcement systems for the building and construction industry across Australia and provided 24 recommendations to improve the national best practice model for effectively implementing building regulation and the National Construction Code. 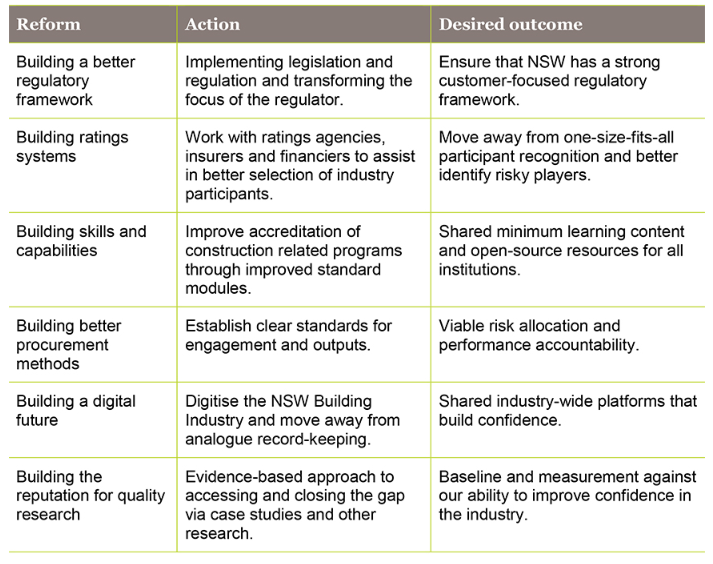 The core of the Six Reform Pillars features a new system under which builders, developers, engineers, designers and certifiers are rated and awarded an overall score based on a range of metrics, such as:

Among the other planned measures is a focus on improving skills within the industry by raising the accreditation of construction-related programs and an end to analogue record-keeping within three years, digitising and expanding access through industry-wide digitised platforms.

Builders would also be required to produce a digitised set of as-built drawings at the conclusion of every project before an occupation certificate may be issued. Building Commission staff will conduct audits and review the drawings, which will also be available to building strata committees.

Ensuring you can comply with the new building and construction laws

The NSW Government is aiming to revive public faith in the building and construction industry by significantly overhauling the regulatory framework and increasing enforcement powers to increase compliance across the industry. Builders, developers and certifiers unwilling to adapt to the proposed reforms risk being left behind.