Supplemental Examination is a tool created by the America Invents Act (“AIA”) that, according to the legislative history, was designed to give patent owners the ability to request that the USPTO review information that might later provide a basis for an inequitable conduct allegation if left unaddressed. Under 35 U.S.C. § 257, a patent owner may request Supplemental Examination of a patent to consider, reconsider, or correct information believed to be relevant to the patent.

The USPTO determines whether the information presented by the patent owner raises a substantial new question of patentability. If so, the USPTO orders ex parte reexamination.

Those items of information considered by the USPTO during Supplemental Examination are, according to the statute, removed as a basis for a later finding of inequitable conduct. Such considerations may also be relevant to separate inquiries under the equitable doctrine of unclean hands.

The patent owner requested Supplemental Examination only to review the patentability of crystalline form claims 6-14, in view of documents submitted by the applicant during prosecution and an expert declaration that was newly presented in the request for Supplemental Examination. The declaration discussed the relevance of the prosecution documents (a response to a restriction requirement and select pages of the as-filed application) to the issued crystalline form claims.

In this complex case, the expert declaration posited that the x-ray powder diffraction pattern peaks recited in crystalline form claims 6-14 did not correspond to the 5-membered ring compounds named in those claims, but rather to the 6-membered ring compounds taught in the examples in the application. Stated otherwise, in claims 6-14, each crystalline form recited a 5-membered ring, but, according to the declaration, what was disclosed in the specification and by the peaks recited in the claims was a 6-membered ring. Millennium filed the Supplemental Examination request asserting that the data discrepancies “may render the claims unclear, raising a potential indefiniteness issue[]” and may also create a potential issue of written description support. (Supp. Exam Request).

The USPTO found that a substantial new question of patentability (SNQ) had been raised and ordered ex parte reexamination of claims 6-14 of the ’504 patent. In particular, the Office noted that crystalline form claims 6-14 of the ’504 patent were first presented as newly added claims during the original prosecution in the response to the restriction requirement and were entered without the applicant offering support in the specification.

Because the expert declaration explained that the peaks recited in claims 6-14 corresponded to a 6-membered ring crystalline form but not the 5-membered ring named in those claims, the Office concluded that “[t]here is a substantial likelihood that a reasonable examiner would consider these teachings [i.e., the expert declaration and the parts of the specification it relied on] important in deciding whether claims 6-14 were patentable.” (Reasons for SNQ).

With respect to the problems highlighted in the expert declaration, claim 3 seemed to be particularly significant as it recited a structure having a 6-membered ring (see box below), which structure was not amended during the reexamination. Claim 3 did not contain any XRPD peaks. The only substantive amendment to claim 3, during the reexamination, was to delete a possibility for the variable P: 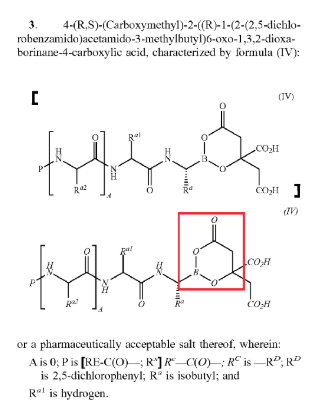 As noted above, the patent owner also amended claims 1 and 15. Claim 1, which covers both 5- and 6- membered rings (n can be 0 or 1), was amended for clarity to correct Rc and Ra1: 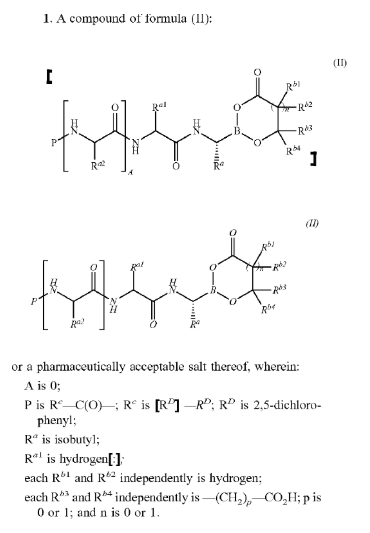 Claim 15 was also amended for clarity:

As a result of the reexamination, the Office deemed claims 1, 3, and 15 patentable as amended, confirmed the patentability of claims 2 and 4-5, and canceled claims 6-14. Thus, we see that the Office dealt with a very interesting procedural point. As noted above, although claims 1-5 and 15 were not included in the supplemental examination request (the request only included crystalline form claims 6-14), the patent owner, in response to a rejection in the reexamination, amended claims 1, 3, and 15.

The Office noted in Reexamination Reasons for Patentability/Confirmation that MPEP 2816.01 provided authority to allow the Office to reexamine claims 1-5 and 15, despite not being the basis on which supplemental examination was requested:

The Office summarized as follows its conclusions in the ex parte Reexamination Certificate:

So, what lessons are to be learned? An obvious one is to try to avoid errors in the claims, either as originally filed or as introduced during prosecution. The best way we know to reduce the chance of error is to carefully analyze claim language, particularly in a complex matter like this, both when drafting the claims and when amending them during prosecution. But if errors are not discovered until after issuance, this case demonstrates that Supplemental Examination may provide a way to address such errors.

There is another interesting point to be taken from this case. As noted above, the patent owner sought the Request for Supplemental Examination only for crystalline form claims 6-14, which it then abandoned during the reexamination. All the remaining claims were reexamined, as noted by the Office, as authorized by the MPEP. This raises the question - are the claims that remain in the ’504 patent, i.e., claims 1, 3, and 15, as amended, as well as claims 2, and 4-5, insulated from a later finding of inequitable conduct based on the information submitted by the patent owner in its Request for Supplemental Examination?

That argument is supported by reliance on the clear language of the statute. In particular, 35 U.S.C. 257(a) and (c)(1), clearly and literally recite Supplemental Examination is “of a patent,” not of claims of a patent: 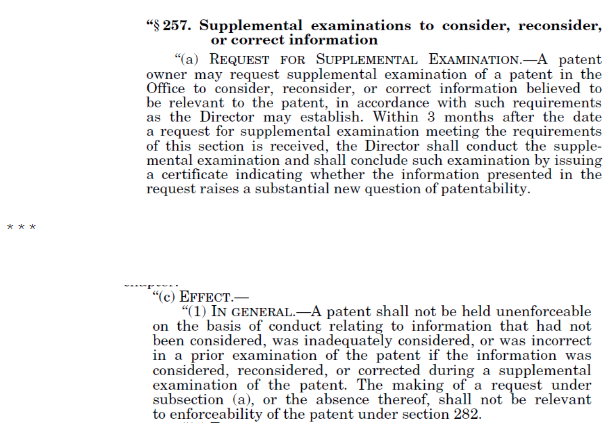 Use of Supplemental Examination is still in its infancy. Hence, the contours of the statutory provisions will no doubt be ironed out over time.