The PNP is aligned with the federal Express Entry system. Candidates that receive a provincial nomination automatically obtain an additional 600 CRS points. The program is designed for workers who have the skills, education and work experience to contribute to the economy of a specific province or territory. Each province and territory have their own “streams” which vary depending on the province’s needs.

The government is still on track to meet its ambitious target of welcoming over 400,000 newcomers throughout the year. Today's draw brought the total ITAs to 94,303. Almost doubling the numbers issued compared to this time last year which was 53,800 as of July 21st, 2020.

IRCC applied its tie-breaking rule with the timestamp of April 11, 2021, at 10:56:32 UTC. This means that Candidates who had the minimum score of 734 are only invited if they submitted their Express Entry profile before the tie-breaking rule. 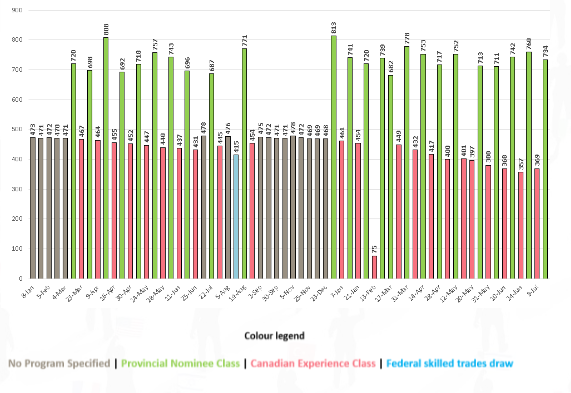