COP26: The future of financial services

What you need to know

This insight is divided into two parts. Part I summarizes climate finance reports that were delivered in connection with COP26. Part II describes what’s next with respect to climate finance in Canada.

To read more about COP26 and climate finance, please see our previous article.

Signed on November 14, 2021, the Pact charts a course to formalize new promises made throughout the conference. The parties regrettably acknowledge their failure to mobilize $100 billion (USD) per year by 2020. Further, an international carbon market was notably omitted from the Pact. Nonetheless, pledges were wide-ranging at COP26, and delegates will now return home to integrate these commitments domestically.

The parties welcomed the Biennial Report and its conclusions.1 This report notes that in 2018, private money accounted for 84 per cent of US$322 billion in new renewable energy investments, and mobilized private finance through multilateral, bilateral and regional means were US$14.6 billion. By comparison, the report estimates the following: 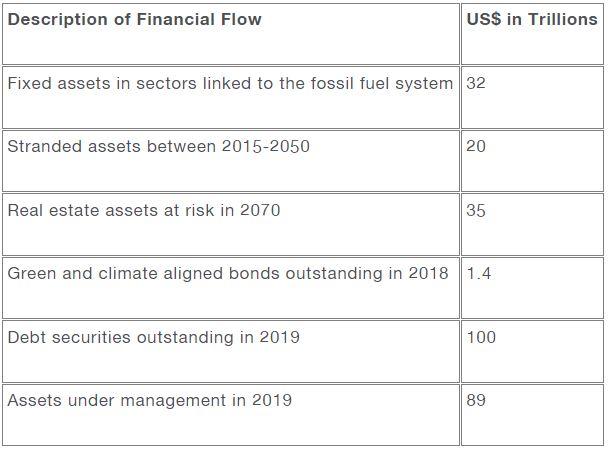 By some recent estimates, US$32 trillion of investment in decarbonization is needed this decade to put the world on a path towards net-zero.2

On “Finance Day”, GFANZ produced a progress report and a plan forward for the financial services sector. GFANZ unites the net-zero finance initiatives, which includes the NZBA into one sector-wide strategic alliance. The report allocates work streams in the financial sector (see table below) and discusses some tools for each work stream that are, or will be, available to various financial institutions. 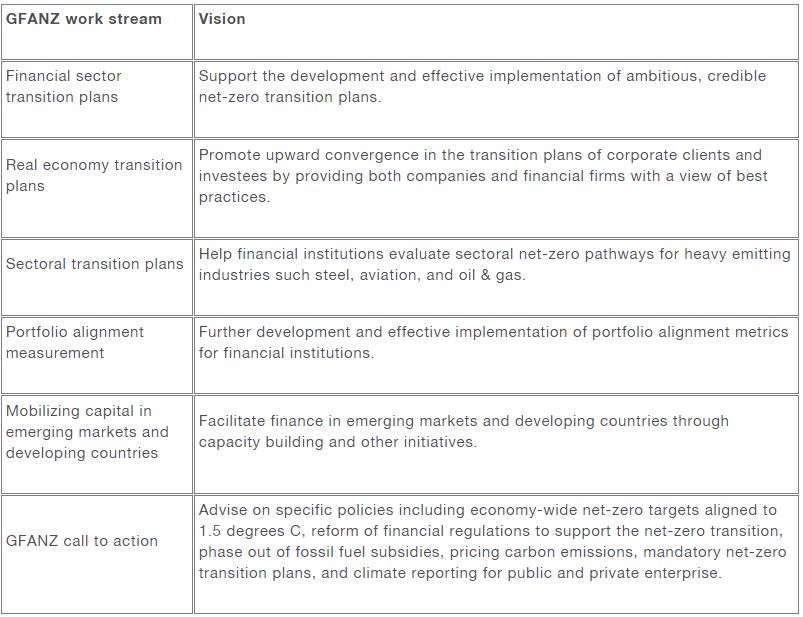 Specific action items and key challenges (such as insufficient coverage of climate considerations in a bank’s products and business lines) are shared within the report. With respect to bank clients, GFANZ will increase the ability of financial institutions to evaluate corporate net-zero transition plans and promote the reallocation of capital to decarbonization efforts.

Prior to COP26, several Canadian banks signed commitment letters to join the NZBA. Membership must publish a report that sets greenhouse gas emission (GHG) targets for 2030 and 2050. Targets will include their clients’ scope 1, scope 2 and scope 3 emissions for certain carbon-intensive sectors. Disclosure is expected to increase between each review period, which occurs every five years. Members will publicly disclose their targets and report progress annually, including an overview of the categories of actions expected to be undertaken to meet the targets and approximate timelines. The related guidelines operate on a comply-or-explain model whereby banks will justify any decision to exclude information about portfolio emissions. These reports will identify progress and areas of improvement for each member.

Part II: What to watch

Below outlines the developments in Canada’s financial services sector to follow in the interim. Policymakers, central banks and securities regulators are changing the regulatory landscape from the top-down, while the growth of new financial instruments are reshaping economic incentivizes from the bottom-up.

At COP26, the Federal Government reaffirmed existing obligations, such as continuing to lead the Climate Finance Delivery Plan, and delivered new pledges, such as ending new direct public support for the international unabated fossil fuel sector before 2023. Despite these pledges and others at COP26, parties of the UNFCCC are not expected to achieve their 1.5 Paris target.3 Now, Canada is expected to deliver, two years early, new nationally determined contributions in advance of COP27 in Egypt.

The Bank of Canada announced on Finance Day that climate risk assessments and the corresponding vulnerabilities would feature in future Monetary Policy Reports and annual Financial System Reviews. The Financial Stability Oversight Council (FSOC) made similar recommendations to its members to enhance public communication of climate-related efforts, including within annual reports and any relevant risk reports. FSOC will also form two new bodies: the Climate-related Financial Risk Committee and the Climate-related Financial Risk Advisory Committee, which will advise the former. New insights should help Canadian banks with their own transition plans.

In addition, the Bank of Canada announced that it will align its climate risk disclosure with the recommendations of the Task Force on Climate-related Financial Disclosures. Meanwhile, the Canadian Securities Administrators is seeking comments to the Proposed National Instrument 51-107 until January 17, 2022.4 See BLG’s bulletin of the essentials.

Banks that have signed up to the NZBA will release 2030 and 2050 targets within 18 months of joining. GFANZ wants commercial banks to realign their existing portfolios. Sustainability linked loans (SLLs) are becoming more common in the Canadian debt markets. Canadian banks and their clients are tying pricing to a wide range of climate-focused goals, such as GHG, in alignment with the Science-Based Target initiative, reduction in fresh water usage, green revenues and metrics linked to various Environmental, Social and Governance (ESG) indices. We expect this trend to continue as regulators switch from voluntary policies to mandatory requirements, particularly in the resource sectors.

Financial architecture in the future will align regulatory frameworks with climate reduction efforts. The Sustainable Finance Action Plan, formed from the Expert Panel on Sustainable Finance, is collaborating with Canada’s Net-Zero Advisory Board to develop best practices throughout the financial sector. On November 1, 2021, the Minister of Environment and Climate Change and the Minister of Natural Resources sought advice from the Net-Zero Advisory Body with respect to cutting emissions in the oil and gas sector. The advice will inform the Emissions Reduction Plan that the Federal Government plans to table in Parliament over the coming months.

GFANZ is calling on G20 countries to align debt issuances with sustainability goals. Canada is the process of issuing its first sovereign green bond, and if the United Kingdom’s recent issuance is any comparison, expect the inaugural bond to be oversubscribed.