Next trip to the grocery store, stop in the canned soup aisle and take a closer look at how the canned soups are displayed on the shelves. You may notice a gravity feed dispenser with a label area. Between 2002 and 2009, Petitioner Campbell Soup Co. purchased $31 million of Patent Owner Gamon’s gravity feed display racks protected by design patent D621,645 (“the ‘645 patent”). Campbell touted Gamon’s racks as a “breakthrough in soup merchandising,” and attributed its increased soup sales to Gamon’s racks. In late 2008, however, Campbell began purchasing Trinity’s racks having the same basic design features as Gamon’s racks. In response to an infringement suit, Campbell and Trinity challenged Gamon’s design as obvious. Campbell Soup Co. v. Gamon Plus, Inc., Case IPR2017-00091 (11 April 2018). In upholding the patentability of the challenged claim, the PTAB:

In its Final Written Decision, the PTAB provided a verbal construction of the ‘645 patent’s claim (notwithstanding the Federal Circuit’s admonition in Egyptian Goddess Inc. v. Swisa, Inc., 543 F.3d 665 (Fed. Cir. 2008), that the construction of design patent claims is better made by illustration). The PTAB construed the ‘645 patent’s claim as directed to a generally rectangular surface area, identified as a “label area,” curved convexly forward, and a contour representing a cylindrical article (e.g., a soup can) lying on its side positioned partially forward of and below the label area. Shown below in a figure from the patent, the protected elements of the design are highlighted. 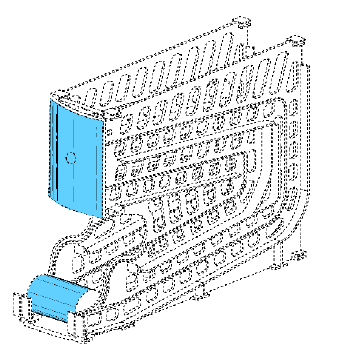 In a challenge to a design patent based on obviousness, it is well settled under the Durling test that one must first find a primary reference that qualifies as a Rosen reference (i.e. “something in existence, the design characteristics of which are basically the same as the claimed design”). Only then may the primary reference be modified in light of the secondary reference “to create a design that has the same overall visual appearance as the claimed design.” Durling v. Spectrum Furniture Co., 101 F.3d 100, 103 (Fed. Cir. 1996) (The Durling test also played a prominent role in the PTAB decision in Caterpillar, Inc. v. Miller Int’l, Ltd., IPR2015-00416, previously discussed here). In Campbell Soup, the PTAB held that a reference which must first be modified before it is “basically the same” as the patented design is not “something in existence” so as to qualify as a Rosen reference. The PTAB concluded this was so even if the presence of the missing detail was inherent in the reference’s intended use.

The Petitioner had relied on U.S. Design Patent No. D405,622 (Linz), a reference that disclosed an ornamental design for a display rack having a label area and a dispensing area. Linz did not show any object in the display rack: 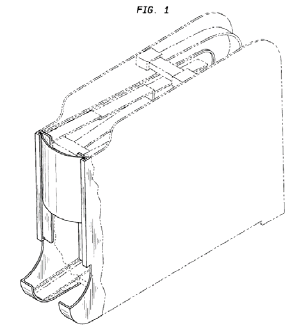 For a secondary reference, the Petitioner relied on UK Patent Application No. GB 2,303,624 (Samways), that disclosed the placement and shape of cylindrical objects with respect to a serpentine gravity dispenser: 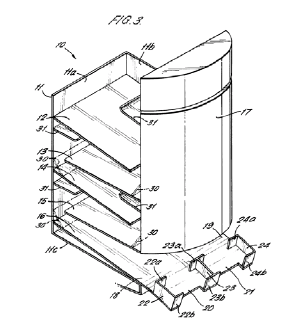 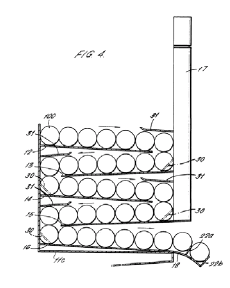 Because the Petitioner needed to first “immediately modify” Linz to include a cylindrical object lying on its side, the PTAB concluded that the Petitioner did not establish Linz as a Rosen reference. Final Written Decision at 29. A proper Rosen reference must consider what is “in existence” – not what could be brought into existence. Id. The PTAB also noted that, by alleging it would be obvious to a designer of ordinary skill in the art to modify the display rack of Linz to dispense cylindrical cans, “Petitioner improperly molds concepts of utility obviousness into the design patent obviousness analysis.” Id. at 30. A hypothetical design of a display rack with a cylindrical can conjured up by a designer of ordinary skill in the art is not “something in existence.” Id.

The PTAB further determined that the Patent Owner established the invention enjoyed commercial success with a nexus to the claimed subject matter. Relying upon evidence of Campbell’s internal market study and its 2005 Annual Report touting Gamon’s racks, the PTAB found a nexus between the ornamental features of Gamon’s design and the commercial success enjoyed by both Gamon through its sales of dispensers, and Campbell, through its increased sale of soup using both Gamon’s dispensers and Trinity’s copies.

By having included the contour of a soup can in solid lines in the drawings of the ’645 patent, and stirring in tantalizing evidence of secondary considerations of nonobviousness (including remarkable sales of the patented article to Campbell and, as a garnish, alleged copying by Trinity), Gamon had all the ingredients it needed to satisfy the palates of the PTAB judges and secure a victory.