Copyright in the Gaming Industry

Gaming industry may sound like a recreational field which is up and coming but that could not be far from the truth. The gaming industry has established its strong hold since the 1970s and the digital gaming Industry in India is growing by leaps and bounds. According to Forbes, the Indian gaming industry India is among the top 5 countries for mobile gaming in the world and crosses worth over $890 million. The size of the industry is enough to point towards the obvious need of legal protection and the role IPR can play in it considering the various facets of the field. Considering the brilliant expansion of the industry as well as the rise of legal protection it invokes, the field of IPR becomes extensively active in the sector. The most important of them all is the protection Copyright Laws bestows upon gaming works and any ancillary creation. In light of the various works in play that forms a video game, there are prominent isolated fields that can be protected by Copyright Laws. A list of these works that will be discussed in detail are as follows:

The above-mentioned list is not exhaustive in nature but are isolated for the purpose of this article as they are the most essential parts of any game. Owing to technological advancements, concepts of gaming platforms and attached copyright licenses would also be discussed in the article.

COPYRIGHTED CONTENTS IN A GAME AND ITS EFFECTS

A video game consists of many different components that translate into what we, as users, experience. All the components are in the form of software coding that translate into the user interface of a game. Although copyright is already granted over software coding, the resulting work in a video game can be copyright too such as the story line / script of a game, the characters as well as parts of the code separately. Although, contents that form part of the video game are copyrightable, any theme or concept portrayed in a game cannot be copyrighted, as this is the general rule of copyright , that no theme or concept can invoke copyright protection but only its expression in literary, artistic and musical form can. This is important to understand as, a character of a soldier from a game based on World War can be copyrighted, whereas it would not be able to restrict either another character of a soldier in a game or a game based on World War.

To shed some light upon this field of protection and the following protections, the example of Mario is well suited. One of the most famous video game character of all time is the plumber named Mario whose life revolves around saving a princess after crossing many levels. A character that is copyrighted by Nintendo and the rights of Mario (the game as well as the character) vests with them and are valid till the year 2080. This does not only mean that Nintendo can restrict any game with Mario as a character, but also have exclusive merchandising rights of the character, i.e., any toy, accessory, garment or clothing, and many other items with Mario on it can only be sold after licensing such use of the character from Nintendo.

Having used the example of Mario already, lets point towards another aspect of the game. The gameplay, which is nothing but the manner in which a player interacts with a game. It’s the way in which the game progresses based on the rules of the game as well as the interaction of the player. This includes the story, the plot, the obstacles and levels of the game. This implies the objectivity and plot of the game cannot be copied by another game and protects not only the relevancy of a game but also gives a creative liberty to the creators of the game to build up more games on the storyline of the previous game.

3) Protection of Sounds and Music:

In the video game of Mario, there is distinct music in the background which is different for each level, including the main theme of Mario created by the composer Mr.Koji Kando. These music works as well as sounds attached to certain aspects and actions of the game such as the sound of collecting coins and jumping have their own specific copyright. The music of Mario is globally famous and recognized with hundreds of instrumental covers on YouTube itself. Any usage of the music which is not licensed will be liable to give royalties to Nintendo who will further distribute it amongst the sound creators. Usually a copyright protection also covers dialogues in a game that actively uses them for player-game interface.

4) Protection of Artwork and Visual Design:

A creator of a game can most definitely get a copyright over the artwork and visual design of the game, but only to the extent that no one can duplicate it as it is. Although, if the game is of a specific genre that requires a few elements to always be present in any game in that genre then such elements would only hold copyright over its exact representation and not the whole of that actual element. This happens because the doctrine of scenes a faire comes into play. That is, a few elements that are essential for a concept or idea to be executed is not copyrightable by the creators. Such as a war themed game would have weapons and other forms of artillery. If such elements are copyrighted then no other war game would ever be made.

Before dealing with the game codes in the light of copyright protection we need to realize the role of software in gaming. First is the Game Engines, which are basic frameworks which game developers use to create games and secondly there is the readable software codes which makes games accessible on various different gaming platforms. The framework (i.e. the Gaming Engine) is either owned by or licensed to the developers. Hence, if two gaming companies use the same Game Engine, then some essential features which are overlapping in the two games based on the coding of the software engines would be rendered outside the ambit of copyright protection. Although, inherently different features being achieved by the two games using the same Gaming Engine is copyrightable separately. A few famous examples of gaming engines are: Rockstar Advanced Gaming Engine, UbiArt Framework etc. Case: In the case of Sega Genisis v Accolade Games ; Accolade through reverse engineering process created a development manual (for its gaming console) that incorporated the information it had discovered (Game code or the chip sequence of the game discs which was readable through the Sega Device) about the requirements for a Genesis-compatible game. It was held by the U.S. Court of Appeals, Ninth Circuit, that disassembling (or reverse engineering) of a copyrighted object code is a fair use of the material if it is the only way to access copyrighted elements of the code and there is a legitimate reason for seeking to do so. To give some clarity on the subject, there are two types of codes, a source code, that would be the software of a device and an object code, which is the code by which a specific piece of hardware functions with the device. In the above case the object code is reverse engineered so that game chips developed by Sega can be read and played on Accolade gaming devices.

Player licenses is a user contract, which tells the user about the terms of use of the game and all rights associated with the product. It enunciates the limitations of use of the game by the user. There also exist certain gaming services provided by Game Publishers, which act as an online portal for accessing multiple games. Two of the most popular gaming service providers are Steam by Valve and Origin by Electronic Arts.

In light of the above discussion, a flow chart showing the copyrightable content in various expression of gaming tools, is demonstrated below: 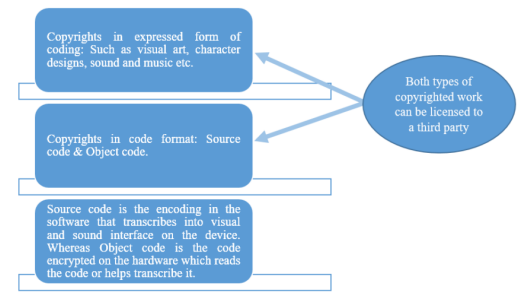 On the basis of the above analysis on importance of copyright in the gaming industry, it can be concluded that copyright amongst other IPs is one IP that protects the most number of works associated to the gaming industry and is an intricate and indispensable protection for games. A game is a mixture of various creative and interactive outputs that translate beautifully into a technologically immersive experience for the users / players. The emphasis on copyright is strong as the gaming industry is witnessing constant changes in modern times in way of playable platforms as well as enhanced user experience. Although it wasn’t promptly discussed in this article, but India does not have specific gaming laws and is dealt by the business practices in the gaming industries. This only further pronounces the need for copyright laws in gaming.