*Stuart has run several marathons, and is currently training for his first foray into the world of ultra-marathons. He has a keen interest in the development of Nike’s Vaporfly and Alphafly running shoes as he feels he needs all the help he can get!

On 12 October 2019, in Vienna’s Prater park, Kenyan long-distance runner Eliud Kipchoge did something that many thought impossible.

How about doing it 422 times in a row? That equates to a marathon, or 26.2miles, in a time of 1hr, 59minutes and 40 seconds. Smashing the seemingly unsmashable 2hr barrier.

If 100m in 17 seconds 422 times in a row is (understandably) hard to comprehend then consider this – Parkrun is a free weekly 5km run. From its humble beginnings in Bushy Park, west London, it has now grown into a worldwide phenomenon with more than 51.5 million Parkruns having been completed.

Of those 51.5 million 5km Parkruns, only five have ever been completed at a faster pace than Kipchoge ran an entire marathon. His official average speed was clocked at 13.16mph (21.18kph). The average treadmill has a maximum speed of 19-20kph. The next time you are in the gym, crank the treadmill up to its maximum speed and see how long you can keep going for! Now you’ll get the idea. And remember, Kipchoge was going faster than this.

Anyway, a marathon in under 2 hours is a phenomenal physical achievement and Kipchoge, a diminutive 5’6”, 35-year-old Kenyan, who weighs little more than 50kg, will go down in history as undoubtedly one of the greatest athletes there has ever been.

But what was he wearing I hear (probably not many of you) ask? Well, aside from a pair of shorts, a running vest and what look like arm socks, Kipchoge wore a pair of Nike Alphafly running shoes. A prototype shoe in Nike’s “fly” range and one that contains a considerable amount of tech.

The Alphafly is a super-light, thickly cushioned shoe, with three carbon-fibre plates in the sole, sandwiching two layers of fluid or foam filled chambers (known as “Zoom Air cushioning pods”) located under the ball of the foot. They build on the design of Nike’s ZoomX Vaporfly Next% model that has a single carbon-fibre plate embedded in a thick and resilient midsole foam. 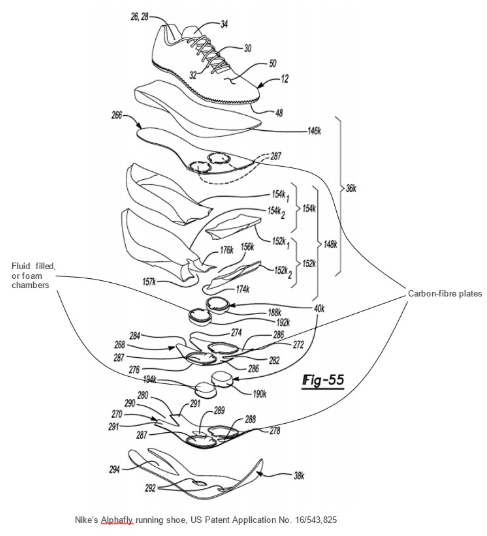 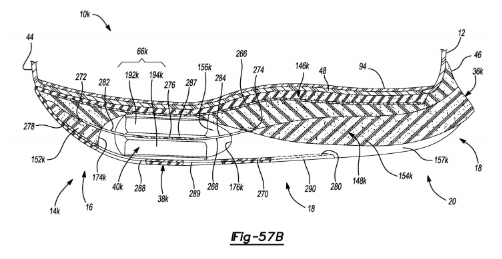 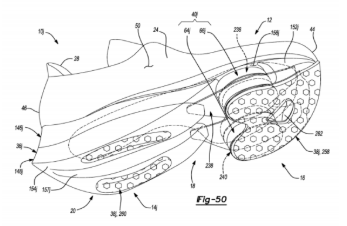 In summary, the front of the shoe is a sandwich of three carbon-fibre plates and foam, and there are two pairs of fluid or foam filled chambers beneath the ball of the foot and either side of the second, or middle, carbon-fibre plate. The first, or top plate, extends the full length of the shoe, the second, or middle plate, extends to the rear of the midsole, and the third, or bottom plate, extends to beneath the ball of the foot (to hold in place the fluid or foam filled chambers).

All this equates to one bouncy shoe. Which is essentially what all the fuss is about.

World athletics are considering whether Nike’s innovative shoe designs (the Alphafly and the Vaporfly) conflict with Rule 144.2, which outlaws “any technical device that incorporates springs.” What they essentially need to do, is define what they consider a spring to be, i.e. foam midsoles, gel, polyurethane, a single carbon-fibre plate, or a stack of carbon-fibre plates interleaved with fluid filled chambers.

EDIT: Since writing this article World Athletics have announced that Kipchoge’s Alphafly prototype shoe (using three carbon-fibre plates) will be banned from competition but the Vaporfly range (which uses one carbon-fibre plate) is allowed.

The tighter regulations are as follows:

From 30 April 2020, any shoe must have been available for purchase by any athlete on the open retail market (online or in store) for a period of four months before it can be used in competition (i.e. no prototype shoes that are unavailable for the public to buy).

And with immediate effect there will be an indefinite moratorium on any shoe (whether with or without spikes) that does not meet the following requirements:

– The sole must be no thicker than 40mm.

– The shoe must not contain more than one rigid embedded plate or blade (of any material) that runs either the full length or only part of the length of the shoe. The plate may be in more than one part but those parts must be located sequentially in one plane (not stacked or in parallel) and must not overlap.

– For a shoe with spikes, an additional plate (to the plate mentioned above) or other mechanism is permitted, but only for the purpose of attaching the spikes to the sole, and the sole must be no thicker than 30mm.