This month serves as a reminder to manufacturers, distributors, retailers and importers that consumer products carry strong liability risks when they pose risks of serious injury or death. Steps should be taken to reduce that liability, including the issuance of alerts and recalls to remove the products from the stream of commerce.

The CPSC recently issued an alert about the deadly risks posed to small children by home elevators. At least two children have been crushed to death after becoming trapped in the gap between the elevator’s exterior and interior doors. Other children “have suffered horrific and lifelong injuries,” including skull fractures, fractured vertebrae and traumatic asphyxia. The CPSC recommends that the gap be no more than four inches deep and urges consumers to have a qualified elevator inspector examine their home elevator and ensure compliance with voluntary standards. If the gap is too large, space guards or electronic monitors can be installed to help prevent serious injuries.

Two recalls are noteworthy. A manufacturer recalled stoves after receiving 133 consumer reports that the glass stovetops have turned on by themselves. This problem has caused heat damage to nearby items, led to four items catching on fire and resulted in two burn injuries. Also, a distributor recalled vinyl awning covers after receiving multiple consumer reports that the awning can unexpectedly open while users are trying to remove the cover, threatening serious injury to users in the awning’s path. In one report, a 73-year-old man died after falling from a ladder and over a balcony when the awning opened and struck him unexpectedly while he was removing the cover. The distributor is issuing free breakaway safety clips to help remedy the problem.

In Kormondy Enterprises v. Great American Insurance Company, beef and poultry cooking facility Kormondy Enterprises (formerly National Steak Processors, Inc.) sued its umbrella insurer in Oklahoma federal district court for wrongly denying coverage after the facility was sued in multiple lawsuits relating to a product recall. Kormondy alleges that it discussed product recall coverage with its insurance broker (which is the subject of a parallel professional negligence proceeding in Texas state court) when it renewed its policies and was assured that Kormondy’s $10 million umbrella policy with Great American would cover recall-related risks. Great American later denied coverage for Kormondy’s claim based on an exclusion for product recalls. Kormondy alleges that Great American’s denial breached the policy but that, if the denial was proper because the policy does not provide coverage, it should be reformed, Great American should be estopped from denying coverage and Great American should waive its right to deny coverage based on the specific representations made by the broker prior to the policy’s being procured.

In another recall dispute, a Pennsylvania federal court denied a supplier’s motion for summary judgment on claims filed against it by an insurer seeking to recover amounts the insurer paid in connection with a recall of approximately 5.2 million snack bars. In Indian Harbor Insurance v. J.F. Braun & Sons, Inc., Indian Harbor, as a subrogee of TruFood Manufacturing, sued J.F. Braun, alleging that Braun breached its contract with TruFood by suppling roasted pumpkin seeds tainted with peanuts. TruFood contracted with Braun to supply peanut-free pumpkin seeds for use in Kind snack bars. Kind discovered that the seeds it received from TruFood were not peanut free and recalled more than 5 million snack bars. Kind placed TruFood and Braun on notice of potential claims arising from the recall, and TruFood gave notice of the claims under its product contamination insurance policy with Indian Harbor.

TruFood entered into separate settlements with both Kind and Indian Harbor, resolving millions of dollars of recall-related losses. TruFood also entered into a settlement agreement resolving its dispute with Braun. Indian Harbor, as TruFood’s subrogee, later sued Braun for breach of contract arising from supply of the contaminated seeds. Braun moved for summary judgment to dismiss Indian Harbor’s claims, arguing that its settlement and release with TruFood bound Indian Harbor and precluded recovery. The court denied the motion, finding that the use of the term “successor” in the pertinent release language was latently ambiguous, meaning that a question of fact existed as to whether that term included an insurer like Indian Harbor. The court also found that Pennsylvania law did not support Braun’s arguments that Indian Harbor had waived its subrogation rights. Indian Harbor’s subrogation claims presented questions of fact to be resolved at trial.

In North River Insurance Co. v. Nationwide, et al., North River sued several insurers in Georgia federal court alleging that those insurers are liable for amounts that North River paid to a flour producer in connection with millions of dollars of losses sustained in a voluntary recall of contaminated flour. Grain Craft, Inc., produced and sold flour to customers that was later determined to be contaminated. Grain Craft discontinued the shipments, conducted a voluntary recall of the flour and submitted insurance claims to its insurers, North River, Travelers, Nationwide and Continental. North River alleged that the contaminated flour claims caused millions of dollars in property damage both before and after the effective date of its policy, April 1, 2016. North River alleges that it received and paid Grain Craft’s claims under a $15 million excess liability policy for property damage caused by the contaminated flour but that at least part of the amount paid by North River for those claims was for losses covered by various primary, excess and umbrella policies issued to Grain Craft by Travelers, Nationwide and Continental. North River asserts claims for reimbursement and contribution in excess of $11 million against those insurers. 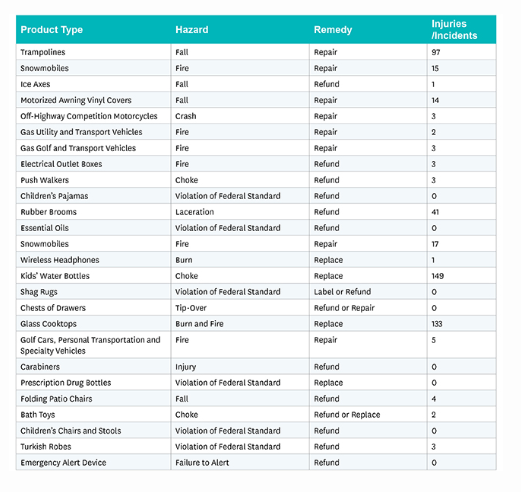