Although royalty underpayment litigation has existed since the inception of the United States oil and gas industry, the shale revolution profoundly impacted this type of litigation. This article analyzes nationwide trends in the filing and certification of royalty class action cases, which result in much greater exposure to producers than individual royalty owner cases. For example, in the past five years, producers have settled class actions for amounts in excess of $80 million.

Ninety-six putative class actions filed during the period from 2001 to the present are analyzed in this article. Since Congress enacted the Class Action Fairness Act of 2005 (CAFA), most of these cases were litigated in federal court.

These cases deal almost exclusively with alleged underpayment of natural gas royalties (oil royalty litigation rarely arose during the period analyzed). Typically, a producer sells raw gas to an affiliated or non-affiliated entity at the wellhead. The gas is subsequently gathered, compressed, dehydrated, treated, processed and transported to downstream markets where the buyer resells it to third parties at published index prices. The producer receives a wellhead price for the raw gas that is determined by an arithmetic formula based upon the buyer's weighted average resale price adjusted for the buyer's post-production costs. This formula is commonly referred to as the netback method. Ultimately, the producer pays natural gas royalties based upon the wellhead price that is determined by this formula.

The analysis below is divided into two time periods: 2001 to 2009 and 2010 to 2018. January 1, 2010 was chosen as a rough approximation of the date on which production in many of the shale plays reached a critical mass. 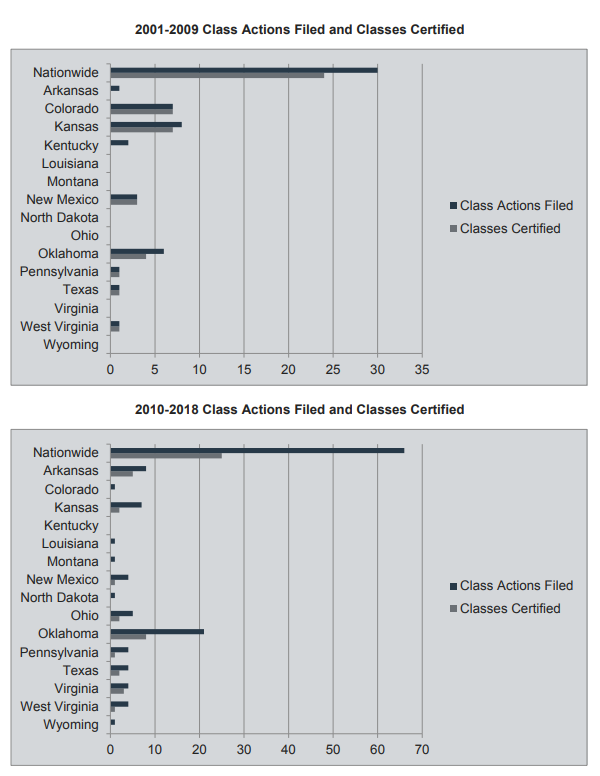