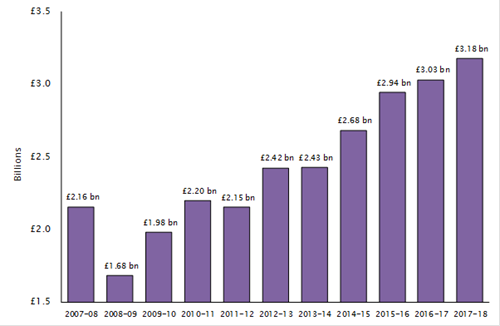 What does the chart show?

The total value of donations has risen steadily over the past decade. In the tax year from April 2017 to April 2018 individuals donated £3.18bn to charity compared to the £1.68bn given in the 2008-09 tax year. The figures are based on self-assessment returns filed by individuals from HM Revenue & Customs (HMRC) and are the latest figures available from the tax authority.

Why are donations rising?

Experts at Boodle Hatfield law firm put the rise down to more individuals, particularly higher earners, wanting to make a bigger contribution to society and a growing desire among those individuals to be seen to be doing good, as well as take advantage of tax reliefs.

Eleanor Sepanski, senior associate at Boodle Hatfield says there is a growing trend in the UK for higher earners to set up their own charity and control how the donations are channeled. But she added: “The compliance burden associated with charities in the UK is increasing and puts many of them off. For many entrepreneurs who want to contribute, but want to control the process, the bureaucracy is too much.”

The financial crisis had an immediate effect on people’s finances and their outlook. Many people halted their donations in the year following the crash but have since started giving to charity again.

Do the figures tell us anything about who is donating?

Boodle Hatfield delved into the figures for the FT and found that pensioners are the most likely category to make charitable donations, with 22 per cent of pensioners donating a total of £532m in 2017-18. This compared with the 11 per cent of employed or self-employed who donated.

There is little difference between men and women when it comes to their willingness to donate, with 12 per cent of donors being female and 11 per cent male. But Boodle Hatfield points out that the substantial wealth gap between men and women means men contributed £2.4bn in 2017-18 compared with £753m from women.

Do the figures mean more people are donating?

No, the biggest rise is among high earners. The figures found that around 58 per cent of charity donations came from people earning more than £150,000 a year in 2017-18, up from 54 per cent in the previous year.

Laura Suter, personal finance analyst at investment platform AJ Bell, said: “The average amount donated per person rose by £150 over the past year, but fewer people are actually giving money, so we have a smaller pool of people handing over more cash.”

Which areas have the highest percentage of charity donors?

Richmond topped the list with 24 per cent of residents giving a combined total of £82m to charity in 2017-18, followed by Edinburgh South, where people gave £31m, and Winchester with £9m.

Who benefits from a rise in donations?

Individual donors can claim back tax relief while charities benefit from Gift Aid. Ms Suter said: “The government handed charities £1.4bn in Gift Aid relief in 2018-19, £90m more than the previous year, although the lion’s share of this still goes to a small number of large charities.”

At the same time individuals reclaimed more than £1.5bn in personal tax relief as a result of donating to good causes. People can use their donations to help cut their tax bill, make them eligible for certain tax breaks or benefits and use them as sensible tax planning after their death.

Parents can also use their charitable donations to ensure they can access government benefits, according to AJ Bell. Any parent who earns more than £50,000 will start to see their child benefit taken away, at a rate of 1 per cent for every £100 earned — and it is wiped out once they earn £60,000.

This means the effective tax rate for those getting the maximum child benefit and earning between £50,000 and £60,000 is almost 58 per cent. But these parents can reduce their taxable earnings by giving to charity, which they then need to declare to HMRC on their tax return.

This article first appeared in the Financial Times on 5 July 2019.