The past few years have seen a rise in the use of DLT as businesses have continued to explore applications for DLT in their commercial models to deliver less costly and more streamlined goods and services. In Australia, banks and other financial services firms have been at the forefront of this push, which has culminated in a number of successful pilots for DLT applications in the financial services sector. Debt capital markets is one of the areas that has made significant inroads into commercialising DLT applications in a bid to give issuers, arrangers and investors access to a more efficient and less costly bond issuance platform.

The Australian debt capital market relies on cooperation between multiple actors to facilitate a range of debt securities transactions including issuance, exchanges, buy backs and secondary market trading. The actors involved include lead managers, issuers, investors, trustees, registrars, custodians, nominees, paying agents and clearing houses. Implementing the debt issuance process on a DLT platform has the potential to revolutionise these transactions by significantly reducing the numbers of parties involved. By way of example, the figure below highlights the transactions involved in the issuance process which may be disrupted by DLT. 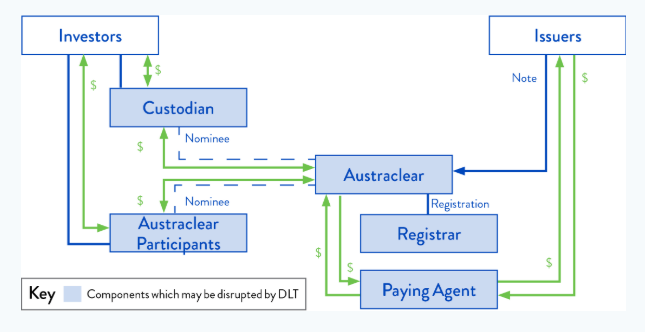 As demonstrated in the diagram (and explored in more detail later in this series), these disruptive features promise the following benefits:

A summary of some of the key DLT concepts leveraged by bond issuance platforms to deliver these benefits follows.

In the context of debt capital markets, DLT’s greatest strength is its ability to create a ledger or database that holds a record of transactions (or other data) between peers across several participants on a blockchain network. Each participant (or node) holds an identical copy of the same ledger (either the entire ledger or partial ledger) which can only be changed with the consensus of all participants. This creates an immutable single source of truth relating to the entire history of the ledger, removing the need for a central authority.

Another DLT feature which is critical for debt capital markets transactions is its ability to create blockchain networks with a range of public, private, open or closed characteristics, as summarised below:

Examples of some of the more common applications for these networks are summarised below:

A number of pilot projects have been launched globally to explore the commercial viability of DLT bond issuance platforms. The “BOND-i” issuance in 2018 was a significant watershed moment for Australia’s contribution to this global effort. A summary of the key features of this issuance follows.

A BOND-i is a bond governed by New South Wales law and at the time was considered the first bond globally to be created, allocated, transferred and managed using blockchain. Commonwealth Bank of Australia (CBA) was the sole arranger of the bonds, which were rated AAA/Aaa and issued under the World Bank’s Global Debt Issuance Facility. The issue was aimed at a small number of institutional investors rather than the broader wholesale market, and had the support of the Northern Trust, QBE, Treasury Corporation of Victoria, TCorp, First State Super, the South Australian Government Financing Authority and CBA.

Each BOND-i was issued pursuant to a set of Final Terms which outlined the structure, process and associated risks of the issuance. The total issuance volume was A$110 million.

Each BOND-i was issued and distributed on a private instance of the Ethereum blockchain platform, operated by the World Bank and CBA. The underlying platform, maintained by CBA, is comprised of four nodes between CBA and the World Bank in Sydney and Washington respectively, and is an example of a private and closed network. Each investor (and other participants) has permissioned access to the platform which allows them to see real time data relevant to their role and portfolio, with access conditional upon acceptance of the “Platform Rules and Procedures” (Platform Rules).

The issuance process involved the uploading of term sheets onto the platform, with investors being able to bid directly with the issuing entity for near-instant book-build. All transactions (including issue, transfer and redemption) are capable of being implemented via smart contracts and recorded on the private ledger constituting the platform. Although this allows for the creation of a comprehensive audit trail capable of evidencing who holds title to the bonds during their life cycle, the BOND-i terms do not extend to permitting the recordings in the ledger to constitute legal title to the bonds. Instead, legal title is evidenced (in the conventional way) by the off-chain bond register of held by CBA (as registrar) in its Sydney office.

The Platform Rules were made in accordance with the International Organisation of Securities Commission’s principles for financial market infrastructures. They govern information access and modification restrictions on the platform, as well as requirements to maintain correct transaction information. They ultimately require each investor or participant to validate a transaction before it can be added to the ledger. These validated transactions result in a modification of the ledger information and a request for a reciprocal change in the official register.

Payments of principal and interest on a BOND-i can only be made in Australian currency off-chain and not through an on-chain or native cryptocurrency associated with the blockchain. The potential application of Goods and Sales Tax (GST) to the acquisition and disposal of cryptocurrencies that are linked to fiat currencies has historically been a barrier to the adoption of DLT payment rails for these and similar transactions, among other technological barriers. Further clarification in this area will accelerate the move by the Australian debt capital markets to more widespread DLT issuance.

There are a number of blockchain-specific risks related to the developing nature of DLT technology that investors need to be aware of. These include cyberattacks, denial of service attacks, software errors, and theft, loss or compromise risks associated with the underlying technology. There are also general unknowns relating to how the technology might perform that cannot be foreseen before an issuance. These risks were managed in the context of the BOND-i transaction, by retaining the participants’ ability to trade outside the platform, with a fall-back to a non-DLT framework if there was a problem with the platform.

The World Bank and CBA recently expanded the functionality of BOND-i to mirror off-chain secondary market trading on the on-chain ledger. Once fully developed, this functionality should facilitate the management of a bond throughout its lifecycle from creation and allocation to transfer and redemption.

Generally, the proposed use of DLT to record secondary market trading for BOND-i has been well received. Since the primary BOND-i issuance, two additional investors have been added to the platform as a result of secondary market trading. The platform has also been extended to allow for permission viewing by Singapore investors, as well as the Australia based investors who participated in the primary issuance. Market commentators have noted that this represents considerable progress in the quest for debt capital markets to achieve faster, more efficient and more secure transactions that can be coordinated in a more streamlined manner.

The BOND-i has demonstrated the ability of the Australian debt capital markets sector to harness the potential of DLT to create immutable recording capability.

However, the next stage of development for these markets is the creation and trading of an on-chain-only debt instrument (i.e., a blockchain bond as the legal instrument tracked through an on-chain ledger), followed by the integration of on-chain payment rails.

In the next part of this series, we will take a detailed look at some global case studies of blockchain-based bond issuances which Australia may be able to leverage in its pursuit of this next stage.