Protection of well-known trademarks in China

There is no sole well-known trademark protection law in China. We must explore the actual protection scope from different Chinese laws and judicial interpretations, which may mainly include the following:

This article will base on above laws and judicial interpretations and provide a creative analysis of the respective protection scope of different types of trademarks (from normal trademark to well-known trademark) while combating others’ rights or acts. 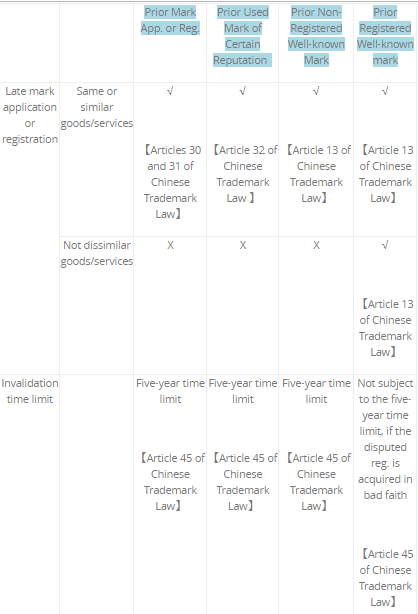 It appears from the list that the prior used trademark of certain reputation and non-registered well-known trademark enjoy the same level of protection. However, in practice they are not same in similarity determination of goods and marks because the protection scope changes naturally along with the degree of reputation.

“Five-year time limit” means that a prior rights holder or an interested party may apply for declaration of invalidation of the registered trademark within five years from the date of trademark registration. This is a result after balancing the interests between the prior rights holder and the trademark registrant. However, a well-known trademark holder is not subject to the “five-year time limit” when the disputed registration is acquired in bad faith. The different rules as to the invalidation time limit can strongly support the broad protection of a well-known trademark in China.

The following list will reflect that if someone use a sign as a trademark in commerce and the said use is conflicting with the earlier trademark rights, how the reputation of a well-known trademark will affect the protection scope. 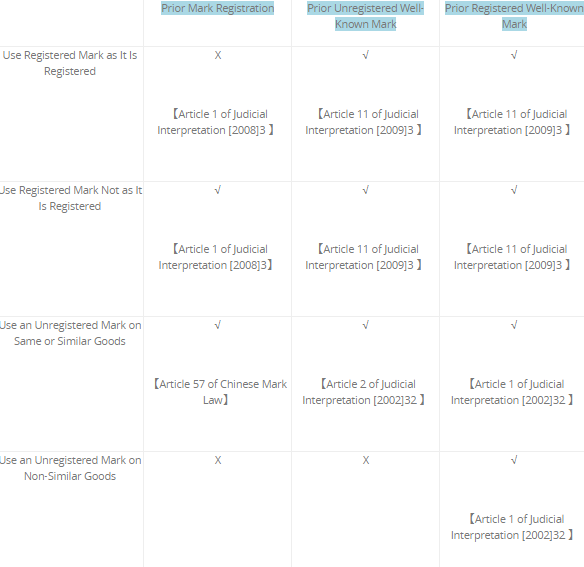 After the above analysis, now it is clear why the well-known trademark is deemed as having broadest protection in China. What’s more, trademark holders or trademark practitioners may check the above lists to know the respective protection scope of trademarks when encountering different conflicts.

In China, CNIPA and Chinese Courts designated by China Supreme People’s Court are the only competent authorities in well-known trademark recognition.

They may determine whether the trademark is well-known trademark, upon the request of a party and when necessary for case examination or handling, in the following types of cases:

As noticed from the above, domain name related disputed cases are not competent for recognizing well-known trademarks in China.

1. A trademark will be granted broadest protection scope in China, if it is recognized as a well-known. Furthermore, the record of well-known trademark recognition will play a substantial impact for future cases based on the same mark. Therefore, it is recommended to applying for recognition when encountering a proper case.

2. The most difficult part for an applicant in well-known trademark recognition is to submit enough evidence proving that his trademark has become well-known. The evidence should prove the reputation of the applicant’s mark before the date of filing of the disputed mark or before the date of the alleged use. The evidence is better formed in mainland of China (excluding Hong Kong and Macao), because the reputation in other jurisdiction is deemed as a reference. Well-known trademark recognition is a very challenging protect. It is advised that the applicant put great efforts to fully demonstrate that it is a leading brand in the relative field in China.

"One patent for one invention" is an established doctrine under the Chinese patent regime. However, a recent decision delivered by the Supreme People's Court made it possible for one invention to have more than one patents.

On July 14, 2008, the Supreme People's Court made its decision on the case, reversing the decision of the Beijing High People's Court. According to the court, the principle of "one patent for one invention" means that it is not allowed to have two or more concurrently valid patents over one invention. Once a patent is terminated, it doesn't necessarily mean the subject matter of the patent become part of the public domain. The court is of the opinion that two patents relate to identical inventions only if protection scope claimed in one patent is identical with that of another one.