On February 21, 2019, the Ontario Energy Board (OEB) released the Staff Report to the Board on Rate Design for Commercial and Industrial Electricity Customers (the Staff Report). The Staff Report is titled “Rates to Support an Evolving Energy Sector” and sets out OEB staff’s recommendations for new rate designs for electricity commercial and industrial (C&I) rate classes. Among other things, the Staff Report includes recommendations to: (i) establish a fixed distribution charge for commercial customers with demands under 10 kW whose use of the distribution system is like residential customers; (ii) implement a demand charge (rather than the current volumetric charge) for C&I customers with demands between 10kW and 50kW; and (iii) introduce a “capacity reserve charge” for customers with load displacement generation to replace stand-by charges and provide for recognition of the benefits of this generation on the system. As set out in the cover letter for the Staff Report, the OEB invites comments from stakeholders by March 29 (including comments on a list of questions provided), and has convened a stakeholder conference on March 7 to allow stakeholders to ask questions about the Staff Report.

The OEB started a consultation process on C&I rate design in May 2015 (as discussed in a prior post). This was a complementary process to the residential rate design consultation that resulted in an OEB Policy requiring all distributors to move to fixed distribution charges for all residential customers (discussed here).

On March 31, 2016, OEB staff published a Staff Discussion Paper titled "Rate Design for Commercial and Industrial Electricity Customers: Aligning the Interests of Customers and Distributors." As discussed in an earlier post, the 2016 Staff Discussion Paper addressed general issues around rate design for large electricity customers and set out several new rate design options. OEB staff’s goal was to "facilitate customer choice by ensuring that the new rate designs support innovation and enable access to energy options." Among other things, OEB staff endorsed having distribution rates being more closely impacted by a customer's peak demand. With that principle in mind, OEB staff proposed six different rate design options for comparison and comment, some of which were quite complicated (such as “three-part demand rates”).

Interested parties commented on the 2016 Staff Discussion Paper, and then OEB staff undertook further consultations with customer groups and distributor organizations, and commissioned research from several consultants. OEB staff indicates that its new February 2019 Staff Report takes account of the information gathered, as well as direction provided in the OEB's Strategic Blueprint (discussed here) to design rates that support the efficient use of infrastructure, enable greater customer choice and control, and give all customers a better signal regarding the cost of delivery.

The introduction to the Staff Report sets out important context for the rate design options that are proposed, explaining that:

Built to meet the instantaneous needs of all connected customers, there are few costs in the distribution system that change with the energy that flows through the grid. … Under the current rate design, a customer that lowers its consumption also reduces its volumetric charge. This can lead to the customer not paying the cost of system assets that it may still need as a result of its technology choice or that were built specifically for them. This shifts risk and costs unfairly to other customers. … The current rate design of fixed and volumetric charges does not align well with the changing use, expectations and value to some customers. It can lead to uneconomic decisions by the customer and shifting of costs to more traditional customers who are either unable to, or choose not to, adopt new technologies.

That context sets the stage for the OEB staff recommendations, which are focused on C&I customers paying rates that are intended to be more closely linked to the costs to serve those customers. This involves a number of proposed changes, including the following:

The following table, taken from the Staff Report, summarizes the recommendations being made: 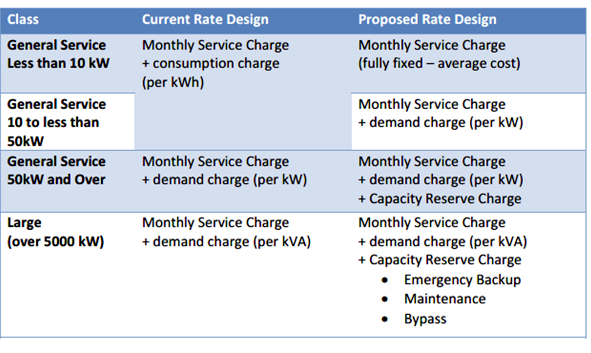 OEB staff proposes the following for implementation: (i) the new GS <10kW fixed rate would be phased in over five years; (ii) “gradually” transition larger GS <50kW customers from a monthly load consumption charge to an hourly demand charge (such that both would be charged with the relative weighting charged over time); and (iii) the new capacity reserve charge would apply immediately for customers installing new distributed generation and would be phased in for customers who already have distributed generation, but who are not currently paying stand-by charges.

The OEB will hold a stakeholder conference on March 7, 2019, to allow stakeholders to ask questions about the Report. The cover letter for the Staff Report provides details about how to participate.

Parties may provide comments on the Staff Report by March 29, 2019, including in response to specific questions set out in the appendix to the cover letter for the Staff Report. The OEB indicates that it will decide next steps after reviewing stakeholders’ comments.