The Intellectual Property office has recently issued its Annual report for the years 2018-2019. Our post covers some interesting aspects of the report.

Firstly, the report counts its notable achievement during the course of year as below:

To elaborate on the last point, the Indian Patent office has started to access the information available in the WIPOCASE during examination of the national phase applications to reduce burden on applicants for filing such documents. WIPO DAS has facilitated the exchange of Indian Patent documents, search and examination reports with other offices and make the documents available electronically leading to better quality patents and better decision-making by patent authorities.

The report also mentions implementation of Patent Prosecution Highway (PPH) between India and Japan as one of the key development during the last year.

In terms of international treaties, the following treaties were approved by the Indian Government:

Overall, from the data give below it can be assessed that IP Filings have seen a growth in numbers. It is apparent that over a period of 5 years between 2014 and 2019, Patent filings have increased by 18%, Design filings by 34% and Trademark filings by over 53%. 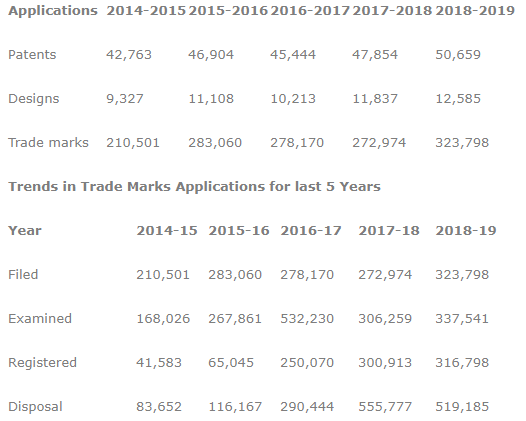 Trends in Patent Applications during the last 5 years

Trends in Design Applications during the last 5 years 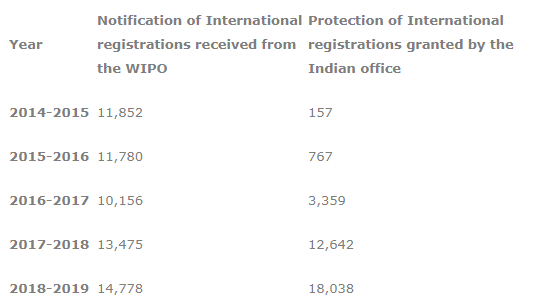 As can be seen from the above table, the number of applications designating India continue to rise year on year. By the end of year 2018-19, a total of 14,778 designations were received by the Indian IP office. However, taking past designations into account, a total of 18038 applications were granted protection. Though India does not appear among the top 10 countries of origin and designation under Madrid, India joining the Madrid protocol has helped in creating overall efficiency in terms of examination of applications and more streamlined registration procedure.

Further, the report states that till the end of year 2018-19, in respect of 30,044 cases provisional refusals consisting of objections for protection of respective marks in India were communicated to the WIPO and in respect of 1141 cases, third party oppositions to protection of the marks were received. 65 oppositions were finally disposed of.

In so far as the contentious matters are concerned, the Registry data would show 51,975 Notices of opposition and applications for Rectification of the Register were filed during the year 2018-19 and a total of 50,828 such cases were finally disposed of. The disposal rate is healthy though does not project real picture, as previous year data is not made available. The disposed of cases comprised cases that were pending from the previous years. Overall, as we see this scenario, the Registry is disposing of less number of contentious matters than those which are being filed every year and this has resulted in backlog of cases with many cases waiting for hearing. 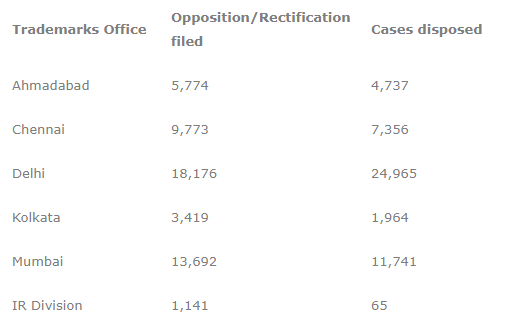 For Patents, the report mentions;

To sum up, the trends indicate substantial investment made by the IP office in strengthening technical manpower to enhance efficiency, uniformity and consistency in processing of IP applications. Further, efforts are being made to provide balanced and transparent IPR framework, dissemination of IP-related information, creating IP awareness in the country and nurturing bilateral cooperation at the international level. Much work is still required to be done in improving disposal of contentious matters adhering to the strict timelines so that any opposition and cancellation actions are dealt with in a timely fashion.