Employment news: employers can expect new problems as marijuana starts to be decriminalised in the US

By: ​Mark A. Saloman

Some parts of the US have already fully legalised the use of marijuana, others are allowing for medicinal use, while still others are holding on to full prohibition [see map below]. This article discusses the potential workplace safety and employment law consequences for employers of the proposed legalisation of recreational marijuana in New Jersey. What’s happening in the state of New Jersey is fairly typical of the kind of changes taking place across the whole of the US – and it raises some interesting questions for employers.

The decriminalisation of marijuana in New Jersey was a cornerstone of Governor-elect Phil Murphy’s campaign platform. The proposed bill most likely to become law with the new administration comes as employers are just getting comfortable with a workforce eligible for medical marijuana use. Though similar to current medical marijuana policy, the new law legalising recreational marijuana use will affect hiring, discipline, and firing decisions in novel and important ways.

Since 2010, cannabis use has been limited to medicinal purposes under the New Jersey Compassionate Use Medical Marijuana Act (‘CUMMA’). Under CUMMA, employers must reconcile accommodating employee-alleged disability (that is, treated by prescription marijuana) with the competing need to ensure a safe and unimpaired workforce. This does not prevent employers from disciplining or terminating impaired employees, as the law specifically prohibits anyone—even someone with a prescription—from operating any vehicle or stationary heavy equipment while under the influence of marijuana. Likewise, nothing in CUMMA requires any New Jersey employer to accommodate the medical use of marijuana in any workplace.

Anticipating a change in administration, New Jersey’s legislature introduced Bill S3195 in June 2017. If enacted, S3195 will legalise recreational marijuana use in New Jersey. Among other things, it will allow for the possession of up to one ounce of dried marijuana, 16 ounces of edible cannabis products, and 72 ounces of cannabis in liquid form. The sales tax on recreational purchases will start at 7% in the first year, rising by 5% annually thereafter. Recreational marijuana would first be sold at the five existing medical marijuana dispensaries in New Jersey (in Bellmawr, Cranbury, Egg Harbor, Montclair, and Woodbridge), with other licensed locations to follow.

S3195 mirrors CUMMA because it does not require any New Jersey employer to allow marijuana use in the workplace. Likewise, employers can still maintain zero-tolerance policies prohibiting marijuana use or intoxication by employees during work hours.

S3195, however, differs from CUMMA in one significant respect: it will make it unlawful for employers to refuse to hire, fire or take ‘any adverse employment action’ against an employee merely because that person uses marijuana. There are two exceptions to this prohibition. First, where an employer has ‘a rational basis’ for their action, which is ‘reasonably related to the employment.’ This presumably includes safety-sensitive positions and instances in which the current or prospective employee’s role and responsibilities require them to be drug-free. Second, employers will remain free to take adverse employment action against an employee if failure to do so places the employer in violation of federal law or causes it to lose a federal contract or funding.

The new legal claim created by S3195 joins New Jersey’s Law against Discrimination and Conscientious Employee Protection Act as yet another legal landmine facing New Jersey employers. Early indicators suggest the bill will be fully implemented by the summer of 2018. In advance, hiring and disciplinary procedures and protocols should be updated to both maximise compliance with this new law and minimise management’s potential liability. 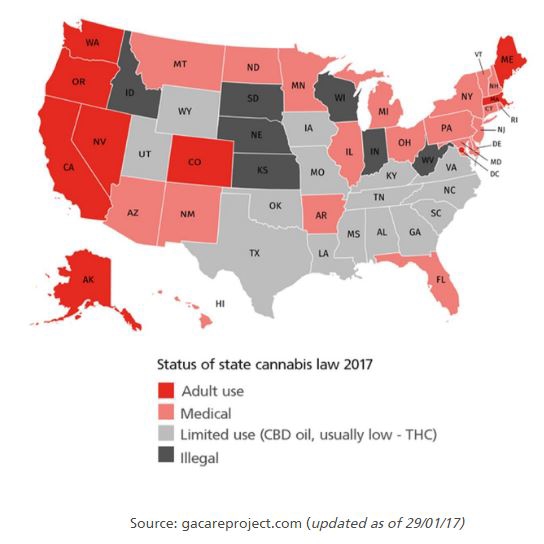