As a follow-up to the post on the release of the 2019 Revised Patent Subject Matter Eligibility Guidance on January 7, 2019, (“Revised Guidance”), the Patent Trial and Appeal Board (“PTAB”) recently decided Ex Parte Smith Appeal No. 2018-000064 on February 1, 2019, in view of the Revised Guidance. The PTAB also designated the decision in Ex Parte Smith as informative on March 19, 2019.

Now, what is so surprising about Ex Parte Smith? The PTAB affirmed that a business method for trading derivatives on a hybrid exchange system is patent eligible. How exactly is this any different than a computerized scheme to mitigate settlement risk, which was found to be patent ineligible in Alice Corp. v. CLS Bank Int’l, 573 U.S. 208 (2014) (“Alice”)? The following depicts the two representative claims: 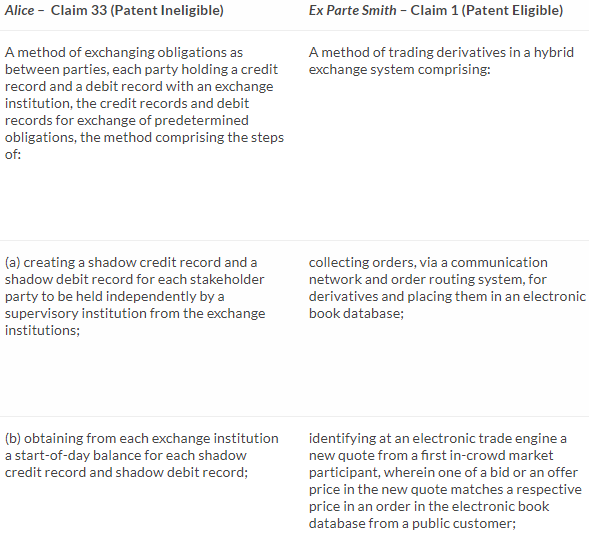 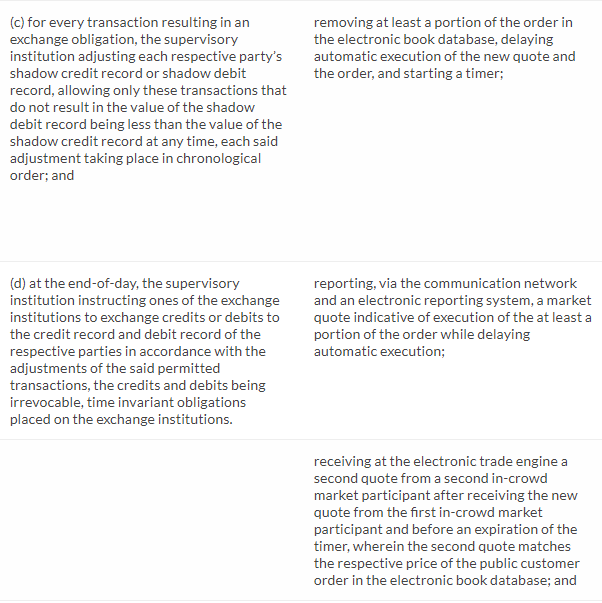 At a quick glance, the claims appear to be very similar, but with the exact opposite outcomes. What led the PTAB to conclude that Claim 1 of Ex Parte Smith was patent eligible when it looks to be so similar to the patent ineligible claim in Alice?

The Examiner argued the following points:

The Appellant argued the following points:

In applying the Alice/Mayo test along with the Revised Guidance, the PTAB first identified the limitations in Claim 1 under broadest reasonable interpretation that recite the fundamental economic practice of derivative trading because the limitations all recite the operations that would ordinarily take place in a derivatives trading environment. By this identification, the PTAB concluded that Claim 1 did recite a judicial exception of a fundamental economic practice.

While the PTAB agreed with the Examiner that Claim 1 recites a judicial exception and generic computer components, in complying with the Revised Guidance, the PTAB proceeded to identify additional limitations that focus on addressing problems arising in the context of a hybrid trading system, which is the fourth argument raised by the Appellant. Just like the identification of judicial exception, the PTAB identified the “timing” limitations in Claim 1 under broadest reasonable interpretation that are focused on addressing the problems in the hybrid trading system. The PTAB concluded that these “additional elements limit the conventional practice of automatically executing matching market orders by reciting a specific timing mechanism in which the execution of a matching order is delayed for a specific period of time.” The PTAB cited to specific sections in Appellant’s Specification as evidence that the “timing mechanism” provides a technological improvement over prior derivative trading systems. The PTAB also dismissed the dissent’s assertion that the “timing mechanism” is inherent by citing DDR Holdings, LLC v. Hotels.com, L.P., 773 F.3d 1245 (Fed. Cir. 2014), where the patent eligible claims “overcome a problem specifically arising in the realm of computer networks.” The PTAB was clearly persuaded with Appellant’s fourth argument because the PTAB concluded that the additional “timing” limitations in Claims 1-6 integrate the judicial exception into a practical application (satisfying prong two in Step 2A of the Alice/Mayo Test), and therefore, Claims 1-6 are patent eligible because they are not directed to a judicial exception.

Ultimately, Appellant’s Claim 1 and Specification made the biggest difference in the outcome of Ex Parte Smith versus Alice because the PTAB was able to identify additional “timing” limitations in Claim 1 that addressed technical problems identified in the Specification. However, the Revised Guidance clearly helped the PTAB look beyond a judicial exception and generic computer components to find the additional limitations in Claim 1 that integrate the judicial exception into a practical application. Thus, Ex Parte Smith truly is informative on the role the Revised Guidance plays in the Alice/Mayo test, as well as being informative on the need to use broadest reasonable interpretation while analyzing a claim using the Alice/Mayo test.

At least for business methods, the name of the game is now the claim and the specification.