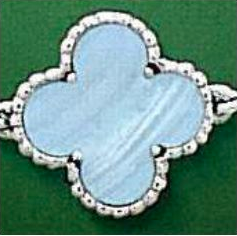 Federal Registration 4,763,030 is for the following mark:

Federal Registration 4,326,883 is for the following mark: 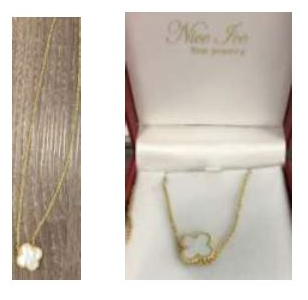 This case is interesting because the Defendant is not attempting to pass off its jewelry as genuine Van Cleef & Arpels jewelry. It advertises its product as “look-a-like” jewelry. Accordingly, the actual purchaser of the product is not confused; they know they are not buying the original, and it is unlikely they believe the product is sponsored or approved by the trademark owner. Rather, the confusion in the marketplace is “post-purchase” confusion. Other people seeing the jewelry worn by the owner are likely to believe it is the genuine product. The Second and Ninth Circuits, along with most other circuits, have held that post-purchase confusion can establish the required likelihood of confusion under the federal Lanham Act.

Van Cleef & Arpels did not allege trade dress dilution, which would require a showing that the Alhambra trade dress is famous. Under a dilution claim, if the trade dress is proven to be famous, the owner need not also prove there is a likelihood of confusion. They need only show that the distinctiveness of the famous trade dress has been impaired by a similar mark. The courts have typically raised a fairly high bar for trademark owners attempting to prove their mark is famous before they can avail themselves of the federal Trademark Dilution Act.

In this case, Van Cleef & Arpels are probably sufficiently confident in their claim of post-sale confusion that they did not feel it was necessary to go to the expense of submitting proof that their trade dress is famous.