Over the past two years, we have examined the impact of the new voting policy initiated by ISS Governance (ISS) in 2016 on the corporate governance practices of newly public companies.

The voting policy recommends a vote against directors of newly public companies due to the adoption, prior to or in connection with an IPO, of corporate governance policies that adversely impact shareholder rights. ISS updated the policy in 2017 to expand the adverse vote recommendation to directors of IPO companies with a multi-class capital structure with unequal voting rights. ISS also removed as a positive factor in the policy the public commitment by the company to have a shareholder vote on the provision within three years of its IPO. In its place, ISS included a more stringent requirement of a reasonable sunset provision with the intention of ensuring that the adverse practice is eventually eliminated. Last year we analyzed ISS’s voting recommendations for 2015 IPOs, the voting impact of the ISS policy and what impact the policy had on governance practices for 2016 IPOs. This year, we continue our review by surveying ISS’s voting recommendations for 2015 IPOs and 2016 IPOs and the effect of ISS’s policy on the governance practices for 2017 IPOs.

The ISS voting policy states that for newly public companies, ISS will generally vote against or withhold votes from individual directors, committee members or the entire board (except new nominees, who are considered on a case-by-case basis) if, prior to or in connection with the company’s IPO, the company or its board adopted by-law or charter provisions materially adverse to shareholder rights, or implemented a multi-class capital structure in which the classes have unequal voting rights. ISS considers the following factors when making its voting recommendation:

Although the ISS policy does not define “charter provisions materially adverse to shareholder rights,” the ISS policy on director performance evaluation identifies problematic provisions to include: a classified board structure; a supermajority vote requirement; either a plurality vote standard in uncontested director elections or a majority vote standard contested director elections; the inability of shareholders to call special meetings; the inability of shareholders to act by written consent; a multi-class capital structure; and/or a non-shareholder-approved poison pill.

For subsequent years, ISS recommends that unless the adverse provision and/or problematic capital structure is reversed or removed, votes for director nominees should be on a case-by-case basis. 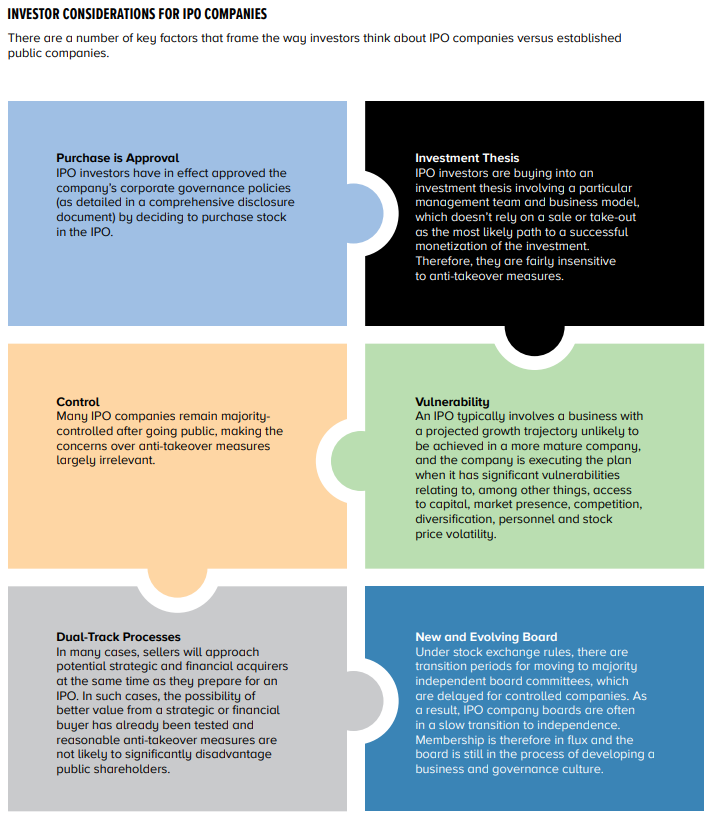 In order to evaluate the impact of the ISS policy and voting recommendations, we examined IPOs that were priced with a size of at least $100 million to analyze governance practices that we would expect to be considered problematic by ISS. Foreign private issuers, special purpose acquisition companies, master limited partnerships and real estate investment trusts were excluded. IPOs were roughly evenly split between the NYSE and Nasdaq. 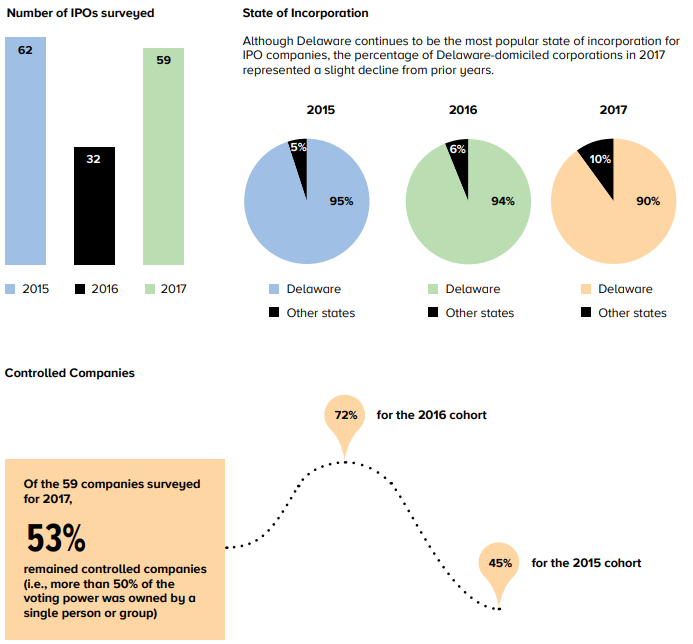 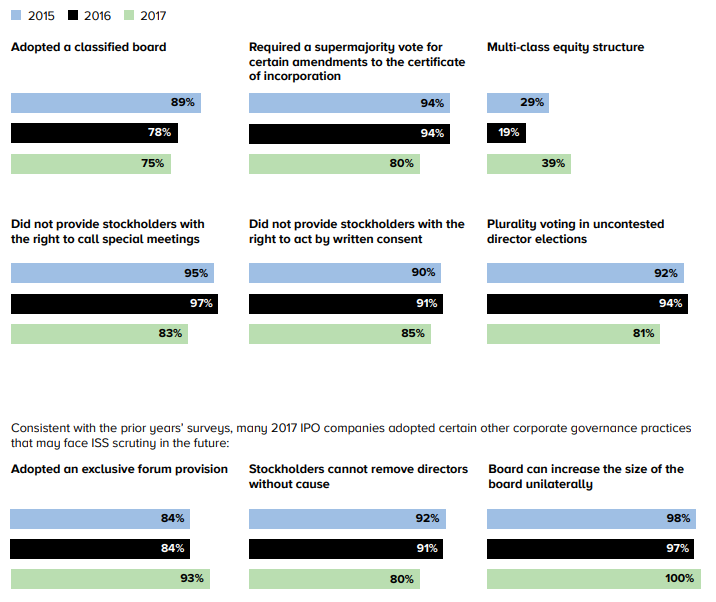 We analyzed ISS voting recommendations for director nominees at annual meetings for the 2015 and 2016 IPO companies.

Consistent with last year’s survey, ISS continued to follow its voting policy for newly public companies by making withhold or against recommendations against director nominees for the 2016 IPO companies. Although there was an impact on the voting percentages for the director nominees, we are not aware of any director that failed to be elected due to negative recommendations. Consistent with the results for the 2015 cohort, the governance factors most commonly cited by ISS as a basis for a withhold or against recommendation against director nominees was the failure to remove, or subject to a sunset provision, a classified board and supermajority voting requirements to amend certain charter or by-law provisions. The existence of a problematic capital structure in which different classes have unequal voting rights was also cited in the recommendations for companies in the 2016 cohort with multi-class equity structures and differing voting rights. Problematic capital structure was not included as a factor in the recommendations for the 2015 cohort as it was included in the ISS policy after the first annual meeting for these companies. As noted above, for subsequent annual meetings, ISS recommends that votes for directors should be on a case-by-case basis unless the adverse provision and/or problematic capital structure has been removed. Based on our review of the data, ISS recommended withhold or against votes across the board at the second and third annual meetings for companies in the 2015 cohort and the 2016 cohort that had not removed such governance practices or made them subject to a sunset provision.

In addition to analyzing the ISS voting recommendations, we reviewed proxy statements and other securities filings for the 2015 and 2016 IPO companies to determine if any charter or by-law amendments had been approved or proposed since the company went public. Two 2015 IPO companies and five 2016 IPO companies declassified their board and/or removed supermajority voting provisions since their IPO. In all cases, ISS had recommended a withhold or against vote for director nominees at the previous year’s annual meeting due to the companies’ classified board and/or supermajority voting provisions. Of the seven companies that removed the adverse governance provisions, six were controlled companies at the time of their IPO. Several of the companies specifically noted the exit of the sponsor or controlling stockholder as the rationale for the charter amendment, while others cited corporate governance best practices for the change. It is possible that for these companies, the combination of the negative ISS voting recommendation and exit for controlled company status encouraged the quick removal of the adverse provisions, perhaps as a move to establish positive shareholder relations as a “new” (non-majority-controlled) public company.

While the 2017 survey showed a decrease in the adoption of governance provisions that run afoul of the ISS policy on newly public companies (in particular, classified boards and supermajority voting provisions), it is too early to conclude that the ISS policy prompted the shift in 2017 or that it will be continued in 2018.

Although controlled companies continued to enjoy immunity from the ISS policy and voting recommendations, some companies took action to remove aggressive governance provisions as soon as they were no longer controlled, possibly due in part to the ISS policy and voting recommendations. We are curious to see if additional companies amend their governance structure as they mature as public companies.

Boards of newly public companies should continue to monitor the impact of ISS voting recommendations as they relate to their own company’s governance practices. Additionally, boards should give consideration as to whether to establish sunsets for certain governance practices at the time of the IPO and the appropriate time to take another look at corporate governance practices (for example, upon exiting controlled company status).

To view all formatting for this article (eg, tables, footnotes), please access the original here.
Shearman & Sterling LLP - Richard B. Alsop and Rupa Briggs
Back Forward