Applicability and Implication of Goods and Services Tax on Intellectual Property

Introduced in 2017, the Goods and Services tax (GST) is a destination based consumption tax subsuming in itself, the erstwhile taxes like sales tax, service tax, excise etc. Under the GST regime, the tax is levied simultaneously by the Central as well as the State/Union territory Government and such tax is levied on the “Supply”1 of “Goods”2 or “Services”3 or both. As per the World Intellectual Property Organization (WIPO), Intellectual Property (IP) refers to creations of the mind, such as inventions; literary and artistic works; designs; and symbols, names and images used in commerce. These usually take the form of Trademarks, Copyrights, Patents and industrial Designs etc.

Intellectual Property is an Intangible right of its owner, which often creates confusion as to its taxability whenever such right has to be transferred. Section 9 of the CGST Act, 2017 states that CGST shall be levied on the value determined under Section 15 of the same act on all Intra-state supply of Goods or Services or both at such rates notified by the government with GST council’s recommendations. Thus, vide. the tax rate notification 4, which states as follows :

It can be inferred that Intellectual Property has been taxed and classified as “Service” under GST law as the above-mentioned notification pertains to taxation of services at specified rates.

The Service accounting code 5 (SAC) provides for the respective rate for various classified services in the main group. In regard to the Intellectual Property, in the group  99733 which relates to ‘Licensing Services for the right to use Intellectual Property and similar products’,  the various sub-heading which are relevant are stated as follows : 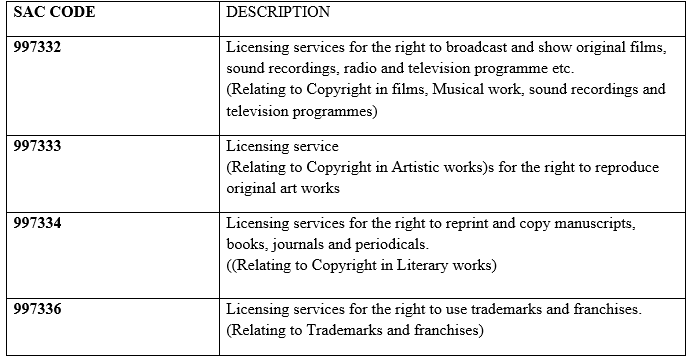 Further, to eliminate the dilemma for taxation of IP, the Press-release dated 10th November 2017 gave a clearer view of this issue, highlighting the recommendations on changes in GST rates given by GST council. The press release inter-alia stated that

Therefore, it can be inferred that Licensing services in relation to various Intellectual property are rated at 12%.

However, a simultaneous reading of the explanation clause in the notification, specifically clause 4 sub-clause (ii), which states that “Reference to “Chapter”, “Section” or “Heading”, wherever they occur, unless the context otherwise requires, shall mean respectively as “Chapter, “Section” and “Heading” in the annexed scheme of classification of services (Annexure).”7  However, in the above-mentioned Annexure, it is only ‘Licensing services for the right to use intellectual property and similar products’ that has been mentioned in the Group 99733.

Therefore, the annexure to the notification fails to provide for the “Assignments” of the IP and only provides for the “Licensing” part. But co-jointly reading the press-release and the annexure, it can be inferred that whether there is a permanent transfer of Intellectual property(assignment) or just a temporary transfer for Licensing, the applicable rate is 12%. For convenience, it is imperative to highlight the key difference between the two terms :

Difference between ‘Assignment’ and ‘Licensing’ of Intellectual Property

It is to be noted that there is a significant difference between transfer of ‘copyrights’ and that of ‘copyrighted work.’ Transfer of copyrights mean the transfer of the inherent right of the ownership from the original author to any other person which attracts a GST rate of 12% (18% in case of trademarks) whereas, when such literary, dramatic, musical, artistic or film work is produced into a CD and then sold, it results in the transfer of such copyrighted work, but the rights of ownership still remains with the original author. Such transfer attracts a rate mentioned in the HSN code for different kinds of products.

For Example : If ‘Patanjali’ Sell their Trademark “PATANJALI” to ‘Dabur’, then such transfer shall attract a GST rate of 12% on the total consideration or transaction value whereas, GST rate applicable on goods bearing the mark  “PATANJALI” like herbal toothpaste, soaps, shampoos etc. is different in case of different products as per HSN code.

SALE OF ‘BRANDED’ AND ‘UNBRANDED’ GOODS

Various products like eatables, raw grains like barely, natural honey , paneer, cereals like oats, pulses etc. if sold loosely without bearing any brand name and unpackaged, do not attract any GST as they are exempted under the exemption notification. However, when these commodities are put in packaged containers and under the seal of a registered brand name, these are liable to GST.

But, on a close reading of this principle, one might raise the question  :

“WHAT IF THE BRAND IS UNREGISTERED?

Well, as per the Notification 8 issued by the CBIC, The phrase “registered brand name” means brand name or trade name, that is to say, a name or a mark, such as symbol, monogram, label, signature or invented word or writing which is used in relation to such specified goods for the purpose of indicating, or so as to indicate a connection in the course of trade between such specified goods and some person using such name or mark with or without any indication of the identity of that person, and which is registered under the Trade Marks Act, 1999. 9

Hence, in the light of above stated explanation, one might find ways to avoid his/her Trademark registration as selling under an unregistered trademark would do them more good than bad, because that will not subject them to any GST liability. It is only when they get their Trademark registered under the said Act, that such GST liability shall arise. This can become one of the big loopholes under GST regime and will definitely affect the Intellectual Property industry.

As per Section 9(1) of CGST Act 2017, GST has to be deposited by the person supplying the goods and/or services. However, Section 9(3) of the CGST Act, 2017 embodies the principle of Reverse Charge Mechanism (RCM) according to which, the tax liability has to be discharged not by the supplier of goods and/or services, but by the recipient of such services. The said sub-section gives Government the power on recommendations of the GST council, to specify certain categories of supply of goods or services or both on which, RCM shall be applicable.

Therefore, the Government came out with the notification10, Entry no. 9 of which states that if the services are supplied by an author, music composer, photographer, artists or like persons, by way of transferring or permitting the use or enjoyment of a copyright covered under clause (a) of subsection (1) of section 13 of the copyright act 1957, which relates to original literary, dramatic, musical or artistic work to a publisher, music company or producer or like person/co., then such publisher, music company or producer or like person/co will be the one liable to discharge the tax liability on receipt of such services.