This year, the CPC Central Committee, the State Council and the People’s Bank of China (PBC) have continued their efforts to open up the banking sector. The Report of the Nineteenth National Congress provides an explicit requirement to “make new ground in pursuing opening up on all fronts, significantly ease market access, and further open the service sector”. It was stressed at the National Financial Work Conference that further opening up of the financial industry is a significant part of China’s overall opening-up policy. The Notice of the State Council on Several Measures for Promoting Foreign Investment Growth (Guo Fa [2017] No. 39) rolled out 22 measures to reduce access restrictions on foreign capital and four other areas. This includes continuing to open the banking, securities and insurance industries, and clarifying the timetable and road map for this to occur. In addition, at the Thirty-Sixth Meeting of the International Monetary and Financial Committee, PBC Governor Zhou Xiaochuan expressed China’s commitment to further open up the financial industry. It was also stated at the Central Economic Work Conference (18-20 December 2017) that China will further open the financial sector, significantly ease market access, implement pre-establishment of national treatment plus a negative list across the board, continue to shorten the negative list, and speed up the improvement of laws governing foreign investment.

Financial cooperation between China and Britain has now reached a new peak.

The Sino-British Dialogue states that the two sides will continue to support each other to expand their banks in each other’s regions and that both will encourage their banks to further promote the “Belt and Road” Initiative. Thanks to this ninth Sino-British Dialogue, consensus about how the parties will cooperate in the banking industry has been reached. Specific items are listed in the table below: 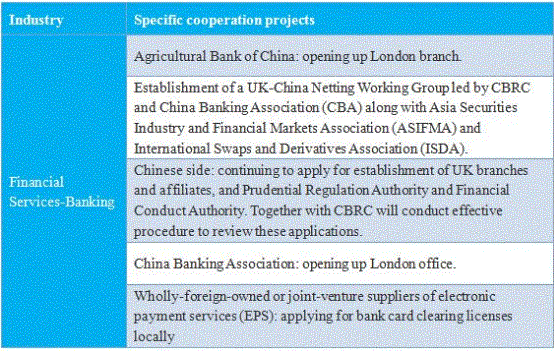 We noticed that at this Sino-British Dialogue, China agreed to:

“eliminate the 20 percent ceiling on ownership of a Chinese commercial bank or an asset management company by a single foreign investor and the 25 percent cap on total foreign ownership of such companies to implement equal treatment of domestic and foreign investors investing in the equity of the banking sector”.

Mirroring the consensus reached between China and the U.S. in Beijing, this statement reflects China’s fundamental attitude towards foreign capital access. This is very favorable to foreign investors. However, revision of existing laws and regulations is required before this policy can be implemented.

CBRC requires that the same investor, its affiliates or persons acting in concert shall not purchase shares of more than two commercial banks (as a major shareholder) or control more than one commercial bank. Whether a foreign-funded bank, having established a wholly-funded bank in China, is permitted to control a medium or small sized commercial bank remains to be clarified by regulators. In domestic practice, this is a strict restriction in terms of Chinese-funded banks.

In regard to licences for non-banking financial institutions, this Sino-British Dialogue released a positive signal only for wholly-foreign-owned or joint-venture suppliers of electronic payment services applying for bank card clearing licenses locally. It remained silent about most sectors regulated by the central bank. Specifically, credit investigation, credit rating, third-party payment, and bank card clearing institutions under the administration of the central bank are open at different levels without any explicit restrictions on the proportion of foreign capital access. These sectors are not on the negative list in the Catalogue of Industries for Guiding Foreign Investment. They are not in the restricted or prohibited categories. , They should receive the same treatment as domestic investment. The central bank remains conservative towards payment services. The Administrative Measures of People’s Bank of China on Payment Services Provided by Non-financial Institutions ([2010] No.2) states that:

“The business scope of foreign-invested paying institutions, the qualifications and contribution ratio of overseas capital contributors shall be separately stipulated by the People’s Bank of China and reported to the State Council for approval.”

Yet that “separate stipulation” has still not been clarified. In practice, two foreign companies Edenred (China) Co., Ltd. and Shanghai Sodexo Pass Service Co., Ltd. have obtained third-party payment licenses. Their approved business scope is limited to prepaid card issuance and acceptance business not covering the most widely used network payment services. The regulations covering the bankcard clearing industry, provide that foreign investors may establish bankcard clearing institutions, but do not provide restrictions on the equity ratio held by foreign investors[2]. In payment and bankcard clearing, there is potential for further opening to foreign investors. It remains to be seen how much these sectors will be opened as a result of the Sino-British Dialogue.

China will continue its efforts long-term in attracting foreign investment into its banking industry by promoting the improvement of services. With the opening of China’s financial industry, cross-border cooperation and innovation will continue to increase.