Time for reform: Can Australia bring secured transaction law into the digital age?

Reforms to Australian secured transaction law is required to meet the demands of the modern and adaptive digital asset marketplace – but will Australia’s lawmakers get on board?

With the widespread proliferation of digital assets to date and the anticipated future growth of this asset class, international momentum is building around secured transaction law reform.

In July this year the American Law Institute and the United States Uniform Law Commission approved amendments to the Uniform Commercial Code aimed at ensuring that the taking of security over digital assets is better accommodated under US law and the England and Wales Law Commission published a consultation paper on the recognition, protection and law reform of digital assets, protecting the rights of users and maximising market potential, asking stakeholders to comment on the need for secured transaction law reform.

Having regard to such developments in the US and UK, the Australian Personal Property Securities Act 2009 (Cth) (PPSA) will require amendments to better support a marketplace where digital assets can operate as collateral for secured lending.

Previous reviews of the PPSA have borne few results. The comprehensive 2015 Whittaker Review1 made 385 recommendations to correct problems identified in the operation of the PPSA. To date, successive Australian Governments have chosen not to enact any of the proposed reforms beyond an amendment to reduce red tape and regulatory risks associated with registering short-term PPS leases.

However, amendments to the PPSA are only part of the solution leaving gaps in areas such as the taxation of digital assets, regulating and market licensing of digital asset trading, exchanges and mining, AML/CTF regulations, corporate law recognition of decentralised autonomous organisations and treatment of digital assets in insolvency.2

Given the prominence of cryptocurrencies, non-fungible tokens (NFTs) and other digital assets and the rate at which this emerging asset class has grown, questions have rightfully emerged from stakeholders, governments and regulators in Australia and abroad how one can effectively perfect a security interest in such assets under the relevant secured transactions law. In Australia, the applicable legislation is the PPSA.

The PPSA employs a comprehensive classification scheme by separating personal property into a number of collateral classes. It is important to determine how collateral, the subject of a security interest, is classified under the scheme to understand the formalities associated with ‘attachment’ and ‘perfection’ relevant to that collateral, the benefits and distinct rules that may apply to any specific collateral class and how best to accurately capture the collateral when registering a financing statement on the Personal Property Securities Register.

The PPSA which received royal assent in 2009 and came into force in 2011, takes as its starting point the personal property securities (PPS) model first implemented in the United States (US) and then adopted by Canada and New Zealand. Underpinning each of these PPS law regimes is a unitary approach founded on the philosophy of substance over form, with a ‘security interest’ being functionally defined as an interest in personal property that secures payment or performance of an obligation. Given the PPSA is modelled after the US equivalent, we should take note of the amendments being considered there.

Having regard to the prominence of digital assets, the Uniform Law Commission (ULC) and the American Law Institute (ALI) formed the Emerging Technologies Committee (ETC) in 2019 to review the US Uniform Commercial Code (UCC) and what amendments may be required to better accommodate emerging technology, including distributed ledger technology, cryptocurrency, NFTs and electronic money.3

Initial drafts of the amendments were produced by the ETC in July 2021 and discussed by the ALI Members Consultative Group (MCG) in October 2021. In January 2022, ALI approved Council Draft No. 1. The MCG met and discussed the latest draft in April 2022 and approved the changes in May 2022. The ULC approved the changes at its annual meeting in July 2022, the amendments, some of which relate to Article 9 (being the UCC article governing secured transactions), will now be offered for uniform enactment to each of the US state legislatures.4

Article 9 of the UCC provides that a security interest in ‘money’ can only be perfected by ‘possession’. Given cryptocurrency is not susceptible to possession, the amendments provide that a person has control of ‘electronic money’ (including cryptocurrency), when they obtain an exclusive benefit or have the ability to transfer control to a third party (i.e. has the ‘private key’ or some other mechanism by which to retain the benefits from the asset and prevent others from such benefits) and the electronic money is readily identifiable (i.e. with a number, key, account number etc.).

In addition, the ETC proposes various other amendments by creating a new Article 12 that governs the transfer – both outright and by way of security – of interests in intangible digital assets.

The paper asks for responses on whether non-possessory security interests (i.e. charges and mortgages) can be satisfactorily granted in respect of digital assets without the need for law reform and whether it is desirable to make provision for digital assets to be subject to possessory security interests (i.e. pledges and liens).

PPSA and the Need for Amendments

The Senate’s Select Committee on Australia as a Technology and Financial Centre, chaired by Senator Andrew Bragg, published a report in October 2021 noting that 25 per cent of Australians either currently hold or have previously held cryptocurrencies, making Australia one of the biggest adopters of cryptocurrencies on a per capita basis. The report goes on to acknowledge that the tremendous potential of blockchain technology and decentralised finance is becoming recognised by mainstream institutions and investors and the economic opportunities are significant if Australia can create a forward-leaning environment for new and emerging digital asset products.6

The Digital Law Association as part of its submission to the Senate’s Select Committee noted the following global economic opportunities associated with the digital asset economy:7 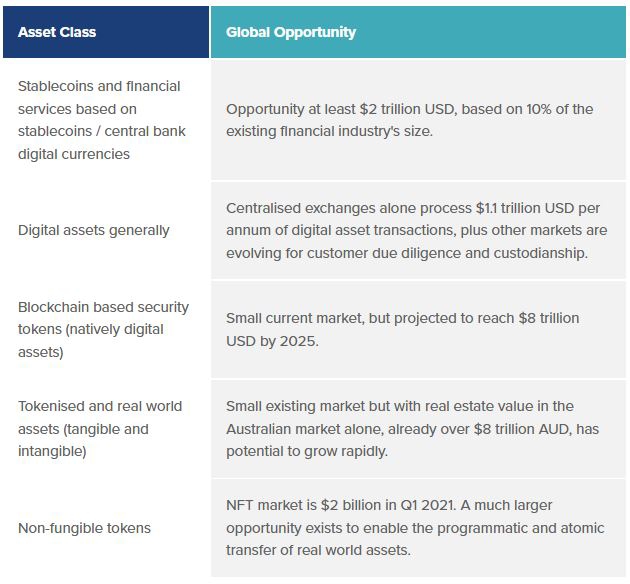 The significant global demand for digital assets requires legislators to consider what amendments are required to the PPSA to better support a marketplace where digital assets can best operate as collateral for secured lending.

Having regard to the above, it would be timely for Australia to either work with industry and experts to determine the necessary scope of amendments to allow the PPSA to better accommodate digital assets or appoint a review body to complete an analysis of the PPSA, comparable to that done by the ETC in the US and the Law Commission in the UK. This would enhance Australia’s potential to advance as a technology and financial centre.

The topic of the PPSA and its application to digital assets will be the subject of future briefings. If you would like to learn more about the issues in this briefing, please contact the author or your usual Herbert Smith Freehills contact