The European Patent Office (EPO) has long had a practice of requiring that the description of a patent application be amended into conformity with an allowed set of claims. Upcoming changes to the EPO Guidelines for Examination are expected to indicate that a stricter approach will be adopted and Examination Reports that reference this new approach are already being received on patent applications currently under examination at the EPO. Following a review of the expected changes, we shall consider the potential post-grant impact of amendments to the description in light of recent case law developments, particularly the introduction of the doctrine of infringement by equivalence in the UK.

Amendments to the description

Changes in practice at the EPO

Updated Guidelines are due to be published in March 2021, which are expected to include updated guidance on the approach of the EPO with regard to description amendments. Despite the Guidelines being due to be published in March 2021, examination reports received on patent applications undergoing examination at the EPO are already including new guidance on how the description should be amended into conformity with the allowed claims.

According to this guidance, embodiments not covered by the claims must be deleted, unless these embodiments can reasonably be considered to be useful for highlighting specific aspects of the amended subject-matter, or prominently marked as not being part of the invention. The new approach is based on existing case law (T 1808/06) but the EPO appears to be applying it in a stricter manner. It may be that the former practice of changing “invention” or “embodiment” to “disclosure” or “as described herein” respectively will no longer be considered acceptable under the new practice.

The extract below is taken from an Examination Report received recently and looks to be the standard text which will be used by the EPO: 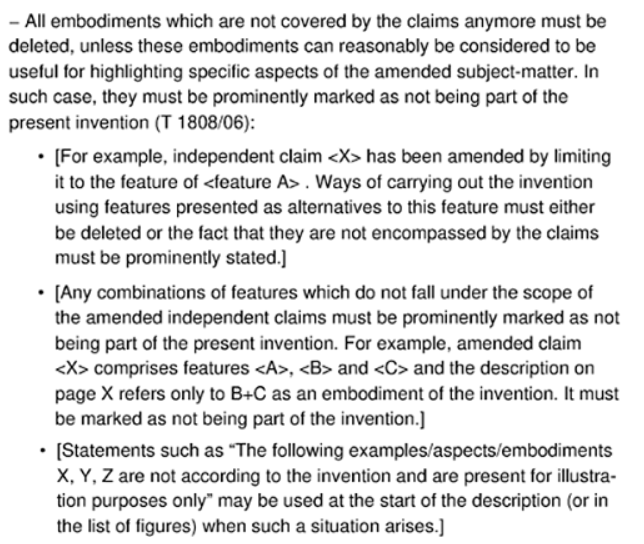 Considerations when adapting a description

How best to adapt a description into conformity with an allowed set of claims requires careful consideration. One particular consideration in the UK 1 is the introduction of a doctrine of equivalents, as established by the 2017 UK Supreme Court decision in Actavis v Eli Lilly 2 . For example, how best to balance the new EPO practice with regard to alternatives and combinations appearing in the description that are no longer covered by the amended claims and any potential reliance on the doctrine of equivalents.

In the Actavis judgment, Lord Neuberger provided guidance for establishing infringement in a case where there is no “literal” infringement 3 in the form of three reformulated “Improver questions”:

Our recent review of decisions involving Actavis issues suggests that Question 3 is the most litigated question, in terms of inter-party argument, but currently there are few cases where an alleged infringer succeeds on this point. In view of this question, it may be disadvantageous in some situations to state prominently that an embodiment is not encompassed by the claims. For example, this could be taken to indicate that “…strict compliance with the literal meaning of the relevant claim(s) of the patent was an essential requirement of the invention”. Therefore, in some situations, the deletion of such features from the description may be preferable as there is then no specific indication in the granted patent as to what is not considered to form part of the invention protected by the granted claims. Naturally, it will be important to consider cases individually but this is one point to consider, in particular, if a doctrine of equivalents argument may wished to be relied on in the future.

In other situations, it may not be straightforward to delete terms from the description. Complex situations could arise when a claim originally used a broader, functional term but then was amended to a more specific entity encompassed by the original term. Many instances of the broader, functional term are likely to appear in the specification and it may not be appropriate to delete them. It is as yet unclear if EPO Examiners will require such subject matter to be amended under the new approach but there may be the possibility of arguing that such passages of the description are important for the understanding of the claim.

The importance of consistency between the granted claims and the description and examples was recently highlighted in an appeal against a decision of the opposition division (T 1285/18). In the decision, the Board noted that there was clearly a discrepancy between the definition of the invention in the description and the claims and what was shown by the examples. In particular, the main request included a claim to “A water-absorbent resin having a treated surface, wherein a polyvalent metal atom is present on a surface…” and defining a specific extraction ratio of the polyvalent metal atom. The claim of the main request was not limited to a specific polyvalent metal atom whereas the comparative examples of the patent showed that when aluminum was employed as the polyvalent metal atom, the specified extraction ratio was not achieved. The Board noted that the patent contained no recognition of or explanation for the reason for the failure of the indicated comparative examples to meet the requirement of the extraction ratio and the claim of the main request was deemed to lack sufficiency of disclosure. Thus the form in which the description and examples of a patent take can have important implications post-grant.

In conclusion, how best to adapt a description into conformity with an allowed set of claims in view of the new practice at the EPO will require careful consideration as practice under the new rules develops. The impact of amendments on validity and any potential reliance on the doctrine of equivalents will need to be assessed as part of this process yet the law, at least in the UK, is currently developing following the relatively recent development of the doctrine of equivalents by the Actavis case.