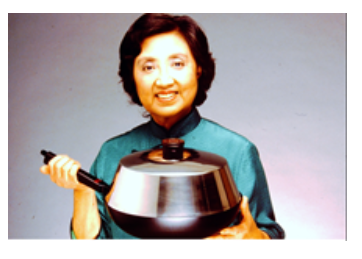 In the 1960s, this groundbreaking female chef, who wrote an influential cookbook teaching Americans how to prepare foreign cuisine, hosted her own cooking show on public television broadcast weekly from Cambridge, Massachusetts. No, it is not Julia Child. It is Joyce Chen, the inventor of the flat bottomed wok, the author of the popular Joyce Chen Cook Book and the host of the television show Joyce Chen Cooks. In recognition of Asian American Pacific Islander Heritage Month, we celebrate Chen and her ingenuity and entrepreneurship.

Credited with popularizing northern-style Chinese cuisine in the United States, Chen was born in China in 1917 and later emigrated with her family to Cambridge, Massachusetts in 1949 during the Communist revolution. Having learned the art of traditional Chinese cooking from her family chef in Beijing, Chen first became interested in professional cooking when her egg rolls—at the time, rare and exotic—sold out in an hour at the local bake sale.

Chen opened her first restaurant in Cambridge in 1958 and soon after began teaching Chinese cooking at local adult education programs. She published her first cook book, Joyce Chen Cook Book, in 1962 and began her own cooking show, Joyce Chen Cooks, in 1967, filmed in the same studio as Julia Child’s popular show The French Chef. Child herself frequently attended Chen’s restaurant and was an admirer of Chen’s cooking. 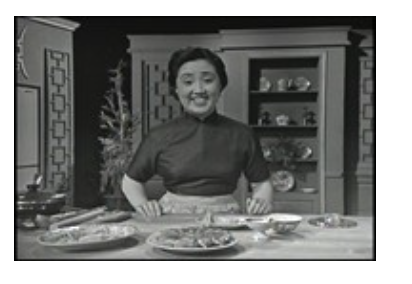 Chen launched Joyce Chen Products in 1971, offering high quality Chinese cooking utensils. One such product was a flat-bottomed wok with a handle, also dubbed a “Peking Wok,” for which Chen obtained U.S. Design Patent No. 221,397. 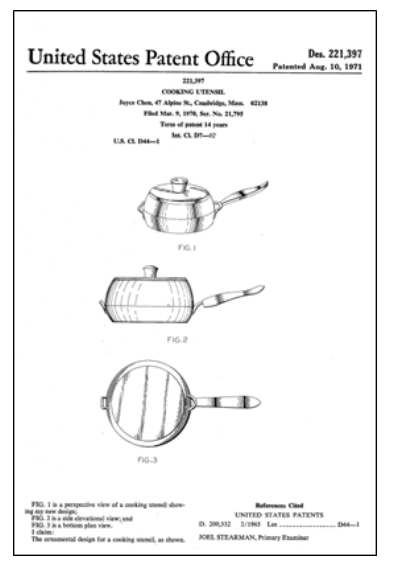 Chen designed the wok with a flat bottom to accommodate the flat burners on most American ranges. In China, most ranges had burners with circular holes in the center through which the round bottom of a wok would fit perfectly.

Chen opened several more restaurants before her death in 1994. Posthumously, Chen was recognized by the city of Cambridge with a “Festival of Dumplings,” honoring what would have been her 95th birthday. In 1998, Chen was inducted into the James Beard Hall of Fame.

Chen’s portrait appeared on a limited-edition U.S. Postal Service stamp in 2014, as part of a tribute series to American chefs. 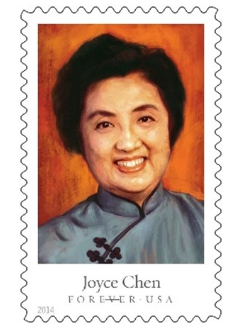 According to the Postal Service, “Joyce Chen is one of America's most well-known promoters of Chinese food. From her landmark restaurant in the Boston area to her cookbooks and trailblazing PBS television show, Chen invited newcomers to sample unfamiliar dishes in ways that firmly established Chinese cuisine in the United States.”