Welcome back to the second week of the 116th Congress, where the stalemate between Speaker Nancy Pelosi and President Donald Trump seems to grow with every passing day as the government remains closed. Several questions remain as the tax season looms, and the two most notable are when the IRS staff comes back and if Americans will get their tax returns on time. Republicans think IRS workers should return to work to process American’s tax returns, but Democrats have been silent on it.

With technical corrections looming and still unanswered questions on 2017 law, tax reform is a focus of the discussion. Outside of the Beltway, the effects are starting to be felt. The National Movers Study, published after the new year, showed where American’s are moving to and from. SALT (state and local tax) was a contentious provision during the reform debate and the new cap on deductions contributes to more Americans abandoning high tax states and localities. From the study, Nevada, Arizona, and Oregon showed high rates of inbound movers, while New York, New Jersey and Connecticut (which have high state and local taxes) showed high rates of outbound movers. This movement continues a trend that began years ago. 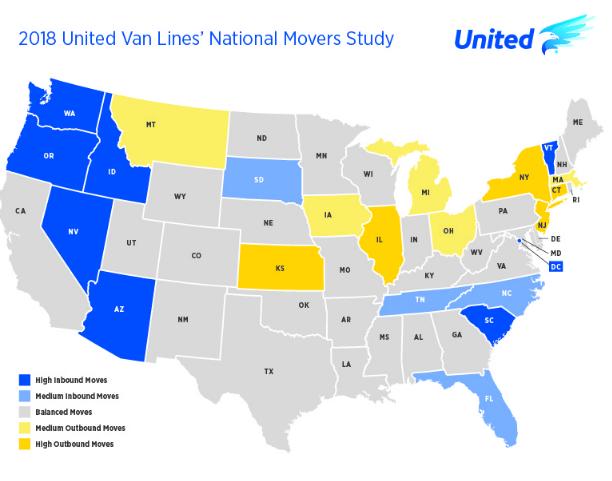 Who’s the New Guy? Last week, the House Democratic Steering and Policy Committee formally announced 11 new lawmakers who will join the House Ways and Means Committee for the 116th Congress. Among the new Ways and Means members, six of 11 of the new members will represent the Congressional Progressive Caucus (CPC), resulting from a deal between House Speaker Nancy Pelosi (D-CA) and the CPC to provide the caucus a 40-percent membership stake in many of this Congress’ major committees. CPC members now on Ways and Means include:

The other additions include:

Meanwhile, the House Republican Steering Committee named three new members of their own to the Ways and Means Committee earlier this afternoon. The new members—Reps. Drew Ferguson (GA-03), Jodey Arrington (TX-19), and Ron Estes (KS-04)—will round out the committee membership for the 116th Congress.

Pension Tension. During the first week, House Ways & Means Chairman Richard Neal (D-MA) reintroduced bipartisan legislation to tackle one of his top priorities: the retirement savings “crisis” impacting retirees across the country. On Wednesday, Neal introduced the Rehabilitation for Multiemployer Pensions Act, a bill seeking to ensure that retirees, whose multiemployer pension plans have been underfunded, retain the benefits they have earned. Neal, joined by other Democrats and five House Republicans, proposes to solve the problem by establishing a new office within the Treasury Department, the Pension Rehabilitation Administration, to oversee the Pension Rehabilitation Trust Fund. The new office would be responsible for financing loans to multiemployer pension plans labeled “critical and declining.” To carry out the duties of the office, the president would appoint a director who would serve a term of five years.

What’s Neal Dealing? Retirement savings has been among Chairman Neal’s top priorities. As chairman, he will now hold an influential post to pursue his own legislative agenda and that of House Democrats. Alongside retirement savings, Neal intends to prioritize infrastructure, focusing specifically on funding offsets for a potential comprehensive package. Ways and Means anticipates calling a number of witnesses to testify on the issue, with a special emphasis on helping states and leveraging cheaper borrowing costs. His agenda will include heavy focus on tax extenders and IRS administration, alongside minimum wage and a comprehensive infrastructure package.

Grassley Outlines Agenda. With Chairman Chuck Grassley (R-IA) reclaiming his perch atop the powerful Senate Finance Committee, he will want to expand upon the success of the Tax Cuts and Jobs Act. Late last year, he indicated he will conduct oversight of nonprofit organizations to ensure they are complying with their tax-exempt status. Last week, Grassley outlined his agenda for the committee and indicated his intent to focus on increasing tax relief, protecting and enhancing retirement security, rigorous oversight of the IRS, and reforms that encourage American competitiveness in the global economy. On the provisions included in the Tax Cuts and Jobs Act, Grassley will seek to make some of the expiring tax cuts permanent, support tax incentives for renewable and alternative energy sources and explore additional tax cuts proposed by the Trump administration. On health care issues, Grassley will work to enhance health savings accounts, health reimbursement arrangements and flexible spending accounts.

Areas of potential bipartisan agreement include tax relief for the middle class in exchange for an increase in the corporate tax rate. Some have suggested that if the two parties pursue this, they may ultimately settle on a corporate tax rate increase from 21 to 28 percent. If lawmakers push an infrastructure package, Senate Finance and Ways and Means will be vital in determining how it will be financed.

IRS, Treasury Funding Bill Clears House. The House passed the Financial Services and General Government (FSGG) Appropriations Act (H.R. 264) on Wednesday along a 240-188 vote, sending a likely dead-in-the-water Treasury Department and IRS funding package to the Senate in the midst of the heated government shutdown. The legislation, nearly identical to the conferenced FSGG bill from last year, would notably increase federal civilian wages by 1.9 percent and provide $11.3 billion to the IRS for FY 2019. H.R. 264 joins three other independent legislative packages that moved through the House this week in an effort to fund several shutdown government agencies. However, both President Trump and congressional leadership remains entrenched in divisive and partisan negotiations over border wall funding. While eight Republicans voted in favor of H.R. 264, none of the bills funding the government are likely to be taken up in the Senate or exceed the necessary 60-vote threshold to reach the president’s desk.

Can You Dig-it(al)? While little happened last week regarding the ongoing European efforts for a digital revenue tax – outlined in last week’s Taxation & Representation – both Austria and Chile showed interest in developing their own online sales tax. On Thursday, Chilean Finance Minister Felipe Larrain proposed a 19 percent tax on the digital operations of top ecommerce companies within the country. The tax would specifically target top American firms including Amazon, Netflix, Spotify, and Uber, and has received the endorsement from Chile’s Chamber of Commerce and the OECD. Austria, meanwhile, proposed a similar digital levy this week to offset portions of the roughly $5 billion deficit resulting from the country’s recently-introduced budget. The three percent tax would likewise target top American tech firms operating in the country, and would be part and parcel to a broader tax overhaul undertaken by Austria to be formalized in the coming months.

So We’re Getting Paid, Right? House and Senate lawmakers passed legislation on a nearly unanimous basis late last week to guarantee wages and benefits for all federal workers furloughed or working without pay as a result of the government shutdown. The Government Employee Fair Treatment Act (S. 24) guarantees back pay and any previously-scheduled paid leave for all federal workers once the shutdown concludes. The legislation unanimously passed the Senate on Thursday, while the House passed the bill in a 411-7 vote last Friday. President Trump has already indicated a willingness to sign the legislation if passed by Congress.

Grassley, Unions at Odds. Prior to the passage of the back pay legislation, both Capitol Hill and federal employee unions had an active week gearing up for worst-case scenarios as over 800,000 government workers prepared to miss their checks on Friday. On Wednesday, Chairman Grassley (R-IA) voiced support for a Trump administration plan to mandate thousands of furloughed IRS employees to return to work for the upcoming tax filing season. At a press briefing in front of reporters, Grassley stressed that there are “already 412,000 government employees working” without pay and that IRS workers “ought to work.”

The statement comes with the backdrop of a second lawsuit this week against the Trump administration for forcing employees to work without pay during the shutdown. On Monday, the National Treasury Employees Union (NTEU) joined the American Federation of Government Employees (AFGE) in filing lawsuits citing the illegality of forcing federal employees to work, “some of the most dangerous jobs in the federal government,” without any guarantee of payment. Collectively, both NTEU and AFGE represent over 850,000 federal workers across every federal agency.