In this update we discuss the key legal and practical changes faced by UK/EU suppliers competing for regulated contracts after the end of the Brexit transition period. The UK Government has already published extensive plans to overhaul the UK regime, but those changes are unlikely to be effective for many months to come - so what has changed for suppliers from 1 January 2021?

In short, for above-threshold regulated procurement, there is currently very little practical change in terms of processes and procedures. However, suppliers do now need to consider three key questions when assessing which post-Brexit rules apply:

1. Is the procurement in the UK or an EU member state?

UK suppliers no longer have an automatic right to compete for EU-wide tenders (and vice versa). Instead, this will depend on the contract value, whether it is a "covered procurement" under the WTO Government Procurement Agreement ("GPA") as enhanced by the new EU-UK Trade and Cooperation Agreement ("TCA") and, if a UK supplier, whether it has an EU establishment.

If the UK procurement was commenced before the end of the transition period, the EU regime will continue to apply until the contract is awarded. This is particularly significant for framework agreements, as contracts called off after 1 January 2021 will remain governed by the EU regime until the original framework expires.

If the procurement is a regulated above-threshold tender, it appears to be largely business as usual, subject to some practical changes: the TCA broadly preserves UK suppliers' rights and remedies when bidding for EU-wide tenders (and vice versa). However, UK contracting authorities can exercise more discretion for below-threshold procurement where, most importantly, the remedies available to all suppliers are weaker.

We've created a `Quick Guide to Post-Brexit Procurement' at the end of this update to help identify which rules apply to EU/UK procurement procedures from 1 January 2020.

Post-Brexit, the GPA governs access to regulated EU-wide contracts by UK suppliers (and vice versa). The GPA provides the basic framework for access to national procurement by suppliers based in other GPA States. The EU is a GPA member and the EU procurement regime is considered to comply with the minimum standards set out in the GPA.

The UK is no longer directly bound by the EU regime. However, as the UK has joined the GPA in its own right, it is bound to the minimum standards of the GPA from 1 January 2021. The UK regime mainly set out in the Public Contracts Regulations (the "PCRs") directly transposed the EU regime prior to Brexit, so it is already GPA-compliant and no immediate changes are required.

However, only certain public contracts fall within the GPA, which expressly excludes/includes certain contracts for works, services, concession and public utilities tendered by the public bodies of the GPA states. A contract that is expressly included within the Schedules to the GPA is known as a "covered procurement". The UK has adopted the lists and thresholds currently set out in the EU Schedules.

Outside these areas, the UK can prescribe its own rules and thresholds. However, for now, the existing scope of and thresholds set out in the PCRs and other UK regulations governing utilities, defence and concessions contracts all remain unchanged, since the UK has retained this law pending the overhaul of public procurement law.

The UK's new freedom flowing from the GPA is, however, subject to the terms of the TCA. In particular, networks and supplies to networks for gas/heat utilities are added to the GPA Schedules, and the TCA also extends the GPA regime to privately run utilities, which essentially replicates the pre-Brexit coverage of utilities in the UK Utilities Contracts Regulations 2016. However, the following services are included/excluded:

Subject to some limited exceptions for ongoing procurement, UK contracting authorities will no longer be obliged to publish above-threshold opportunities in the Official Journal using the EU electronic portal, Tenders Electronic Daily or `TED'. Instead, the UK Government has introduced a new standalone UK e-notification service `Find a Tender' which will (from 1 January 2021) publish those notices that were previously published on TED .2

However, tenders commenced before 11pm on 31 December 2020 will continue under the rules applicable before the end of the transition period (where publication on TED may still be required). Moreover, framework agreements concluded prior to the end of the transition period will continue to operate under those rules, including any call-off contracts issued after 1 January 2021.

UK suppliers should therefore be alive to opportunities for challenge under the prior rules, and continue to monitor the EU platform, as the UK Government has confirmed that Find a Tender will not import existing publications from TED.3 Currently, contracting authorities may indicate on TED whether a procurement is a covered procurement for the purposes of the GPA: it remains to be seen whether this will be extended to additional procurement covered as a result of the TCA.

UK suppliers will no longer be able to invoke EU treaty rights to supply goods and services across the 27 EU member states. The GPA does not confer such directly effective rights and, more fundamentally, does not apply to below-threshold procurement.

However, the TCA expressly provides for rules on non-discrimination against UK suppliers "in like situations" for non-covered procurement where the supplier is established within the EU, and vice-versa. Accordingly, UK suppliers that are also established in an EU Member State may be able to continue to rely on EU/national rules and continue competing even for below-threshold opportunities.

(b) Reservation of tenders to suppliers based on location

A significant change to the UK regime is the ability for contracting authorities to reserve belowthreshold procurement to certain suppliers. The UK Government has published PPN 11/20 to provide further guidance: in summary, contracting authorities can limit participation to suppliers located within a defined geographical area and/or limit participation to SMEs and other voluntary organisations only. These boundaries can be drawn at a single county level, though (confusingly) contracting authorities are not permitted to define boundaries by the four UK countries which would segment the `UK Internal Market' (see remedies below).

This is not new territory for the UK: last year we commented on the introduction of a mandatory new `social value model' with a minimum 10% weighting applicable from 1 January 2021 (see our commentary here). Within this model, the UK regime already affords credit to prospective suppliers that can demonstrate their ability to satisfy local social objectives, e.g. supporting local employment.

Similar to the loss of access rights discussed above, suppliers (whether UK or EU) will no longer be able to rely on EU law against UK contracting authorities for remedies in respect of below-threshold procurement. For example, the new powers to reserve procurement to suppliers by location might have been challenged under EU general principles for segmentation of the EU Internal Market.

Whilst the GPA also seeks to uphold broadly similar non-discrimination standards (in that above threshold procurements cannot be reserved to suppliers based on location), it does not apply at all to below-threshold procurement. Suppliers may still be able to make arguments based on UK procurement principles retained from the EU regime; however, clearly parties can no longer invoke EU treaty rights directly. Suppliers will therefore be limited to challenging on the basis of the rules under the PCRs (and other regulations), alongside UK rules and guidance on obtaining best value and consultation duties, e.g. under the Local Government Act 1999 and the Best Value Statutory Guidance.

However, given Brexit, two new routes now exist that may develop into useful challenge opportunities:

The UK Government is consulting on an overhaul to the UK regime, but these changes will likely not be effective for many months to come. Until then, most of the procedural rules governing UK procurement remain as they were before the end of the transition period; however, the rules on access to EU/UK opportunities are now underpinned by the GPA/TCA, rather than the EU regime, and notices for UK opportunities will now be published on a UK (rather than EU) platform. Going forward, UK suppliers will need to consider these three key questions:

1. Is the procurement in the UK or an EU member state?

2. If a UK procurement, was the procurement commenced before the end of the transition period (i.e. 11pm, 31 December 2020)?

The answers to these questions determine which procurement rules (and remedies) will apply. Ultimately, UK contracting authorities must still conduct procurement under the same pre-Brexit principles of transparency, equal treatment and (for suppliers from GPA member states in abovethreshold procurement) non-discrimination. However, without an EU-law underpinning, challenging decisions in respect of wholly UK and below-threshold procurement will be significantly harder. 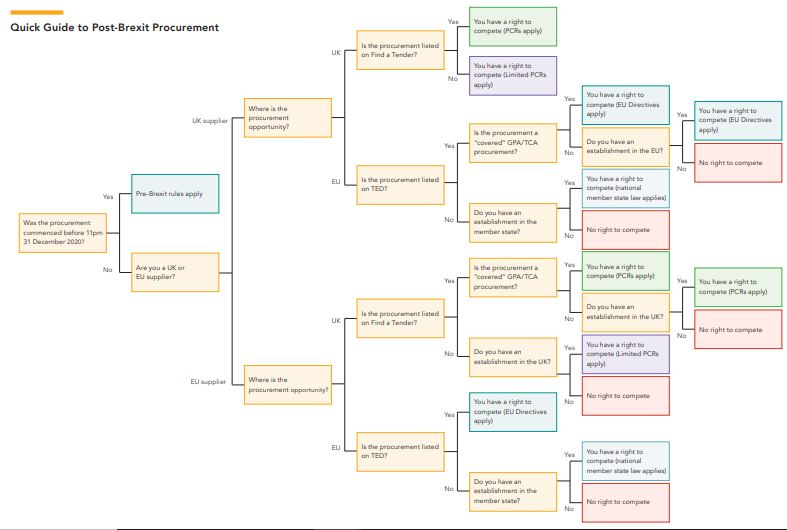