Last week, via a memo endorsement, Judge Koeltl granted the Democratic National Committee’s motion to serve Wikileaks by Twitter in the DNC’s case over the 2016 election hacks (see our coverage here).

The DNC argued that “[w]hile WikiLeaks’ physical presence is difficult to discern, it has a robust online presence, including an active presence on Twitter, using the handle @WikiLeaks.” From that account, Wikileaks in fact had acknowledged reading the DNC’s complaint. As the DNC argued in its motion, “From April 20 to April 22, WikiLeaks tweeted about the lawsuit at least six times, in one instance including a screenshot of part of the complaint, and in three instances directing followers to analyses of the complaint.”

On Friday, as Judge Koeltl authorized, the DNC served the initiating documents via the following tweet : 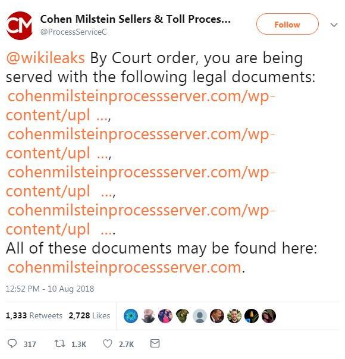 For another case involving social media service of process, see this post from five years ago in which Judge Engelmayer denied a motion to serve Indian telemarketers via Facebook.