On Nov. 11, 2020, the European Data Protection Board (EDPB) published eagerly anticipated guidance in the wake of the July 2020 European Court of Justice’s (ECJ) decision in Schrems II, outlining a process for ensuring data protections in compliance with the EU’s General Data Protection Regulation (GDPR) for EU-resident personal data that is transferred internationally (full text available here) (EDPB Guidance). The guidance outlines which steps companies should take to ensure that this data receives the same level of protection guaranteed within the EU when it is sent to third countries, the driving concern that led the European Court of Justice to invalidate the U.S.-EU Privacy Shield framework for international data transfer in Schrems II. It requires importers and exporters of the data to play an active role in ensuring this protection and to demonstrate the efforts they took. In conjunction with this guidance, the EDPB issued European Essential Guarantees Recommendations (EDPB Recommendations), which further clarify some of the steps companies should take, for instance how to assess the law or practice of the third country (full text available here).

The next day, on Nov. 12, 2020, the European Commission (EC) proposed a draft decision (EC Draft) updating the available Standard Contractual Clauses (SCCs), which are a primary mechanism recognized by the GDPR to appropriately safeguard EU personal data transferred to third countries (full text available for download here). Crucially, if the decision is adopted and new SCCs are effective, companies will have a 12-month period in which to phase out and replace all existing SCCs. The draft decision provides an Annex with a draft set of new SCCs (available for download here), which include SCCs for multiple data transfer scenarios: processor-to-controller and processor-to-processor, among the primary two. They would plug a significant gap in the data transfer system left following the Schrems II decision. The draft decision is in its comment period until Dec. 10, 2020.

In these newly issued documents, both the EDPB and the EC provide data controllers with post-Schrems II guidance, but there is an interesting divergence in their approaches that is worth noting, namely what weight, if any, should be given to “subjective factors” and to the practical likelihood of government access.

The EDPB Guidance is based on the key principle of accountability in data transfers, which requires exporters and importers of data to play an active role in protecting the data and being able to demonstrate these efforts. The EDPB Guidance thus outlines a six-step approach to ensuring that this accountability is met, particularly in the absence of the Privacy Shield that the Schrems II decision invalidated. These six steps are:

1. “Know Your Transfers” First, a company must know where the personal data is being transferred to, in order to “ensure that it is afforded an essentially equivalent level of protection wherever it is processed.” Note that this includes “onward transfers,” meaning ones where the processors outside the European Economic Area (EEA) transfer the personal data you entrusted to them to a sub-processor in another third country. “[R]emote access from a third country (for example in support situations) and/or storage in a cloud situated outside the EEA, is also considered to be a transfer.”

2. “Verify the Transfer Tool your Transfer Relies On, amongst those listed under Chapter V GDPR” The U.S. is not recognized as providing “adequate” protection according to the EC. Thus, in transferring EU data to the U.S., a company must rely on an Article 46 GDPR transfer tool.

The main types of Article 46 GDPR transfer tools are:

For occasional and nonrepetitive transfers, derogations under Article 49 may apply (under restrictive interpretation).

3. “Assess if there is anything in the law or practice of the third country that may impinge on the effectiveness of the appropriate safeguards of the transfer tools you are relying on”

Here, a company must evaluate the legislation of the third country that is relevant to the particular transfer tool being used. The data importer has a key role to play in this assessment and should provide the data exporter with relevant sources and information. The EDPB Recommendations expand on factors to consider, including that:

If the company’s assessment in step 3 reveals that the third-country legislation impacts the effectiveness of the Article 46 GDPR transfer tool it is relying on, supplementary measures must be adopted.

The EDPB Guidance provides a list of factors to consider in choosing the most effective supplementary measures: 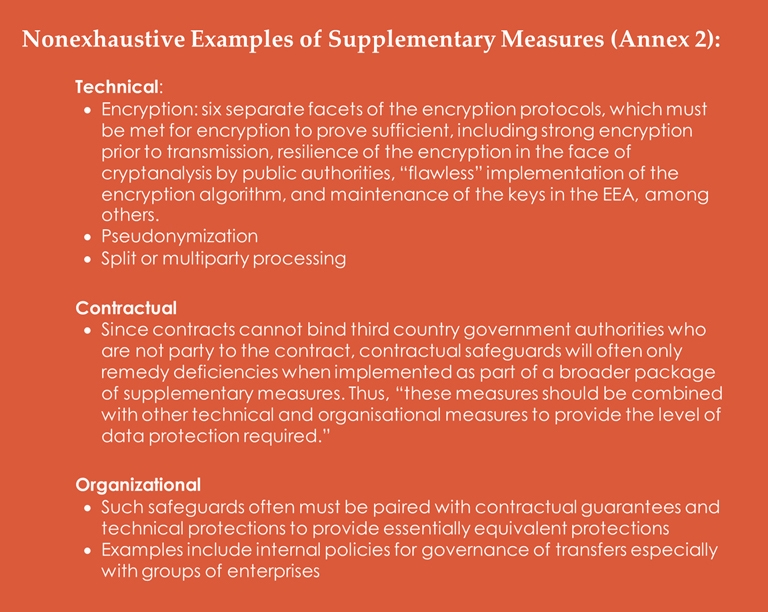 5. “Take any Formal Procedural Steps”: These procedural steps may depend on the transfer tool the company is using. The Guidance noted:

6. “Re-evaluate at appropriate intervals”: Companies must monitor if there have been or will be any developments that may affect the transfer tool they use.

If the draft decision is adopted, companies will have 12 months to implement its changes, including adopting and/or replacing the updated Standard Contractual Clauses. The following steps would be important:

1. Companies Must Replace Old SCCs with New Draft Ones Provided in the Annex:

The Annex provides a list of acceptable SCCs that will meet GDPR requirements, and companies will need to phase out and replace any old SCCs with these (Annex available for download here). Permissible SCCs listed in the Annex include a range of features like data protection safeguards, rights of data subjects, and technical and organizational data security measures, among others.

3. More than Two Parties can Adhere or Accede to a Single Set of Contractual Clauses:

This change helpfully diminishes the number of separate contracts companies must sign when onboarding new vendors or service providers, which is currently a burdensome task.

4. Potential shift in approach from a territory-based to a jurisdiction-based conception of data transfers, which may need further clarification:

At least one scholar points out the ambiguity in the draft decision, which may indicate in certain sections “that data transfer mechanisms may not be needed when personal data is transferred to a company outside of the EU that is already subject to the GDPR under Article 3(2).”[1]

Interplay and Some Tension Between EDPB Guidance and EC Draft Decision

The two documents have the same goal of providing further clarification in light of the summer decision by the ECJ in Schrems II. There are also some similarities between the two. For instance, the EC Draft decision includes placeholders to reference the EDPB Recommendations on supplementary measures. Further, the EC Draft decision and Annex directly incorporate some of the supplementary safeguards mentioned by the EDPB. However, there is a key tension worth noting: what weight to give to “subjective factors” and the likelihood of government access.

Though both documents provide factors for a company to consider when evaluating whether local law allows it to comply with its obligations to protect the data, the factors differ. The EC Draft decision appears to allow data importers to consider the practical likelihood of government access by evaluating “relevant practical experience indicating the existence or absence of prior instances of requests for disclosure from public authorities received by the data importer for the type of data transferred.” On the other hand, the EDPB warned data importers away from “subjective factors,” including “the likelihood of public authorities’ access to your data in a manner not in line with EU standards.” Both documents do note that all “applicable” laws must be evaluated.

Takeaways From the EDPB Guidance and EC Draft Decision:

In response to this EDPB Guidance and EC Draft decision, companies should:

After the uncertainty following this summer’s Schrems II decision, the EDPB and EC draft SCCs provide some clarity, but companies will also take time to fully assess their data flows, their transfer justifications and how best to implement new SCCs in a GDPR-compliant manner.