On September 16, 2019, the Intermediate People's Court of Nanjing (the "Nanjing Intermediate Court") issued the first-instance judgement on the disputes between plaintiff Huawei and defendant Conversant, setting the FRAND terms in Chinese market. Meanwhile, the Conversant v Huawei and ZTE appeals is being considered by the UK Supreme Court over whether the UK court has jurisdiction to hear Conversant's claim for setting the global FRAND rates. Undoubtedly, the prior Nanjing judgement will impose some impact on the proceedings in London and would provide a fuller picture of the legal disputes between the two parties.

Before the Chinese proceedings, Conversant, a non-practicing entity (NPE) which acquired a patent portfolio including the SEPs in disputes from Nokia, sued Huawei and ZTE at the High Court of Justice in London (the "UK High Court") on July 24, 2017. Conversant claimed that the two defendants had infringed its four UK patents and requested the court to determine the global FRAND rates for its multinational patent portfolio. With Conversant asserting eleven Chinese patents in late 2017, Huawei and ZTE initialed the administrative proceedings to invalidate all these patents. In January 2018, Huawei brought a lawsuit before Nanjing Intermediate Court against Conversant, applying for non-infringement declaration for 3 SEPs and determination of FRAND terms for all SEPs in Chinese market. In the same month, ZTE sued Conversant before Shenzhen Intermediate Court, requesting the court to set the FRAND terms for all SEPs Conversant held in Chinese market. Conversant only challenged the jurisdiction of Shenzhen Intermediate Court over the disputes, but it was rejected by Shenzhen Intermediate Court. Now, The Supreme People's Court is hearing the appeal of jurisdiction by Conversant.

For the proceedings in Nanjing, the court considered Huawei's first claim, a non-infringement declaration, unnecessary because these patents (Patents No. ZL 00819208.1, No. ZL 200580038621.8 and No. ZL 200680014086.7) have all been declared invalid. Huawei's second claim is requesting the court to set FRAND terms in respect of all Chinese SEPs. In total, Conversant holds 15 SEPs in China, in which 11 SEPs (in 10 families) were held by Conversant before Huawei filing the lawsuit and another 4 SEPs (in 4 families) were transferred to Conversant during the proceeding and then added into the trial. Considering that 8 of the these SEPs have already been declared invalid in prior administrative proceedings, the court focused on the remaining 7 SEPs. After analysis, the court held that only one patent is essential to 4G technologies under relevant 3GPP standards. The details about the validity and essentiality of the 15 Chinese SEPs held by Conversant are showed in the following table：

Table 1. The validity and essentiality of Conversant's patents in suit 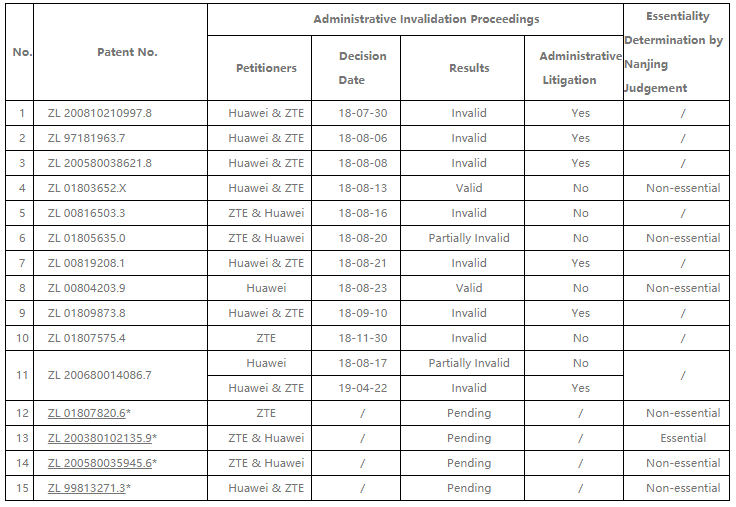 * The last four patents were transferred to Conversant in 2019.

The calculation of FRAND royalty rates was the center of the disputes in this trial. The court adopted the top-down approach proposed by Huawei and set the calculation formula for Chinese SEPs FRAND rates: Chinese royalty for a single patent family = accumulative rates of the standard in a particular industry in China × the contribution ratio of that single patent family. The court decided that Huawei only needed to pay the SEP royalty for the 4G mobile terminal products for one patent (ZL200380102135.9), and the precise rates proposed by Conversant and adopted by the court could be found in Table 2:

Table 2. Comparison of the rates proposed by Conversant and set by Nanjing Intermediate Court

There is a close relationship between the Nanjing judgement and the UK proceedings since Conversant was seeking a global FRAND royalty rate for its global patent portfolio from the UK court, including the SEPs already decided in the Nanjing judgment. Back to the proceedings in London, both Huawei and ZTE challenge the UK High Court's jurisdiction to determine the global FRAND rate, but the court rejected the challenge on April 16, 2018. Huawei and ZTE appealed the decision, but the Court of Appeal dismissed the appeal on January 30, 2019. Then the two companies appealed again to the UK Supreme Court and are now awaiting the final jurisdiction decision after a four-day hearing on 21 - 24 October 2019.