The tightening of foreign investment restrictions around the world has been recurring theme in recent monitors – and the economic fallout from COVID-19 has given governments further reason to scrutinise cross-border deals.

FDI interventions hit an all-time high in 2020, with G20 governments using their powers almost weekly. The situation is particularly fast-moving in Europe where the EU and member states have introduced a host of new measures over the past 12 months. The EU’s FDI Screening Regulation covers investments in a range of critical infrastructure, critical technology, critical inputs, sensitive data and media, and contains no specific trigger threshold (leaving member states free to review almost any investment by a non-EU entity). This, coupled with the fact that many countries now have harsher sanctions at their disposal and can share information with each other and the Commission about FDI notifications and investigations in their jurisdiction, will make Europe a more complicated environment for foreign investors in the year ahead. The US, too, continues to have strategic technologies and sensitive data in its sights. More generally, while concerns about Chinese investment have been a big impetus for the expansion of FDI regimes, these frameworks are almost always neutral on their face and in practice are often applied to investors from strategic allies. At the same time, China itself is beginning to exercise various measures to protect home-grown technologies and address national security concerns from foreign investment. 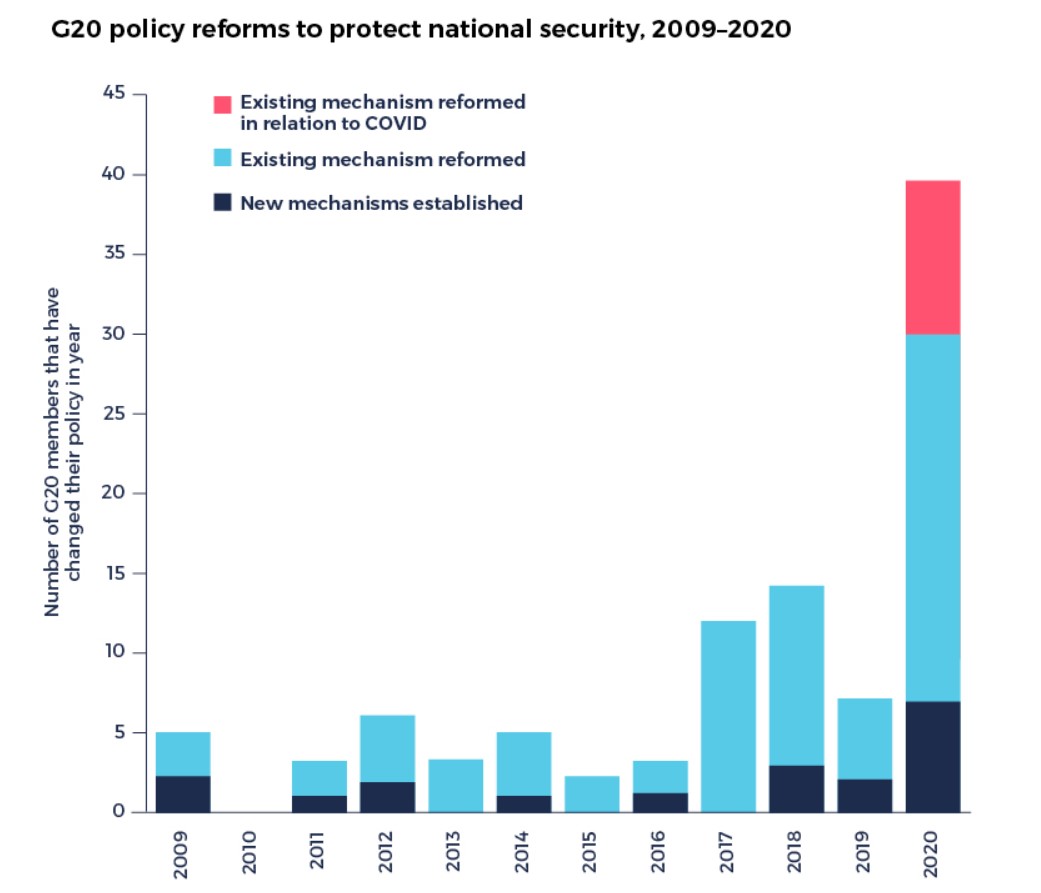 Globally, pharma, biotech and other health-related activities – which were added to FDI watchlists during the pandemic - are likely to remain in focus even as we move into the recovery period. In 2021 we also expect further expansion of FDI restrictions, including in the UK where a mandatory and suspensory regime, which does not have any financial or share-of-supply trigger thresholds, is set to be introduced. While the measures are due to enter into force in the spring, any acquisitions launched after 12 November could be subject to retrospective ‘call in’ review and remedies. Other jurisdictions to watch in 2021 include Australia, Austria, Belgium, Ireland, the Netherlands and Poland.

For deal-makers, the fast-moving nature of FDI restrictions can make potential issues hard to spot in diligence. Concerns can arise in seemingly minor parts of the target’s business, such as small or even unprofitable government supply contracts. This unpredictability should be carefully weighed in risk allocation mechanics and long-stop dates because standstill obligations and sanctions for gun-jumping mean that transactions cannot move ahead while agencies are investigating.

The good news is that many FDI concerns can be addressed via behavioural remedies (for example carve-outs of activities to prevent access to sensitive technology or data), but the bad news is that these measures can have a big impact on deal value and synergies in ways that can be hard to quantify at signing. From an execution perspective, buyers should be careful about accepting hell-or-high-water clauses or ‘catch all’ efforts obligations covering antitrust and FDI risk. However, the fact that there was a significant increase in FDI into sensitive sectors in the second half of 2020 shows that deals are still possible – with the right strategy.