This article reviews and highlights the new individual income tax rules and major tax rules issued in 2019, which may impact on foreign companies doing business in China.Guidance issued for IIT treatment of foreign individuals

ThePRC Individual Income Tax Law (IIT Law) (中华人民共和国个人所得税法) and its Implementing Regulations (中华人民共和国个人所得税法实施条例) were revised in the second half of 2018 and became effective on Jan. 1, 2019. They have profoundly influenced all individual taxpayers and reshaped China’s individual income tax (IIT) regime. At the start of 2019, the long-awaited guidance was issued, which further clarifies the IIT treatment of foreign individuals with no domicile in China.

In March 2019, the Ministry of Finance (MOF) and State Administration of Taxation (SAT) released MOF/SAT Announcement [2019] No.34, Announcement on the Criteria for Determining the Duration of Residency of Individuals Without a Domicile in China (关于在中国境内无住所的个人居住时间判定标准的公告), and No.35,Announcement on Individual Income Tax Policy Relevant to Non-Tax-Resident Individuals and Tax-Resident Individuals Without a Domicile (关于非居民个人和无住所居民个人有关个人所得税政策的公告), which provide detailed and systematic guidance in respect of IIT treatment of foreign individuals (New Guidance). Highlights of the New Guidance are summarized as follows:

According to the revised IIT Law, a foreign individual is regarded as a tax-resident individual in China, if he or she has domicile in China or resides in China for (an accumulated) 183 days or more within a tax year. As a result, he or she may be subject to IIT in China on income sourced worldwide, unless otherwise stipulated.

The New Guidance further clarifies that a domicile refers to habitual residence rather than a physical dwelling. Therefore, a foreign individual who lives in China because of study, work, family visit, holiday, etc. but plans on returning to a foreign country/region subsequently, will not be considered as having a domicile in China, even though he or she may own a residential property in China.

Additionally, in order to determine the “183 days” threshold, the New Guidance clarifies that if a foreign individual is physically present in China for less than 24 hours in a day, the day would not be counted towards the days of residing in China. For instance, a foreign individual who lives in Hong Kong but works in Shenzhen is not regarded as a tax-resident individual if he arrives to work in Shenzhen every Monday morning and returns to Hong Kong every Friday evening because he only resides in China three days per week or 156 days within the tax year.

The New Guidance allows time apportionment for a foreign individual’s employment income based upon the number of working days in China and/or the income paid or assumed by a Chinese employer. Using this approach, a lower progressive IIT rate applies to time-apportioned taxable income and thus the IIT burden of the foreign individual is reduced.

Similar to the old rules, the New Guidance also provides IIT exemption for a foreign individual on his or her income sourced outside of China and paid by a foreign entity or individual. However, the New Guidance further lowers the threshold for such exemption. A foreign individual is entitled to such IIT exemption, if he or she resides in China for less than 183 days or leaves China for more than 30 days upon a single departure within any year(s) in the last six consecutive years. Additionally, for such a purpose, the six-year period is calculated from Jan. 1, 2019 and therefore, the number of days that a foreign individual has resided in China before 2019 would not be taken into account.

New Guidance also clarifies the IIT treatment of employment income derived by foreign individuals working in China, which is summarized in the following table (provided that the foreign individuals are not directors, supervisors and other senior personnel of Chinese tax-resident enterprises). 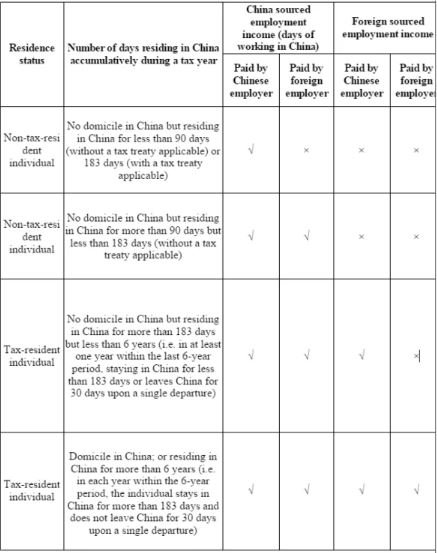 On Aug. 26, 2019, the PRC Resource Tax Law (中华人民共和国资源税法) was released with an effective date of Sept. 1, 2020, which provides a formal legal basis for taxation on the exploitation of natural resources with the aim of better protecting the environment nationwide. The resource tax will be levied on the basis of a sales turnover or volume/tonnage with different rates applicable, depending on the specific category of natural resources. The taxable resources include energy minerals, metallic minerals, non-metallic minerals, mineral water gas and salt.

In order to adopt the consolidated EIT filing approach, some conditions are required to be satisfied. For example, Establishments should not pay EIT on a deemed profit basis, and should be able to accurately calculate the allocated payable EIT. Furthermore, the consolidated EIT filing should be made by the main establishment of the non-tax-resident enterprise, which should assume supervisory and administrative responsibilities for the operation of other Establishments, and also maintain complete accounting books and vouchers that accurately reflect its income, costs and expenses, losses, etc.

The calculation and payment of EIT under the consolidated approach must follow the same method as the EIT consolidation between a tax-resident enterprise and its branches in China, unless otherwise stipulated. Although the new approach may achieve a tax-saving result, it is expected that taking this approach may increase the tax compliance burden of non-tax-resident enterprises and raise new challenges on their internal tax risk control.

The New Rules also clarify the liabilities assumed by non-tax-resident taxpayers and their tax withholding agents. In general, if non-tax-resident taxpayers are not entitled to but have enjoyed the treaty benefits, they are required to pay late payment interest, as well as the underpaid tax. The tax withholding agents are only liable if they fail to conduct the withholding tax filing in accordance with the New Rules or fail to provide relevant materials within the prescribed time limit or cooperate with the tax authority during the tax authority’s follow-up examination or investigation.

Under the new IIT Law and its Implementing Regulations, the new 183-days threshold replaces the one-year threshold as stipulated under the old rules, i.e. a foreign individual is regarded as a tax-resident individual in China, if he/she resides in China for 183 days or more accumulatively within a tax year. Due to this change, SAT Announcement [2019] No.17, Announcement on Revising Matters Relevant to Chinese Tax Residency Certificates (关于调整《中国税收居民身份证明》有关事项的公告) was released on April 1, 2019 to make certain adjustments on the documents required for the issuance of a tax residency certificate.

In 2019, value-added tax (VAT) reform was moved forward with more measures issued. These measures were first unveiled in the 2019 Work Report of the Chinese Government by Premier Li Keqiang, and further published on March 21, 2019 in Announcement [2019] No.39, Announcement on Intensifying Relevant Policies on Value-Added Tax Reform (关于深化增值税改革有关政策的公告) jointly issued by MOF, SAT and the General Administration of Customs. Furthermore, on Sept. 30, 2019, MOF and SAT released MOF/SAT Announcement [2019] No.87, Announcement on Clarifying the Policy of Super-deduction of Value-added Tax on Daily Life Services(关于明确生活性服务业增值税加计抵减政策的公告). The key purpose of the VAT reform in 2019 is to stimulate the economic development in China by further reducing the VAT burden for all industries.

The significant changes introduced by the new VAT rules mainly include:

a) the reduction of VAT rates from 16% and 10% to 13% and 9% respectively, and the export VAT refund rates are also reduced;b) an additional 10% super input VAT credit granted to the taxpayers providing postal services, telecommunication services and modern services from April 1, 2019 to Dec. 31, 2021, as well as 15% super input VAT credit to lifestyle services from Oct. 1, 2019 to Dec. 31, 2021, provided that the sum of the sales revenue generated from such services exceeds 50% of the total sales revenue of the VAT taxpayers;

c) the one-off recovery of input VAT incurred for the purchase of immovable property starting from April 1, 2019; and

d) input VAT for domestic passenger transportation services is allowed to be credited against output VAT based on specific documentary evidence for travel expenses.

The implementation of the new VAT rules would undoubtedly bring more tax benefits to taxpayers who welcome the move. In the meantime, taxpayers must also take action to implement the newly released VAT rules, modify their business arrangements if necessary and adjust their tax compliance system in order to enjoy the benefits granted by the new rules in a proactive manner.

（This article was originally published by China Law & Practice in January 2020.）