The UK Patent Box scheme was introduced in April 2013 and allows UK companies to elect to pay a reduced rate of corporation tax on profits derived from the exploitation of patents and certain other types of intellectual property (eg, supplementary protection certificates (SPCs) for pharmaceutical products).

A company must satisfy three basic criteria to benefit from the scheme:

In effect, the Patent Box allows for a 10% corporate tax rate, rather than 20%, on qualifying profits derived from UK or European patents.

However, in an October 2015 report, the Organisation for Economic Cooperation and Development identified the UK Patent Box as being a “harmful tax practice”. In response, the UK government announced a consultation and published draft legislation in December 2015.

The reason for the change in legislation was that the original legislation did not require a claimant for tax relief to carry out any R&D in the United Kingdom. Following the introduction of the Patent Box, a number of multinational companies sought to take advantage of the regime by relocating their tax domicile to the United Kingdom, prompting some EU states, most notably Germany, to claim that the UK Patent Box scheme could provide scope for abusive tax avoidance practices.

The updated UK Patent Box regime, which has been in force since 1 July 2016, introduces a ‘modified nexus approach’ by which the amount of tax relief available will depend on the extent to which the R&D leading to the patented invention (or a product embodying it) was carried out in the United Kingdom. Some of the R&D may be outsourced or acquired, but to a cap of 30% of the qualifying expenditure only. The hope was that this would allow the Patent Box to fulfil its intended purpose, namely incentivising innovative companies to develop new patented products in the United Kingdom more successfully, while minimising the opportunity for harmful tax avoidance.

Although the old Patent Box regime was replaced by the new regime on 1 July 2016, transitional provisions mean that companies that had already entered the scheme before this date (ie, by 30 June 2016) can continue to benefit from the old rules until 30 June 2021.

How have the changes been received?

Since the election to benefit from the Patent Box is made up to two years after the end of the accounting period in which the relevant profits and income arose, there is currently limited data available on how the 2016 changes have affected the scheme and its participants.

However, in September 2018, HM Revenue & Customs (HMRC) published updated statistics on the uptake of the Patent Box that included partial statistics for the 2016 to 2017 fiscal year based on claims made up to the end of the first quarter of the second year after the end of the accounting period (claims made up to and including 30 June 2018). This data gives us a first indication as to how companies of all sizes and across all industry sectors might be responding to the 2016 changes.

The key message communicated in the HMRC publication is that the total value of the relief claimed through the Patent Box regime continues to grow year-on-year, as it has done since 2013.

Figure 1: Value of relief claimed under the Patent Box (£ million) 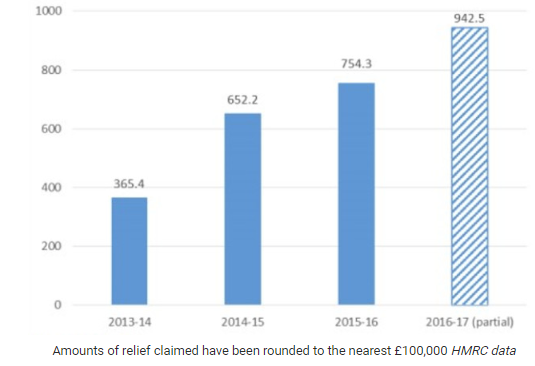 While the number of companies claiming relief from 2016 to 2017 appears to have fallen since the previous year, HMRC indicates that these statistics are based on partial data and are expected to be revised upwards when a complete set of data becomes available.

One reason for this could be the increased complexity of the tax reduction calculations since the 2016 changes and the associated cost and effort of ensuring compliance. Critics of the 2016 changes pointed out that they could penalise small and medium-sized enterprises with limited resources and it is possible that this is happening.

A further HMRC update is expected in Autumn 2019 and it will be interesting to see whether this trend continues.