The Internal Revenue Service (IRS) published proposed regulations on December 20, 2019, under Section 162(m) of the Internal Revenue Code (Code), which implement the amendments to Section 162(m) set forth by the 2017 Tax Cuts and Jobs Act (the 2017 Tax Act). The proposed regulations incorporate guidance provided by Notice 2018-68 that was published on August 21, 2018, and further clarify the definitions of the terms “publicly held corporation” and “covered employee” and the application of the grandfather rule under Section 162(m).

As a follow-up to our previous LawFlash, which analyzed the provisions of Notice 2018-68 in detail, we have outlined below key provisions of the proposed regulations.

Overview of Section 162(M) and the Proposed Regulations

Code Section 162(m) disallows a tax deduction by a publicly held corporation for a covered employee’s compensation to the extent that such compensation for the taxable year exceeds $1 million. Among other changes, the 2017 Tax Act amended Section 162(m) to remove the exception for performance-based compensation from the non-deductibility limit. The 2017 Tax Act also amended the definitions of “covered employee,” “publicly held corporation,” and “applicable employee remuneration” under Section 162(m). On August 21, 2018, IRS released Notice 2018-68 to set forth guidance on the amended rules. The December 20, 2019, proposed regulations incorporate most of the guidance provided in Notice 2018-68 and further elaborate on the key terms of Section 162(m), with a number of examples.

The proposed regulations include detailed rules for determining when subsidiaries, foreign private issuers, publicly traded partnerships, affiliated groups, disregarded entities, and qualified Subchapter S subsidiaries are considered publicly held corporations for purposes of Section 162(m), based on whether the entity or a member of its affiliated group issues securities required to be registered under Section 12 of the Exchange Act or is required to file reports under Section 15(d) of the Exchange Act. Examples include:

The proposed regulations generally follow the guidance set forth in Notice 2018-68, which was analyzed in detail in our previous LawFlash, for determining covered employees.

A covered employee means the following:

The proposed regulations incorporate the grandfather rule set forth in Notice 2018-68, with further clarifications. Under the grandfather rule, the 2017 Tax Act changes do not apply to remuneration that is provided pursuant to a written binding contract that was in effect on November 2, 2017, and that is not materially modified after that date. For purposes of the grandfather rule:

Remuneration is payable under a written binding contract that was in effect on November 2, 2017, only to the extent that the corporation is obligated under applicable law (for example, state contract law) to pay the remuneration under such contract if the employee performs services or satisfies the applicable vesting conditions.

The proposed regulations have numerous examples of situations that may or may not affect the grandfather rule. Examples include the following.

Earnings on Grandfathered Amounts. Earnings credited on grandfathered amounts after November 2, 2017, are grandfathered only if the corporation is obligated to pay the earnings under applicable law, pursuant to a written binding contract in effect on November 2, 2017. Under Code Section 409A, a nonqualified plan that is terminated (outside the context of a change in control) generally must postpone distribution for 12 months after the plan termination date. The proposed regulations provide that, with respect to a nonqualified deferred compensation plan, if the corporation is obligated under applicable law to continue to credit earnings on benefit accruals for 12 months following termination of the plan, such earnings will be grandfathered.

Severance Agreements. Severance payments are grandfathered only if the amount of severance is based on compensation elements that the employer is obligated to pay under a written binding contract in effect on November 2, 2017, that is not materially modified. Each component of a severance formula must be analyzed separately to determine the grandfathered amounts. For example, if the amount of severance is calculated as the sum of final base salary plus bonus, both components of severance are grandfathered only if, under applicable law, the corporation is obligated to pay both portions pursuant to a written binding contract in effect on November 2, 2017. If salary is increased by an amount that exceeds a reasonable, annual cost-of-living increase, the salary component of the severance payment will be considered materially modified, thus losing the grandfathered status.

Material Modification. A modification of a written binding contract that accelerates vesting is not considered a material modification.

Deferral Under Section 409A 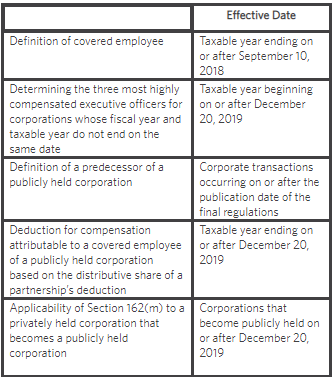