Will Australia renew its position on renewables?
Blog Connected World

The upcoming Australian federal election set for 21 May 2022 will play an important role in determining how rapidly the transition towards renewable energy occurs in Australia. Australia’s abundance of natural resources means it is perfectly placed to become a major clean energy producer and exporter. Wealthy developers and oil and gas companies operating in the region are expanding their investments into greener technologies.

There are however large question marks over Australia’s current offering as a jurisdiction for renewable and large-scale clean projects.[i] In a recent Clean Energy Investor survey, investors indicated they would like the government to address delays in new transmission network infrastructure investment, progress reform to marginal loss factors and implement an effective emissions reduction policy.[ii]

Under the 2016 Paris Agreement, governments are bound to work towards and finance low greenhouse gas projects and undertake economy-wide emission reduction targets.[iii] However, the Paris Agreement does not provide quantified targets; instead, countries are able to self-determine their approach. Emissions need to decrease by about 45% from 2010 levels by 2030, reaching net zero by around 2050.[iv]

The major political parties in Australia have put climate change at the forefront of their current election campaigns and differing emission goals have been set out. 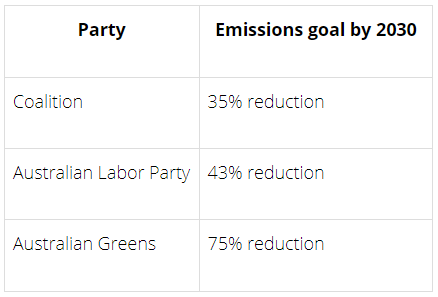 The Australian Labor Party maintains a net zero by 2050 goal and a commitment to reduce greenhouse gas emissions by 43% by 2030.The Morrison government has committed to “net zero by 2050” and during its campaign has announced $464 million in funding for eight “clean hydrogen hubs”. However, distinct from “green hydrogen”, the term “clean hydrogen” includes hydrogen generated from both renewables and fossil fuels through use of carbon capture and storage (CCS) technology.[v]

The Australian Greens have announced a plan to incentivise the uptake of solar and battery systems through the supply of grants and loans.[vi] They have also promised to create a 100 per cent publicly owned non-profit electricity retailer.

Uniting the states and territories

To achieve their emission reductions target, one critical challenge for the next government to overcome will be the relative lack of harmonisation between each state’s approach.

Tasmania, New South Wales and South Australia are heralded as leading the transition to renewables.[vii] The NSW government recently ran a registration of interest process for the ‘South-West Renewable Energy Zone’. Potential developers of wind, solar and storage projects responded with more than 34GW of proposals, being more than 10 times its likely capacity.[viii] By contrast, despite its abundance of solar resources, Queensland has been criticised for its slow level of uptake as it lags all other states in respect of its renewable electricity market share.[ix]

Some states and territories have entered into cross-party agreements as they work together towards reaching net zero.[x] However, there needs to be clearer federal direction. If the next government can unite the states and territories with cohesive policy, and collaborate on investment and use of infrastructure, Australia’s transition to renewables and its global reputation as a reliable export partner will be much enhanced.