The PTAB Pendulum Swings Back to Petitioners

The PTAB's institution rates have bounced back under Director Vidal, as discretionary denials have plummeted.

This Client Alert examines this PTAB trend and presents key takeaways for all parties, including defendants/petitioners as well as plaintiffs/patent owners.

When it was first formed in 2012, the PTAB was favorable to petitioners, instituting the large majority of petitions seeking Inter Partes Review (IPR) or Post Grant Review (PGR). However, the PTAB's IPR/PGR institution rate later declined thereafter, reaching a low of 56% in 2020.

Since then, the institution rate has been rebounding, as seen in the graphic on the following page: 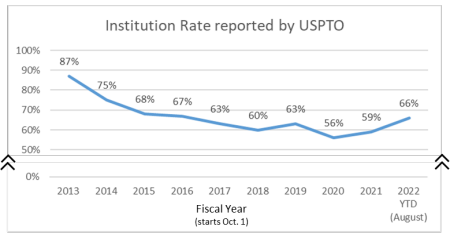 Today, the PTAB appears more petitioner-friendly -- at least at the institution stage. The US Patent and Trademark Office's (USPTO's) statistics above show that the institution rate is at its highest since 2016. And as mentioned at the outset, the institution rate in more recent months (i.e., from July 1, 2022, to date) is even higher, at 73%. Petitioners are enjoying their best chance in years of achieving IPR/PGR institution, further encouraging them to litigate validity at the PTAB. Conversely, patent owners need to carefully select which patent claims to assert in patent litigation with an eye toward surviving IPR/PGR. If the PTAB's final written decision in an instituted IPR/PGR confirms the patentability of any patent claims, those claims will be protected by a statutory estoppel3 that bars the petitioner/defendant from challenging their validity in court on any ground that was raised, or reasonably could have been raised, before the PTAB -- usually a significant advantage for the patent owner/plaintiff going forward, especially when the defendant does not have other invalidity defenses.

Discretionary denials occur when the PTAB exercises its discretion to deny what may otherwise be a meritorious petition for IPR or PGR. Under 35 U.S.C. 314(a), Congress does not require the PTAB to grant meritorious IPR/PGR petitions. And 35 U.S.C. 325(d) expressly allows the Director to deny a petition if "the same or substantially the same prior art or arguments previously were presented to the Office," e.g., to the patent examiner during prosecution.

The number of these discretionary denials peaked in 2020, the same year that the PTAB's institution rate reached its low point, as seen in the below graphic from Unified Patents:4 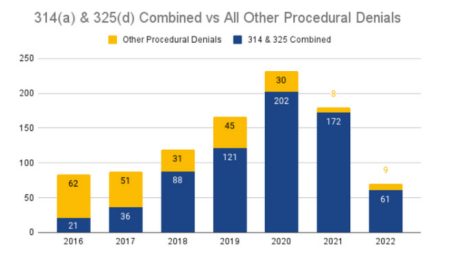 Many of the PTAB's 314 discretionary denials were due to its controversial Fintiv doctrine, which called for denying institution of a defendant's IPR/PGR petition if the defendant was concurrently litigating invalidity in district court or the ITC, and these other venues would reach validity before the PTAB could issue its final written decision.5 For defendants sued for patent infringement in the ITC, this typically meant IPRs/PGRs were off the table. However, Kathi Vidal, who was confirmed as USPTO Director in April 2022, scaled back the Fintiv doctrine shortly after taking charge. In a June 2022, memorandum,6 Director Vidal eliminated Fintiv denials based on ITC cases and stated that Fintiv denials are not appropriate if the petitioner established a "compelling" invalidity case or agreed to drop essentially all IPR-eligible (or PGReligible, if seeking PGR) defenses from the district court case if, and only if, the PTAB instituted review. 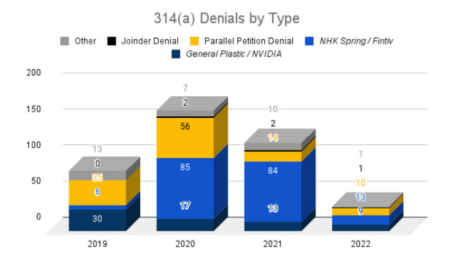 The drop in discretionary denials was particularly pronounced in the third quarter of calendar year 2022 -- the first full quarter since Director Vidal was confirmed:9 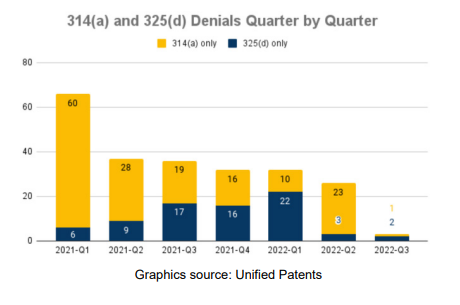 More patent litigation defendants may take advantage of IPRs and PGRs today than in the past several years due to Director Vidal's policy toward Fintiv. IPR/PGR is once again available to defendants sued in the ITC. Further, defendants are now guaranteed that Fintiv will not be an issue if they stipulate to drop IPR (or PGR) eligible defenses in district court or are able to present the PTAB with a "compelling" invalidity case. With more certainty as to what is required to overcome Fintiv, defendants can make more informed strategic decisions. Similarly, the drop in other types of discretionary denials provides defendants with higher institution rates, and more defendants might obtain a stay of their district court litigation pending IPR/PGR.

On the other hand, institution is not the end of an IPR or PGR. Defendants pay a high price for losing an instituted IPR/PGR. The PTAB's final written decision will trigger a statutory estoppel precluding the defendant/petitioner from raising invalidity defenses in court that it reasonably could have (or did) raise before the PTAB. However, that estoppel is not triggered if the PTAB merely declines to institute the petition, even if it does so on the merits.

Plaintiffs need to adjust their strategy in view of the PTAB's higher institution rate. Defendants are more likely to challenge validity at the PTAB, and the PTAB is more likely to institute review. Further, IPRs and PGRs will more often be decided on the merits rather than denied on the basis of discretionary factors.

When determining where to enforce their patents, plaintiffs should take into account each venue's likelihood of granting pre- and post-institution stays pending IPR/PGR. Plaintiffs can also take solace in knowing that any surviving patent claims will be subject to the IPR (or PGR) estoppel. But to get there, the patents must survive the PTAB. Plaintiffs should therefore select patent claims for assertion that are likely to withstand PTAB challenges and retain counsel to make tough strategic decisions that span the district court and/or ITC as well as the PTAB.