It has been an ambition of successive governments that it should be easier for first-time buyers to get on to the property ladder. On 6 August 2020, alongside the Planning White Paper, the government launched a consultation called Changes to the current planning system, setting out four proposals including how the government proposes to secure an affordable housing product which achieves this ambition. This product is called “First Homes”. The government first consulted on the design and delivery of First Homes earlier this year. The current consultation seeks views on the government’s proposals for implementing the scheme.

The government wants to implement First Homes as part of the current planning system in England, but also wants to take it forward into the new planning system proposed by the White Paper. However, this is not the first affordable housing product aimed at first-time buyers – the Starter Homes initiative was launched by the Coalition Government in 2014 and progressed by subsequent governments but, despite significant investment (including a £1.2 billion Starter Homes Land Fund), regulations to implement the scheme were never taken forward and no Starter Homes were ever built (see here for the NAO report on its investigation into Starter Homes).

What is the difference between First Homes and Starter Homes, to what extent will developers be required to include First Homes as part of their affordable housing offer, and what are the next steps?

Table 1 summarises the main attributes of both First Homes and Starter Homes. The products bear many similarities: both are aimed at first-time buyers with a mortgage who earn less than £90,000 in London and £80,000 in the rest of England; both are subject to a minimum discount below market value and an overall price cap; and both are available to Armed Forces personnel.

However, there are differences. To put it very simply, the government has beefed-up the Starter Homes offer significantly. First Homes must be offered at a greater discount below market value, in perpetuity. There is also a compulsory requirement – a minimum of 25% of all affordable housing units secured through section 106 obligations must be First Homes, whether on-site, through cash in-lieu or as a combination of the two. First Homes must take priority over other affordable housing products. There may be an exemption for Build to Rent schemes, and also an exemption from CIL (once regulations have been implemented), but otherwise all schemes delivering affordable housing through section 106 obligations will be affected. This will have a major impact on the range of affordable housing tenures provided by developers and particularly on the provision of social housing and other affordable rented products.

Another significant difference between Starter Homes and First Homes is the “local connection” requirement for First Homes buyers. The Starter Home requirement that a first-time buyer must be under 40 has gone, but local planning authorities can require that developers must market First Homes to local buyers only (with the exception of Armed Forces personnel) for three months before the units can be sold to first-time buyers outwith the local area. 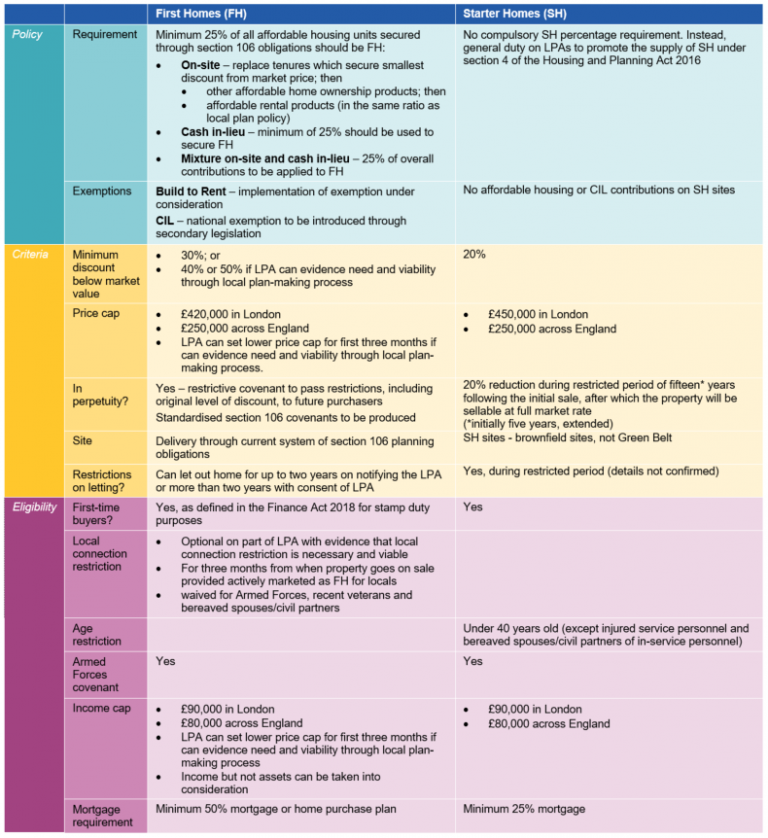 The government intends to implement First Homes through changes to national policy and by producing standardised wording for section 106 agreements. However, as it wants consistent implementation by local authorities across England, it acknowledges that primary legislation may be necessary, which will presumably be achieved through the Planning White Paper reforms. These reforms certainly include the “significant reforms to developer contributions” that the consultation refers to as another next step – the Planning White Paper proposes to replace both CIL and section 106 affordable housing contributions with a new Infrastructure Levy – although if First Homes are implemented before this then changes to the CIL Regulations 2010 will be needed to introduce the promised exemption for First Homes from CIL.

The principle that developers will have to provide First Homes seems established, albeit that the same had been said for Starter Homes. Developers do, however, still have an opportunity to comment on the following aspects of the First Homes policy by responding to the Changes to the current planning system consultation:

The consultation closes on 1 October 2020.