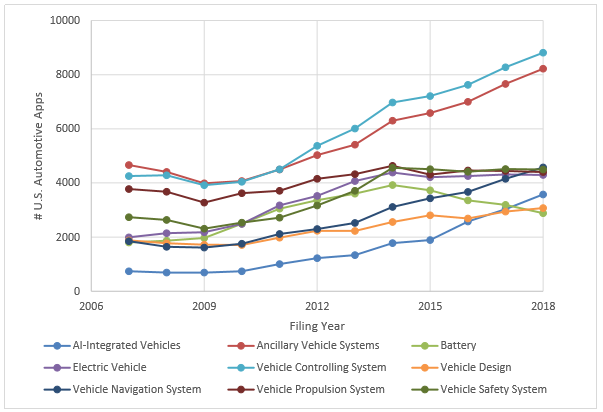 As with all change, this shift towards software-based automotive segments creates both opportunity and risk for companies and products in the automotive space. In contrast to more traditional automotive technology segments that are very developed and crowded, software-based segments provide open space that will allow for broader patent protection. Because of the newness of the software-based segments, the possibility of patenting foundational technology providing significant competitive advantage is higher than in the traditional automotive technology segments. And, a company with patents for such foundational technology will have opportunity to leverage those patents into increased market dominance.

Regardless of the source of the upheaval in the automotive industry, automotive companies seeking to maintain a competitive advantage should address the risks of the shifting market with a forward-looking patent strategy that embraces the shifting market by emphasizing and expanding protection of software-based technologies. This forward-looking patent strategy will require a change in patent practitioners in the automotive space from individuals with heavy mechanical engineering competence towards individuals with software and hybrid mechanical/software competence.