Significant changes to the regulation of Australian plant breeders’ rights ("PBR") are currently before the Federal Parliament. Those changes are anticipated to provide greater certainty and valuable commercial outcomes for rights holders as well as encourage greater investment in the agricultural sector. This AgriThinking article describes those changes and the potential benefits.

The changes to the Plant Breeder’s Rights Act 1994 (Cth) (“PBR Act”) appear in the Intellectual Property Laws Amendment (Productivity Commission Response Part 1 and Other Measures) Bill 2018 (Cth) (the “Bill”). The changes broadly cover the grant of rights, scope of protection, enforcement and remedies.

The ability of multiple plant breeders to jointly own PBR will be clarified via amendments to section 45 of the PBR Act. The reference to “two breeders” lodging a joint PBR application under the current form of this provision will be removed to clearly accommodate circumstances where multiple breeders may wish to make (and be granted) a joint application. This amendment will bring the PBR Act in line with the current common practice of collaboration between multiple parties in developing new plant varieties.

Under the current arrangements, the PBR owner of an initial registered variety can only seek an EDV declaration in respect of a second variety if it is the subject of an application, or the grant, of a PBR. Consequently, it has been possible for follow-on breeders to avoid an EDV declaration simply by not seeking any formal PBR protection for the second variety. Under the proposed amendments, PBR owners may apply for an EDV declaration for EDV that are non-PBR protected, thereby extending the opportunities for original plant breeders to exercise their exclusive rights in the initial variety.

The removal of this loophole that allows others to “free-load” on the work of original plant breeders is likely to increase investment, productivity and profitability as breeders and their commercial partners, including exclusive licensees, will have greater certainty not only in terms of the scope of protection for the variety but also the remedies against possible infringers.

Enforcement – exclusive licensees to have standing to sue

For many parties that have entered into exclusive licensing agreements with PBR owners, these changes will provide greater scope for control over how they may wish to enforce their rights. Being able to litigate will be especially relevant for the commercial partners of government-funded research and development centres, State Governments or other statutory authorities. Although the latter are owners of extensive IP portfolios, including PBRs, they often are not well placed to pursue infringement actions for commercial and other reasons.

Notably, while the proposed amendments provide an automatic right to the exclusive licensee to bring an action for infringement, it will be open to the PBR owner to limit that right in the licence agreement. In any event, the licence agreement will need to address issues such as identifying the party responsible for initiating infringement proceedings, the responsibility of certain parties to participate and the level of participation in the conduct of the proceeding, as well as other control and costs sharing measures.

The Bill introduces a significant change to the quantum of damages that may be awarded for infringement of PBR by allowing the award of “additional” damages. Currently, courts are only permitted to award damages for the actual loss suffered. The proposed amendments will permit the courts to award additional damages if appropriate, having regard to the flagrancy of the infringement, the need to deter, the conduct of the infringing party, the benefit to the infringing party and other relevant matters.

The proposed amendments to the PBR Act bring overdue and important changes to the PBR regime that will not only strengthen the value in PBR, but will provide breeders and their commercial partners with far greater ability to protect and enforce their R&D and commercialisation investments. Stay tuned as we will report on the progress of the Bill.

How the amendments will impact the PBR process 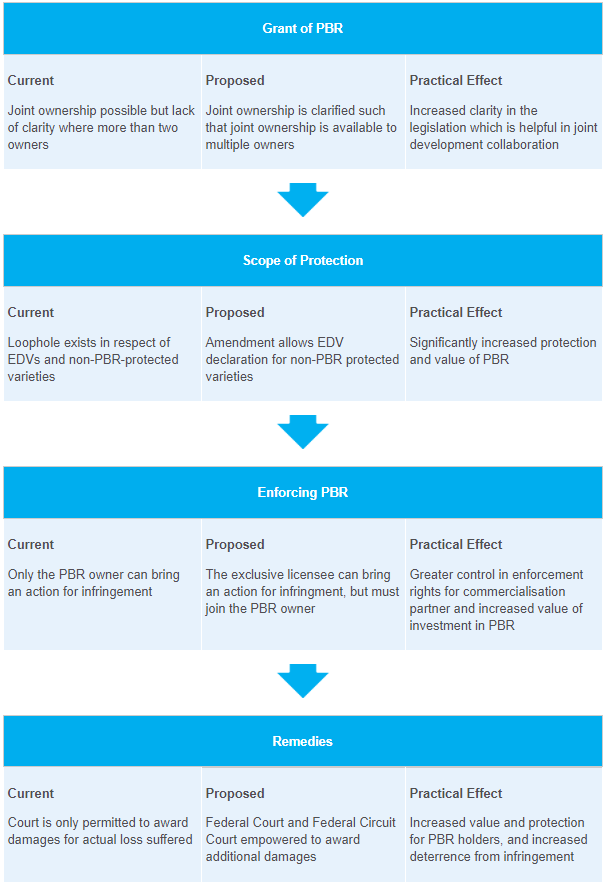